It's often difficult to cope and find support when your child has an uncommon or rare condition. Often, there is little understanding by the GP and no more than that at the local hospital either. This means travelling long distances with a poorly child to see a specialist. Support groups, even tiny ones, are especially vital.

Unlike cancer or other serious, but more common conditions, there are few researchers and little money invested when relatively few people stand to benefit from research into a particular rare disease. It is changing though, and the collagen disorder that my sons and I have, Ehlers Danlos syndrome, is one that is benefitting and we are finding that one type of EDS, Hypermobility, is far from as rare as it was believed.

Today, mum Angela talks about her daughter, Mayo, who has HEDS and her difficulties with living with the condition. You'll find resources at the end. 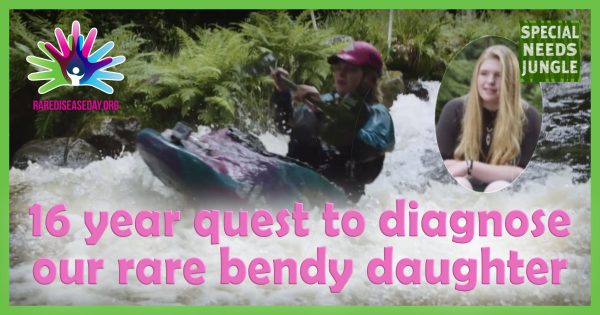 My daughter Mayo (Maya-Ray), unbeknown to us, started showing symptoms very early on of Hypermobile joints. I think her first dislocation or more likely subluxation (partial dislocation) was of her left elbow with no trauma. She was in her walkie chair, all fine one moment then screaming the next with her arm held at an odd angle.

We decided to take her to the hospital but as we picked her up she returned to her happy usual self and her arm was fine. At the time we didn't realise what this was the start of. Mayo was very strong and advanced for her age, reaching all milestones early which doesn't really fit in with a diagnoses of HEDS (also known as Hypermobility syndrome or EDS Type 3). She was walking at 10 months and has always been at the top end of the scale for her height and weight but she had lots of niggly illnesses and suspected Meningitis twice and rushed in hospital because of it.

We then realised that at the slightest sign of a virus, Mayo got the rash!! She still does get lots of rashes when feeling unwell. She had chicken pox quite badly and has been left with a couple of deep scars despite us doing everything that we could to protect her skin. The worst thing was as Mayo turned two, her behaviour went off the scale! Tantrums, violent towards me, she was very hard to settle and could be wake all night at times.

This is when we started to look into the effects of food additives on behaviour as she also had eczema and lots of ear infections. We started to limit additives, sugar and dairy products. The ear infections eczema and behaviour all improved, but I found I needed more help to make sure I was doing the right thing. We were referred to a local paediatrician who was quite happy with what we were doing. By this time, other things started to show up, as in Mayo was always tired, she complained of pain in her knees and legs, she walked into things all the time and was often on the floor after falling. She had her own accident book at school that was left out as they needed it that often.

Bendiest kid, but concerns brushed off

When we asked the Paediatrician about these things, he examined Mayo and said she was one of the bendiest kids he had seen. He also stated her height and her growth rate could cause issues with co-ordination. He sent us for a physiotherapy review. This was very interesting as the ladies who were doing the assessment had to stop it part way through as they were worried about Mayo dislocating her shoulders, thumbs, fingers and toes. We didn't see what they were saying at first as both myself and my husband are now both diagnosed as having HEDS, so the extra joint movement was normal to us.

We came away from this with a diagnoses of EDS Hypermobility, confirmed by the paediatrician, Mayo was about seven by this time. Next came Mayo's shoulder issues after experiencing several subluxes and a dislocation needing stays in hospital, but our concerns were brushed off. One specialist told us Mayo's shoulder was damaged, would always be damaged and that she would never be able to kayak again. We had just bought her her own boat, it was the thing that kept her going. We were referred to another shoulder specialist who was amazing, but to be honest by this time I was taking no crap. We went in and I asked him to just listen to what I had to say, and he did! He pulled up a chair, we told him everything that had been going on and he took it all in. When it came to examining Mayo he dropped her shoulder out of the socket and put it back in and once again confirmed the diagnoses of HEDS. He referred us to Alder Hey Rheumatology department.

This is where the fun really began, this doctor decided that, in his opinion, Mayo wasn't in pain, she was just playing up because she didn't want to go to school. He said she wasn't hypermobile, even though we already had a diagnoses, but we should go to see the physio who is a specialist hypermobility physio!

He dismissed the issues Mayo was having with her back, her shoulder and some visible veins that were appearing and told us to get on with it. As you can imagine we were fuming! We asked for a second opinion and went to a different hospital for this. The next doctor again confirmed EDS Hypermobility, and got Podiatry, Genetics and Endocrinology involved. It seemed like we were getting somewhere, until Genetics disagreed with the EDS diagnoses, Endocrinology started to go down all other different routes and things started to escalate. We then got to a point again where they all agreed Mayo has lots of issues, but nothing was showing up in tests. So back to the HEDS diagnoses.

We went back to Alder Hey, but requested a different rheumatologist and this one agreed with the original EDS diagnoses, ordered a MRI for back pain, chased up a referral to a vascular surgeon about the abnormal veins, agreed that Mayo's knee was damaged and basically affirmed our belief that all was not good.  Alongside of all this, Mayo was having a horrible time at school being bullied, was in lots of pain was emotional, anxious, lots of irrational fears and was basically struggling. We changed schools and within weeks there was a question mark put over her, as in did she have dyspraxia? The diagnoses for this was surprisingly easy compared with what we have gone through with the EDS. Dyspraxia and EDS are often co-morbid conditions.

The results of Mayo's MRI showed that she had a tethered spinal cord which is also much more common in the EDS population. This started off another round of tests, Mayo was diagnosed with a problem with her bladder after having a urodynamic test and was scheduled for surgery to de-tether her spinal cord. After finally getting to the vascular team, her vein issue was diagnosed as a very rare disorder called Blue Rubber Bleb Nevus Syndrome.

The first rheumatologist we saw missed all this. Where would we have been if we had just taken his word and not asked for second opinions? Other things started to show problems and we also saw a gastroenterologist to see if we could get to the bottom of the stomach issues Mayo has. Our lives seemed to be a constant round of different hospital appointments and different doctors all with different opinions, each trying to over rule the last. After a successful de-tethering surgery, more referrals came along to neurology, genetics, dietician and also to the specialist EDS diagnostic team in Sheffield.

More time goes by, with no complete answers

The Neurologist doesn't think that EDS is the only thing going on causing all Mayo's issues, but has told us he may never be able to give us a complete diagnosis. Genetics and the specialist clinics in Sheffield both agree on Hypermobility EDS.

Gastro still don't have a clue what's going on, even after all the diets we have tried and being on a nasal gastric tube for five weeks. The only thing they can be sure of is it isn't a food allergy that's causing the pain that she has and maybe it is EDS-related with the effect that EDS has on the gut muscles and maybe some nerve issue. They are now referring us to the adult team as she is now nearly 16.

Rheumatology, meanwhile, have signed us off! She was seen about the discolouration to her hands and feet, dizziness and fatigue. These are all symptoms of PoTS (Postural Orthostatic Tachycardia syndrome, often seen alongside Ehlers Danlos syndrome)

The Cardiology department wants to see Mayo in another couple of years to review her slightly leaking heart valve, they brushed off her PoTs symptoms and said they don't do Tilt-table tests as they are unreliable, even though this is the usual test for PoTS.

We have a new appointment coming up with a new specialist for Mayo's back pain. The neurosurgeon who reviewed Mayo's last MRIs has diagnosed her with Sheuermanns disease, which may be why she has so much back pain and why the top of her back curves forward; we have been told for years it was just bad posture. This could have been seen on her first MRI but was missed. Treatment could have started for this earlier to help with the pain. There is a possibility of Mayo needing further surgery to straighten her spine.

There is still a huge list of issues that Mayo has that either get brushed off, or get put down to her EDS without really investigating what's going on. We are hoping the neurologist will come up with some answers to why she has problems with her left side. Her left leg keeps going numb and tingly, giving way at the worst possible times.

You must never give up pushing for your child, if you are quite positive in your heart of hearts that things aren't quite don't give up. Even if a Doctor dismisses you and you aren't happy push for a second opinion. You know your child better than anyone. I don't know what state Mayo would be in now if we had listened to the first rheumatolagist.