This statistical first release (SFR) publishes data from the annual SEN2 data return, which is mandatory for local authorities to complete. The return is the only source of data to report on all statements of SEN and EHC plans maintained by individual local authorities.

All exciting stuff, given that we started the change to the Children and Families Act in September. How was it going?  Looking at the comments on our Facebook page and in a number of groups we are members of, we expected the figures to reflect that most Local Authorities appear to be challenged by the introduction of the new Act and instead of rushing in where angels fear to tread, they had been taking their time - hopefully just to ensure they are getting this right.

However, as soon as we started reading, we could feel our eyebrows starting to rise.  Surely these figures were inaccurate.  Maybe we were reading them wrong. Maybe we had misinterpreted  them. 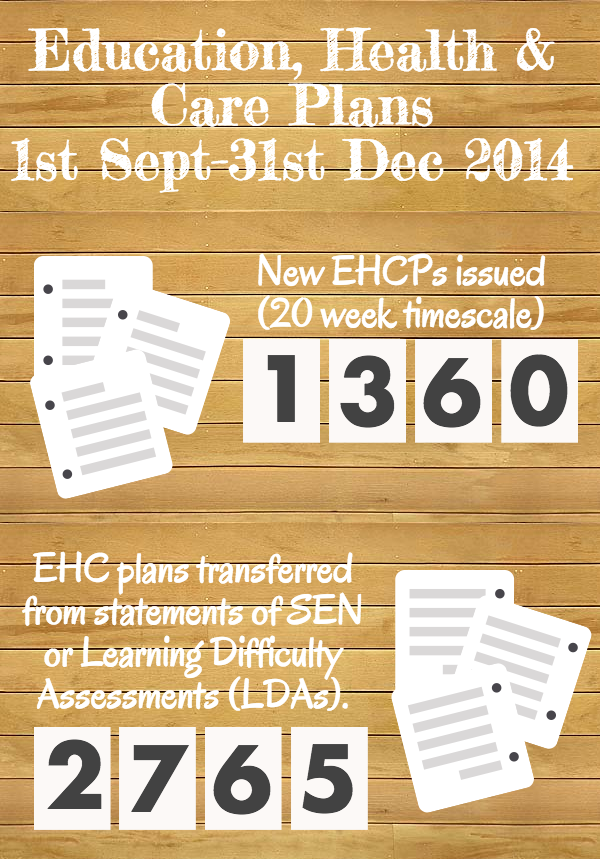 In big bold letters on the first page, they proudly announced

Transfer to EHC Plan (from Statement or LDA)

The number of EHC plans transferred from statements of SEN or Learning Difficulty Assessments (LDAs) was 2,765.

So to comply with the 14 weeks (for a statement) or 20 weeks from an LDA, in which to do this, this must mean that on 1 September, 2,765 families were contacted and given two weeks notice that the transfer assessment process was due to start and 2,765 families had assessments reviewed and new assessments carried out so that every part of the EHCP could be filled in, met with the school or LA to discuss their views and aspirations, and 2,765 EHC Plans were all finalised the week before Christmas. No one challenged, disagreed, took a bit longer to go through a draft plan, nothing. It was all tickety-boo.

Now, call me sceptical but I find it hard to comprehend how this happened?

What parents are saying to us

We are contacted, almost daily, by families who are experiencing problems with the transfer to EHC Plans.  Families being given the wrong information, families told that the transfer is merely a transfer of information from a statement to an EHC Plan, plans being sent to families that are not specified or quantified, families being told that the specifics only go in the final version and not to worry their pretty little heads about it, families starting the process and 26 weeks later still haven't received a draft Plan.  The list goes on.

Now, we are not so naive as to believe that the parents contacting us reflect the experience of every family out there, those who are very happy may just take their satisfaction and get on with their lives, but we have had enough contact to query whether the figures released by the DfE are a true reflection of the new process.  We appreciate that the DfE can only take the figures given to them by local authorities, but surely someone there must be scratching their head along with us?

If the figures are accurate then surely, there has to be a question of whether the new Plans are actually of good quality, were co-produced with families and are legal?  Do they comply with the Children and Families Act?  Have they followed the guidance in the 2014 Code of Practice? Or are they plans which have merely had the information from the Statement transferred over, without looking at whether the child's needs have changed?

What has your experience been?

Let us know, we really want to hear from you.

Get in touch, either by commenting below or by emailing us - info@specialneedsjungle.com

And we would especially really like to hear from any of the families who are proud owners of an EHC Plan by December 31 2014 that they are completely happy with because we would like to hear your experience. The DfE has promised to pass on some happy customers which we are really looking forward to because examples of good practice is sorely needed. If you are such a family, please tell us.

If you keep clicking through the links you’ll come to a DfE spreadsheet giving breakdown of figures by authority. Most of the transfers look as though they’ve been done by pathfinders as do (not had time to check thoroughly) most of the new plans. I’m an IS in a pathfinder LA not showing high figures. Every plan I’ve been involved with so far has had to be returned by parents for major amendment due to very poor quality. Therefore deadlines not met.

Had our transfer review (year 9) in November (no family feedback forms until after). Saw the paperwork that school were sending the SNO. Met SNO to explain why I thought ‘Mum thinks that….’ at each answer was not in the spirit!! Have heard nothing since. (It’s May). School hadn’t seemed to have any guidance to the paperwork (except having read the online guide where they download the paperwork) or introduction to person centred thinking and planning. No change in their aspirations for our kids that I could see. I’m in touch with lots of parents and even the Independent Advisors… Read more »

Strangely DfE state that ‘Of the new EHC plans issued in 2014, 64.3% were within the 20 week time limit when excluding exception cases’ – it makes no sense at all and as you say there weren’t 20 weeks from Sept – end Dec 2014, so the figure would have to be 100% for any plans issued in 2014! Ooops, sounds like somebody somewhere has made a bit of a mistake! Or the DfE has some magic weeks between Sept and Dec that we all don’t know about!

Interesting, looking at the transfers from statement/LDA to EHCP, it is only half of the LAs that managed to complete any transfers – so half the LAs transferred 2765 in total while the other half managed 0! Certainly looks like there are differences in the way LAs are working.

We have received an initial draft but No Specifications were included, No Supportive materials, equipments listed, Only initial diagnosis of ASD included, a confirmed diagnosis of DCD Dyspraxia mentioned within the report but not listed in section 2! Dyslexia screening carried out in 13 also mentioned but not listed. No further assessments re Diagnosis of Dyslexia carried out within test period, even though my son has made very little progress and failed to progress through the most recent bout of acceleread accelerwrite!!! We are now being offered a further in-house screening for Dyslexia with possibility of progressing to further phonological… Read more »

I’m with you Auntieh123 I have completed IPSEAS online training course, printed the New SEN Guidelines (Jan updated version) I can clearly read and comprehend what I am reading but as yet I have not seen an example of what a good plan looks like. As yet I suspect the plan being drawn up fails under lack of specification alone, then if you take into account the scant notice of meetings etc worst being at 7pm the day before EP was due to assess the following morning. Feels like a rushed shambles, awaiting the updated draft, plan to consult with… Read more »

I have today, after a long SIX MONTH wait since transfer review, received the terrible news that my child’s Statement of SEN will be ceased and he will not be transferred to EHCP. He has just one year of primary school left and all the professionals in his life are agreeing that he will not cope with mainstream secondary school but is far too cognitively able for a special school (ASD/Tourettes). He’s been with his TA for three years and has made so much progress, LA reasons for taking it away include his discharge from OT more than five years… Read more »

Michelle, contact IPSEA or SOS!SEN or the NAS advocacy line immediately!
The DfE said that NO child would lose their provision in a transfer unless it is no longer needed. You must appeal this decision with the SEND Tribunal.
For advice and help, one of these organisations above will be able to help. DO NOT accept this. The gatepost has not been moved, the criteria remain the same- the LA is acting illegally unless your child has improved so much he doesn’t meet criteria. “Some improvement” doesn’t sound like that.

Thanks Tania. Any improvement they see when comparing today to pre-statement is down to the coping mechanisms put in place by his current (amazing) school – my son’s needs exist today as they always have and always will. My LA have asked for comments off us and school, we have both written today stating our disagreement with their decision. I will definitely be appealing LA decision at tribunal should they overlook our comments. They’ve made written comment that one of the considering factors is my sons discharge from occupational therapy which I find to be a blanket policy and have… Read more »

Michelle, if you appeal then the LA must maintain the statement (i.e. continue with the provision) until the appeal is concluded. As Tania said, get some advice.

I have received my final EHC Plan, I have asked for ABA, now no ABA, no Speech Therapy for a completely non verbal child, no OT and no Physio, my so had 20 minutes of ST per week in his statement and 20 hours of OT for a year, now all gone, because I have asked for ABA. What shall I do now? my son didn’t make much progress, as he is still non verbal and severe on spectrum. Also my son had in his statement he needed someone with Sensory Integration Therapy but the school didn’t give him for… Read more »

You should ask to speak with the LA area SEN manager tomdiscuss your concerns. Contact your local IASS for local advice. Also, you might want to email our EHCP Transfer clinic via the website for more help

I think I wrote to you before about my daughter getting her transport to college placed within her EHC plan by the first tribunal. Update: my daughter did one year at college then the local authority withdrew transport so I spent the next year fighting using every process I could. I then thought if I asked for an EHC assessment I would be able to get to a tribunal. Of course I had to go to tribunal as the EHC assessment was nightmare, we or my daughter might not have existed as far as the local authority were concerned. Not… Read more »