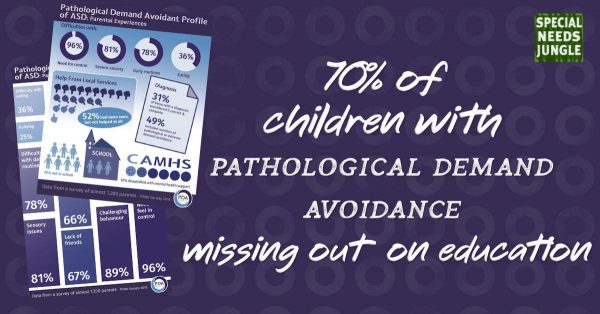 Pathological Demand Avoidance (PDA), a profile of the autistic spectrum, has been increasingly recognised in the medical profession in recent years. However, the same can't be said for how it is understood in schools.

The PDA society is marking its 2018 Action Day today by launching a report that shows how children with the condition are at particular risk of school refusal. Many schools and teachers don't know how to cope with this type of autistic behaviour which can also make it more likely that a child with PDA can face exclusion and mental health difficulties.

Vikki Threlfall of the PDA Society has written for us today about the report and in particular, the experiences of Arijana and her mum Danielle.

70% young people not in school or regularly struggle to attend

To mark PDA Action Day 2018, the PDA Society today published a report which reveals how a group of autistic people is at especially high risk of being misunderstood. The report, entitled “Being Misunderstood”, is based on the largest survey to date on the topic of PDA (Pathological Demand Avoidance, a profile on the autism spectrum).

One of the key findings was that 70% of young people are not in school or regularly struggle to attend.

“This is school refusal at much higher levels than you would expect to see in the ASD population as a whole,” comments Sally Russell OBE, who compiled the report. “This report makes clear that this complex and unusual profile of autism is leading to individuals and their families being completely misunderstood, resulting in extremely poor outcomes for so many.” 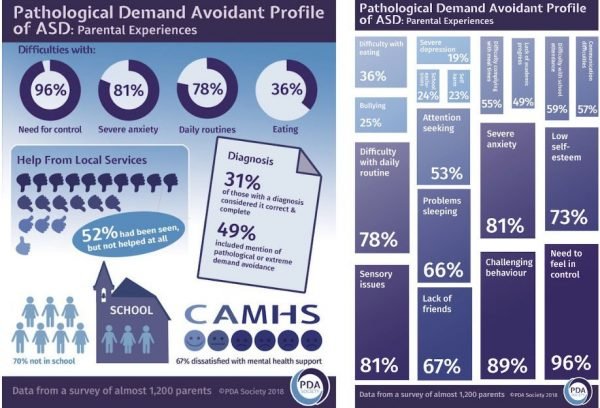 Examples of best practice are few and far between, but where they exist they provide a glimmer of hope and show what can be achieved once the right approach is implemented. Successful placements necessitate a close working partnership between school and home, a whole school approach with strong support from the leadership team, a genuine commitment to inclusion and a positive, flexible approach.

A school for Arijana

From the moment Arijana started school her family was catapulted into crisis with a continuum of school refusals, violent meltdowns and exclusions, resulting in two failed placements before the age of 6. Mum Danielle self-referred to social services out of desperation following Arijana’s plummeting mental health and attempted suicide. It was at a Child in Need meeting that the new Principal of Jupiter Community Free School in Hemel Hempstead, Neil Jones, was introduced to the family.

“There was a sense of impending helplessness and that if we didn’t do something differently, the cycle would most likely repeat,” explains Neil. “As a Free School, we have some freedom to build our curriculum and culture and in this context we have developed an open approach to SEND and a nurturing, rather than a behaviourist, approach to children's well-being.”

Both school and Mum were apprehensive and Arijana’s re-integration was planned extremely carefully, combining input from various sources. The school considered Danielle to be the go-to expert on her daughter and combined her guidance with feedback from the agencies involved in Arijana’s case and the recommended best practice guidelines for educating a child with PDA, together with their own highly nurturing approach.

“We adopted an open, growth mindset approach to managing Arijana's needs. Put very simply, the approach is about compassion and love. We don't blame or judge or impose our bias,” Neil explains. “Whilst put like that it sounds so simple, it is actually a rather challenging concept to embrace! But the staff have been magnificent in projecting patience and very low threat towards Arijana.”

Initially, Arijana had a few short visits together with Mum and began to feel excited about the prospect of returning to school. Next, a decision was made to work backwards through the school day - so that Arijana could feel more connected with her peers, she attended just for the last 45 minutes of the day and left at normal home time along with her classmates. Little by little, the amount of time Arijana spent at school increased until she was nearly achieving entire afternoons in school.

Key to success was finding a suitable 1:1 teaching assistant for Arijana, and fortunately one of the existing school team fully embraced the opportunity, displaying an innate skill and subtlety interacting with Arijana. By following Arijana’s lead and taking a gentle mentoring approach, a trusting relationship began to blossom and her TA was allowed to take the lead in developing an individualised plan.

The school team decided to adopt an Early Years Foundation Stage approach to recording and assessing Arijana’s academic progress by using a Learning Journal. Working from Arijana’s interests and encouraging time spent with her class as much as possible, everything Arijana achieves is photographed or placed in her journal.

“We’re taking slow, small steps but I feel that this nurturing placement is Arijana’s best chance of success and rectifying the damage of the past,” enthuses Danielle. “I feel fully included as part of a collaborative team around Arijana, so some of my faith in the system that had utterly failed us previously is being restored too.”

“The approach is totally flexible and doesn’t always go to plan,” adds Neil. “Looking ahead, the aim is for Arijana to attend full time. When? We’re not sure yet. We’ve learned that we’re not going to get there quickly, but we shall get there. We have to keep an open mind that the definition of ‘there’ may also change over time! Our whole-school approach really sets the tone - not only to achieve the successes so far with Arijana but also to seek similar outcomes for other children with behaviour and communication challenges. A rising tide gathers all ships!”

Other findings from the report include:

The PDA Society hopes that the survey will be a wake-up call to all those supporting and providing services to the autistic community.

The report makes clear that lack of acceptance and understanding of the PDA profile is the biggest barrier to accessing support. For outcomes to improve, professionals need to know that they can speak openly about this group of autistic people using unambiguous terminology and, most importantly, promote appropriate strategies. For this to happen, local leaders of services for autistic people must frame the way this profile can be managed – this is likely to be best achieved through the publication of a position statement for professionals and service users along with resources for staff development. The report concludes with detailed recommendations for improved support across all sectors.