We all know that money's tight in public services, not least in providing for children with disabilities. It's not surprising local authorities want to avoid shelling out lots of money if they can get away with it. But parents are, of course, just as reluctant to let LAs get away with not providing the education to which their children are legally entitled.

There is a high emotional and often financial cost to parents when they're forced to take their LA to the First Tier SEND Tribunal to get that provision. It's also certainly not free for the LA to defend their decision either, especially if they employ lawyers to fight their corner.

So how much does it cost council SEND departments? The simple answer is that no-one knows, exactly. Not the Department for Education, not Ofsted. And whilst LA SEN managers will know roughly how much they are spending in their own domains, the costs aren’t always that easy to uncover and pin down. This post is not only about the new tribunal figures, it's about the effort to uncover as close as possible to the real cost of Tribunal for LAs - and that's your money too, don't forget.

Adding up the cost of Tribunals

Despite the lack of spending transparency, it’s now possible to put together a robust estimate of what LAs spend on SENDIST casework – thanks in large part to research carried out by the Centre for Educational Development, Appraisal and Research (CEDAR).

And this research, when combined with this month's new SENDIST case data, indicates that English local authorities have probably used around £70 million of their combined resources to handle SENDIST appeals since the SEND reforms became law in September 2014 – appeals that they lost 88% of the time.

So how did we get to this figure?

In 2016, the Department for Education commissioned CEDAR to look into SEND dispute resolution agreements. CEDAR published their report in March 2017 – you can find it here, and we wrote an analysis of the report here.

As part of their research, CEDAR asked LAs what resources they used to process and defend SENDIST appeals – not just legal costs, but management time, specialist professional time, school staff time, admin costs and mediation services. The researchers then used this survey data to estimate LA resource costs per SENDIST case - varying from around £3,500 for a simple case, through to £11,000 for a complex case that went all the way to a hearing.

This is detailed research, but it is still an estimate. In real life, there are some LAs who won’t spend anywhere near this much on a SENDIST case, bumbling their way through an appeal with minimal effort until they either concede, or a SENDIST panel sends them packing.

On the other hand, there are LAs who will lavish much more than £11,000 on some SENDIST cases - instructing, as mentioned, external solicitors or barristers, as well as commissioning expert witnesses, and sometimes taking cases to the Upper Tribunal.

But if you use the CEDAR estimates as a guide, and if you then look at the number and type of SENDIST appeals that Tribunal processes each year, it’s possible to estimate how much resource LAs are burning through. And once you crank the numbers, it tells us that LAs have probably blown around £70 million of their collective resources on handling SENDIST casework since the SEND reforms became law in September 2014. It also tells us that LA spending has risen by nearly 40% in the course of a single academic year (see graph) 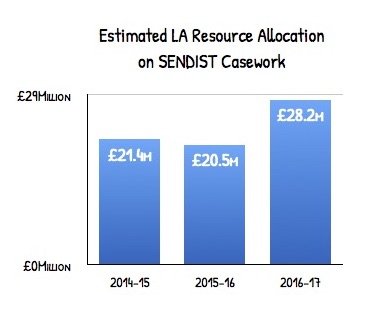 Tribunal is not value for money for LAs

£70 million is a staggering amount. Particularly when LAs tell you that there’s no money in the system, and especially when you look at the Tribunal figures and see just how few appeals LAs are actually winning – just 12% over this period.

It’s painful to consider how much SEND provision £70m could have paid for, or how better off children might have been if this £70m had been invested in better SEND administration.

A cynic would say that this approach to SENDIST is an effective demand management tool that pays for itself - regardless of who actually pays the real price. And a cynic would say that whilst SEND accountability systems fail to learn lessons from this abhorrent waste of public money and human potential, no-one is going to stop this from happening again and again, year after year.

There are well-paid people out there whose job it is to hold these cynics to account. These people need to step up and prove these cynics wrong. Just as thousands of parents do, every single year, when they appeal to SENDIST.

The statistics speak for themselves: Tania's comments & infographic.

Tania says: I made an infographic from the figures Matt pulled out. Click below to enlarge or download a PDF here. You can see from the infographic that there has been a 27% jump in appeals to the SEND First Tier Tribunal. While it is surely true that the internet, from sites like SNJ to the multitude of Facebook SEND groups, have empowered many parents to appeal instead of just accepting what they are given, they do have to have something to appeal about.

And it's easy to see that parents not only had a lot to complain about from the way LAs are operating the post-2014 SEND system, the Tribunal judges overwhelmingly agreed with them. In the past year, there has been a 54% increase in appeals against the contents of a final Education, Health and Care Plan, to a 26% jump in appeals against an LA's refusal to conduct a statutory assessment. It's clear that LAs are not only trying to shirk their responsibilities but they're also getting it horribly wrong when they do accept a plan has to be made. What a shambles!

And when parents appeal, it is clear they are not doing so frivolously. 89% of appeals to the FTT are won by parents and carers. I'll say it again: 89%. As Matt showed, that's a lot of wasted money on Tribunals and a lot of precious wasted time for a child's education.

Back to Matt with the perp walk....

The Halls of Shame & Fame

Who are the worst culprits for dragging parents to the SEND Tribunal and who's the best in show? Check out the map below (or click here to see this as an interactive version) and then see the table below