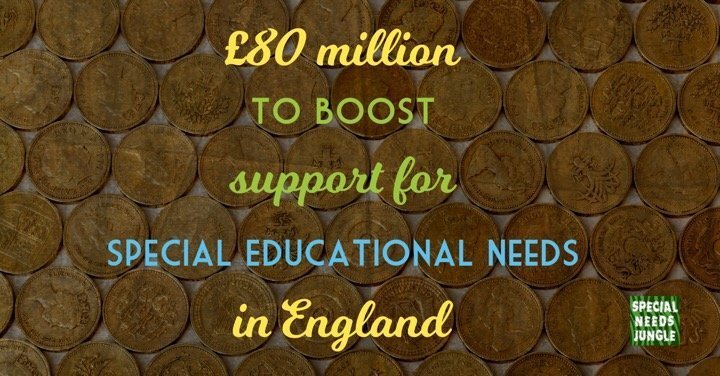 On Friday, the Department for Education (DfE) announced that £80 million was to be made available to extend opportunities to children with special educational needs and disabilities.

A multi-million pound package ensuring thousands of children with special educational needs and disability (SEND) have the same opportunities as any other child has been announced today.

In addition, the government is also pledging to fund this work for an additional year in 2017 to 2018.

What does this actually mean for parents?

We, like many, were a little confused about the spending so we contacted the DfE and asked if they could clarify a few things for us.

Some LAs are being provided with almost £1 million to help implement the additional duties.  A full list of who gets what can be found on the DfE website.  This £35.8 is an additional £4 million funding from last year.

However, it is not clear how the figure for each LA is calculated.  Kent comes top of the funding with £957,022 and the Isles of Scilly come in with just £20k.  Hopefully it is based on number of children with SEND in each LA - Kent does have a very large number - however, there is no real clarification of this.  The grant letter just states "The Minister of State determines the authorities to which grant is to be paid and the amount of grant to be paid."

What would be really useful, for families, is to see how that money is being spent by each LA.   There will be some LAs who make every penny go a mile and those who won't.

£27.3 million for The Family Fund Trust:

We asked the DfE about this as, to be honest, we had no idea the Family Fund received funding from the DfE.  We were told by the DfE that they have been funding the Family Fund Trust for something like 40 years and that this £27.3 is maintaining recent levels.

For those not familiar with the Family Fund Trust, they are a charity offering small grants to families enabling them to purchase specific equipment or short breaks for the family.  They are a great organisation. You can check their website to see if you are eligible to apply for a grant

We again, were not clear if this was additional funding so we asked.  We were told that £15m for Independent Supports is maintaining the level of funding for another year.

Some families will be happy to see the funding continue as they have found them to be useful in certain aspects of the transfer to the new system.  This was something SNJ and other parent carers advised the DfE when they met last year at a SEND reform stock taking session.

The National Development Team for Inclusion (NDTi) also released their first report on the evaluation of the Independent Supporters last week too.  You can read about the Evaluation and download the report on the NDTi site.

A few of the conclusions of the report which jumped out to us are:

So we are glad to see the funding continue.  Families need as much support as possible during the transition time and even though we know that IS is not something everyone uses or maybe it doesn't provide exactly what some families need; having it available is essential for many.

The NAS contacted us to ask if we would share their statement about the SEN funding with our readers.  We are, of course, delighted to do so.

“Today’s announcement is welcome, particularly the £35.8m that's being committed to improve local implementation of the SEN reforms.

"The new SEN system has the potential to transform the prospects of a generation of children on the autism spectrum. But poor local implementation in some areas has meant that many parents are still facing long and stressful battles trying to get the right support for their child. The funding unveiled today is recognition of this problem and should help address it.

“The Government must now closely monitor how local authorities are coping with the changes so they can make sure that every child gets the quality education they deserve.

"Autism can have a profound effect on a child but we've seen again and again how the right support at the right time can make all the difference."

We think there was some real confusion as the announcement made a few of us think this was an additional £80 million but from the figures we can see, it would seem that although it is a total of £80 million, it is in fact only an increase of £4 million from last year.  Maybe our maths are wrong.

Any additional funding is great and much needed.  However, the one thing families keep asking for is accountability.  Families are the people chasing the LA if there are delays (as the NDTi report highlights); it is families having to hold the schools, teaching staff, local authorities and health providers to account.

If it goes wrong, it is the family who has to go through the complaints system to highlight this.

The complaints system is often not very transparent or so arduous that families give up.

We would like to see funding going into a service that helps to ensure LAs, schools, health providers etc are held to account and comply with legislation without it being the responsibility of the family.

When the only right for families is to access the complaints procedure or a tribunal, often without legal representation or knowledge, is just not an even playing field is it.

If you had control of the DfE funds for a year, what would you spend the money on and why.   Be creative, if you had £80 million to spend in one year to extend opportunities to children with SEN and Disabilities, how would you spend it?  What do you think would make the biggest difference?  We would love to hear.

We will do a post on the responses we get in late February so get your thinking caps on.

See the results of this survey here