And so, we leave behind the detritus of 2016 with its never-ending celebrity deaths, seismic political upheaval and general air of doom. It was a pretty rubbish year for parents of children with SEND too.

I was so depressed by the end of it, I have contemplated chucking in the SNJ towel and never writing another post on here. My sons' EHCPs expire in July, after all. When I look online it seems so many parents have a keen grasp on the law and yet so many are coming up time and time again against intransigent LAs unwilling to pay heed to it.

Far too many parents still end up heading to the First Tier Tribunal after no assessment, no EHCP, no placement or a plan that is so shockingly badly written, it's possible it was about another child entirely.

This wasn't supposed to happen, was it, Mr Timpson? You were warned that there wasn't the training or the will to take a prescription-lite SEND Code of Practice and have LAs and schools see the light (think Saul on the road to Damascus), and create innovative systems and structures, ensuring parents are at the heart of decision making and children's outcomes were on the way to being met.

The DfE was warned it was about to go pear-shaped and warned again. Each report that came out, from Bren's, to Amy Skipp's to Lee Scott's confirmed what we all knew. We even presented them with mounds of parental evidence. But the DfE did the see/hear/speak no evil thing. Over and over again. These reports might have more impact if we rolled them all up into a cosh and bashed Mr T over the head with them. 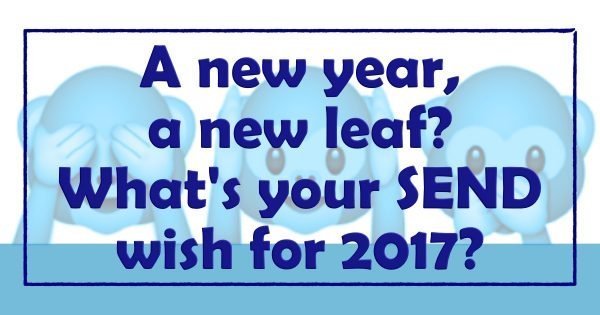 So as the smoke from 2017's fireworks fades into the night, what do we parents hope the new year brings with it? For our family, 2017 will be a momentous year, as my boys move on to higher education or perhaps a gap year for one of them, and I am left in an empty nest.

After an extra year in FE, my older son is going through auditions for drama schools/uni degrees, while my younger son already has two offers for Media/Film degrees under his belt so far. Their abilities are not in doubt. How they will cope with their ASD personalities and thinking is already keeping me up at nights. Should we move closer to where they'll be? Half-way between them? Should we just get a grip? It's such a huge step - for all of us.

I will have to speak to university Learning Support departments about adult sons, passing on now-no-longer-legal EHCPs and hope they will take notice of what they - and I - say about my boys. Because as sure as anything, my sons won't and will expect me to do it for them. Then Disabled Students' Allowance and Student Finance.

We have been through statementing, independent special school, EHCP and back into mainstream and I am so very proud of their achievements so far. What the first post of 2018 will bring (whoever writes it) is anyone's guess.

Your stories are quite different

So, I am somewhat older than many of the parents - and professionals - who read this blog looking for advice. Our journey is much further on than many, though of course, we have been where so many of you are now and come out the other side. I hope this gives some encouragement to those of you still in the depths of SEND madness.

We, in our family, are lucky that our children have had the support they needed to get this far, because I know many others - including those whose disabilities are far more severe than my boys', who have not, or whose parents have had to spend many thousands getting what should not have cost them a single penny.

What strikes me from these few wishes I have plucked out below, is that parents are not wishing for the best of everything for 2017, or even something more than anyone else. They just want the same opportunities for their children that every child without SEND has access to: A suitable education. A school place. To be listened to. Fair play. It's not to much to ask, is it?

"A smooth transfer from statement to EHCP and maybe a return to some kind of setting for my currently home-ed daughter."

"A school placement ? health, peace and happiness for all. "
"Full-time education for my eldest & a good EHCP out of the assessment process currently going on. Also that all mummies fighting their special child's corner are heard and supported."

"Wishing that our special children get the education meeting their needs and that the EHCP process gets done as per law." "Accountability and lawfulness in the world of SEND."
"Compassion. That all LAs listen to families. That we have understanding and fairness in every educational setting. That good practice is shared. That we have fewer SEND students excluded from the system. That every governing body understands their roles and responsibilities and have policies that are fit for purpose. To have robust systems in place and that every professional working alongside children believes in them ?"
"All councils use the money set aside for our special kids actually for our kids and not to fight us with. And all professionals who do not do the job they are paid to do are held accountable."

And so, what do you wish for? Leave your hopes and wishes for 2017 in the comments. And a Happy New Year from my family to yours.