We've recently featured some posts from Kathryn Rudd OBE, Principal of the National Star College and Chair of Natspec regarding the choices available for 16+ further education for young people with learning difficulties/disabilities.
A year ago students with disabilities and learning difficulties started their campaign ‘Right not a Fight’ to voice their concerns about being blocked from accessing the colleges of their choice. One year later and the situation is even worse – young people and their families are not receiving the right information and are enduring a revolving door of assessments, reviews and appeals.
This continual fight is simply too much for some families and they give up and accept options which aren’t right for their son or daughter; for others it means months of fighting the system, lengthy battles with a range of professionals and great stress for all of the family. It is also wasting significant amounts of public money. Young people with disabilities ask you to join with them to ask for the same rights as their peers without disabilities

This Thursday, 18th June, the campaign is taking to the streets to highlight their “A Right not a Fight” campaign. Kathryn Rudd is back to tell us more: 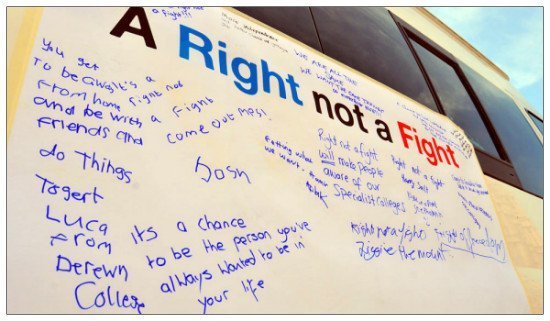 Too much to ask?

A student with disabilities told me last week that he and his family felt like “guinea pigs”.

They are being asked to try out new things, accept untested new provision, cope with a postcode lottery of access and, as his family put it, “spend hours on our exercise wheels filling out endless forms.”

Many families cannot face the ongoing battle. For others it becomes the focus of family life – fighting the system at the expense of everything else.

Young people with learning difficulties and disabilities from across The Association of National Specialist Colleges are angry at the treatment they and their families are facing. Last year we were told the new legislation would improve things but has it?

Shouldn’t the best match of young person to the right provision be, “A Right not a Fight”?

Shouldn’t young people and their families have the right information so they can make informed choices?

Shouldn’t gaining the right support to achieve your goals be a good thing rather than an unreasonable expectation?

Apparently for young people with learning difficulties and disabilities all of these things are “too much to ask”.

That’s why we are supporting our students and their peers with disabilities from across the UK in their “A Right not a Fight” campaign.

On June 18th from 11.30 – 2.00 p.m. at Old Palace Yard opposite Westminster students will be coming together to protest at the inequality they face.

The system means that young adults with disabilities are treated differently from their peers without disabilities. If you don’t have a disability and want to go to college the process is simple. You find out about the college and you apply. You have an assessment and if you are successful you attend. That’s it.

This often means a lot of time is spent proving why you can’t fit into provision. You may also be having meetings about your Education, Health and Care plan – generally this will be with people you don’t know and you will have to explain things. You then have to hope that the outcomes identified in the plan match your needs and requirements and name the college you want to go to.

Then you have to start the battle to get funding. If at any stage during this process somebody says no, you have to appeal and then the whole cycle begins again.

Social media is littered with the same stories – of young people and their families stuck in a loop of assessments and funding battles. One parent told us that her son had had 22 different assessments in 11 months.

Another said he was gearing up for the second “attack” – and the first stage had taken nine months.

One parent added up the amount of different people that her daughter had had to see to get her place and funding agreed. It took 27 different professionals. Many they had met for the first time when trying to put the EHCP together. The majority of professionals only attended for one meeting – for other meetings there were no representatives from the agencies supporting.

The cost to the young people and their families is huge and the cost to the public purse cannot be overestimated. In this age of financial austerity this is money which could far better be spent on supporting the young person to achieve their goals.

In a recent survey commissioned by National Star College, parents highlighted their fears about the new system. A huge majority of parents – 87% – have no idea how Local Authorities make decisions about their child’s future. They don’t know how the system works, who is doing what, what information they need and how to get help.

Families must uproot their lives as they are being stopped from accessing provision “out of county”. Regardless of whether it is the best, most cost-effective programme for a young person.

One parent said: “We are moving out of the county to where there will be much better provision for autistic teenagers. There is nothing here and I have had great fears for my son’s future.”

Having the right information, access and support should not be “too much to ask”?

Please join young people with disabilities and their supporters on the 18th June (between 11.30 – 2.00 p.m outside Westminster) and ensure their voices are heard.