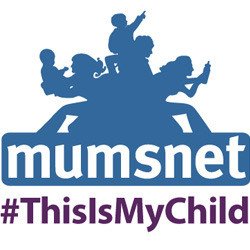 As you know, Special Needs Jungle is delighted to be involved with the MumsNet #ThisIsMyChild campaign, reviewing its inaugural blog hop and if you blog (and if not, why not?) I do hope you will write your story and add it to the link.

The idea of the campaign is to raise awareness of what lies behind the child having a melt-down in the supermarket or having a screaming fit at the playground.  To those who've seen this, as MumsNet says, "Did it make you go a bit… judgypants? Did you think 'well, that child could do with a firm hand'? Or did you think that there might be more to the situation?"

It's happened to me, as I wrote some time ago in my Sidelong glances post and if you're a parent of a child with SEN/Disability, 10 to 1 it's happened to you too.

Now, no one's perfect, let's face it - I know I'm far from it. But if sharing your story can help make just one person pause before hoiking up those "judgypants", it might be something you want to consider having a go at. If you don't have a blog but have thought about it, this might be the opportunity you were waiting for. If so, Don't forget to join MumsNetBloggers so you can enter the linky.

I'm roping Debs in to read all the linky blogs - two sets of eyes are better than one, after all - and will do a review of the ones that made the biggest impression in a week or so. We'll be tweeting as many of them as possible too and adding some to our Facebook page, using the #ThisIsMyChild hashtag to help you find them.

Although we are lucky in that we special needs parents support each other via our blogs, Facebook, Twitter and online communities - for example, I'm a volunteer moderator at RareConnect for Son2 and my Ehlers Danlos Syndrome - it would be good if we felt more supported by the general public as well.

#Thisismychild is a great campaign and with the power of MumsNet behind it, it's already getting lots of media coverage. Our Debs was speaking about it yesterday on Radio Kent (after 63 mins, for a limited time)

What are you waiting for?

Click here to enter your link and view this Linky Tools list...Powered by Linky Tools