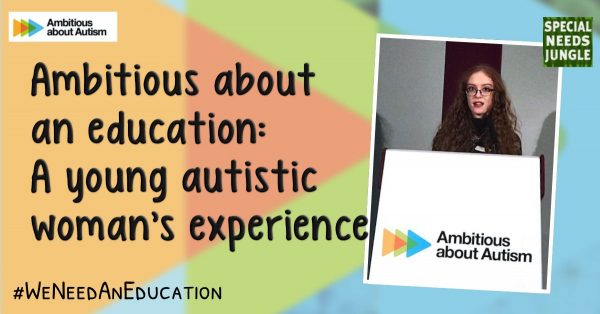 Recently, I took part in an Ambitious About Autism panel debate about the difficulties faced by young autistic people to get the right educational support to reach their potential. It was part of their #weneedaneducation campaign and I was delighted to support it.

Data uncovered by Ambitious about Autism earlier this year revealed that exclusions of autistic pupils have increased by almost 60% in five years. Yet only 55% of students with an autism diagnosis also have an Education, Health and Care Plan or EHCP. Exclusions of young people with SEND is being looked at the moment in a review led by former Minister, Ed Timpson.  The #weneedaneducation event featured some of the experiences of Ambitious About Autism's Youth Patrons at school.

The event started with speeches by a number of young people who spoke movingly and eloquently about their journeys through education. One of them, Georgia Ellin, an Ambitious About Autism Youth Patron also joined me on the later panel along with HMI Ofsted SEND specialist advisor, Jonathan Jones, among others. I was also pleased that my youngest, Gio, 19,  came with me to meet them, as I hope they will get involved too at some point.

What particularly stood out for me was the fact that over three-quarters of young people said they had experienced bullying. When giving more details about their experiences, young people told us that autism seemed to make them a particular target for bullying behaviour. For example, some young people – including myself - have experienced situations where bullies deliberately provoke them into having meltdowns. In these horrible situations, it’s crucial that teachers understand what has triggered autistic students’ behaviour and deal directly with those who are responsible, rather than expecting the autistic student to in some way change their behaviour. Georgia Ellin

Today, I'm really pleased to bring you a young person's perspective. Lucy Portway, who is autistic, is here to tell you more about the event...

We Need An Education: My experiences at school

My name is Lucy, I’m 17 years old and from Essex, and I’m a youth patron at Ambitious about Autism.

I was diagnosed with autism aged 15 during my GCSEs. I really like art, music, animals and having fun with my friends, although social situations and maintaining relationships can be very hard for me.  When I was diagnosed with autism, I felt relief that there was an answer to the troubles I had been experiencing. It provided me with a way to relate to others and explain how I feel. This was quite difficult without a diagnosis and I struggled a lot.

Recently, myself and other youth patrons for Ambitious About Autism hosted a debate in London’s Clothworker’s Hall as part of our We Need An Education campaign  to raise awareness and try to improve the education system for people with autism. According to new research from Ambitious About Autism, 40% of parents who have a child with an Education, Health and Care plan (EHC) said they had waited over 18 months for an assessment and 56% of families said that their child had been unlawfully sent home from school or denied an education.

I personally relate greatly with the campaign as growing up as an autistic pupil, I faced lots of trouble with my education. In fact these problems led to mental health issues I still deal with today. By the time I was in year 8 I was having panic attacks before every lesson, especially German as these classes were so unstructured and the teacher randomly picked on students to answer questions.

Over the years, I developed anxiety, depression, psychosis and borderline personality disorder. I put much of the blame for this on how little support and care my school gave me. Regardless of whether or not I had autism, I should have been treated better. When my school finally found out about my diagnosis, they simply didn’t believe me.

Grammar schools can be very competitive and I found real friendships are difficult to come by. I experienced toxic relationships, and as I find friendships difficult anyway, this only added to the pressure. I felt isolated, even more so by how the teachers treated me. One time I had a panic attack in class as we were made to do a presentation. I was told by my head of year “don’t have panic attacks, it’s not fair on the class”. Other times I was sent out the class and left alone or with a classmate who didn’t have a clue how to help. At around 15 years old I had a severe breakdown at school and felt very depressed and suicidal. I was sent to hospital and luckily recovered quite soon, but after that, even though I was well enough to go to school, I was told not to bother coming back in. This isolation led me to feel unsafe at school, and I wasn’t able to attend some lessons. I ended up hiding in the toilets, breaking down and sometimes harming myself. In the end, I managed to get therapy after a long, long wait, from where I was diagnosed.

Unfortunately, this kind of thing is happening to thousands of autistic pupils around the country. It has to stop. There needs to be more acknowledgement and support given to young autistic pupils, especially if they are diagnosed later on in their lives. If I had had just one teacher who I could have gone to for support, someone who could have told me it would be okay, and not just assumed there is something “wrong” with me, then I believe I wouldn’t have experienced all the trauma that I am dealing with and will deal with for the rest of my life.

Just a final word from me about how Ambitious about Autism managed to hold a busy event full of people on the spectrum without sparking mass anxiety. I'm sure they won't mind me sharing just some of the adjustments they used and you will see it's not expensive, it just takes thought and the will to be inclusive.