This is a post you need to read and share if you have children who are online, whether they have SEN or not.

It's about Anti-Bullying Week and while this post isn't specifically about special needs, children and young people with disabilities are often targeted for bullying abuse. However, the anonymity of the so-called 'social' internet has bred an insidious form of bullying that follows its victims right into their homes. 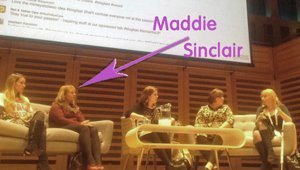 Maddie is waging war on bullies in the wake of the unthinkable death of a teenage family friend who felt so traumatised at being a victim of bullying that she committed suicide.

Anti-Bullying Week 2013: The Future is Ours. Safe, Fun and Connected

Last week at Mumsnet BlogFest, serendipity intervened and I unexpectedly ended up speaking about our anti-bullying campaign as part of a panel session called ‘Shaping the debate: how blogging and social media can change our world’ with the really rather wonderful Tania. (Editor's note: How kind!)

This week is Anti-Bullying Week (18th–22nd November) and Tania asked me to write about our campaign. I know bullying can be a big problem for SEN kids too, so a huge thanks to Tania and Debs for letting me share this very important story.

It’s a heartbreaking one. On Tuesday 17th September this year, our dear family friend, a 14-year-old schoolgirl from Devon called Izzy Dix, took her own life. It seemed to be linked to bullying, at school, both in the community and online.

Izzy was an amazing young lady. The first thing that struck you when you met her was how bright she was. Not just in intelligence, but in demeanour too–she was always smiling, she was very thoughtful and caring, and had a keen interest in the world around her.

I know that Izzy had been bullied. I know this because she had discussed it in depth on an ongoing basis with her mum, Gabbi. I also know this because Izzy had written a poem about the bullying two months before she died called ‘I Give Up’. 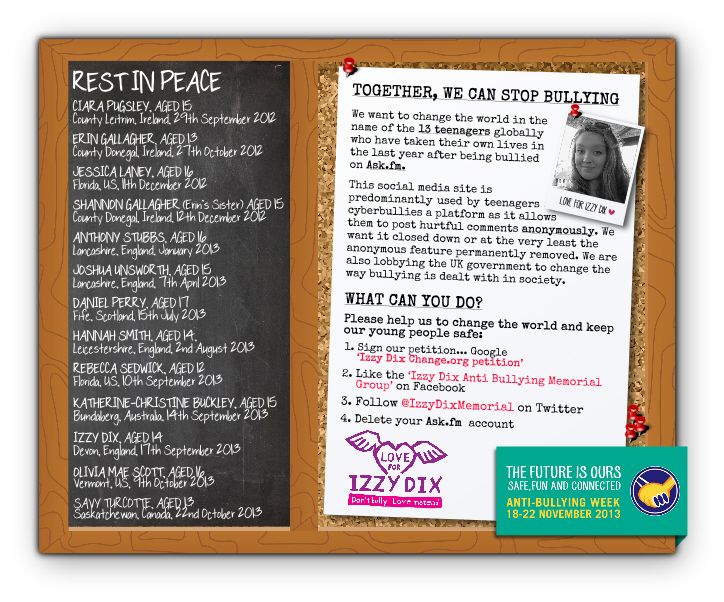 A gifted student, Izzy wrote it after being publicly rejected by a group of girls who had invited her to a local music festival. She wrote it on her phone on the way home from the event, which she left early because of the bullying she endured. She went straight home to her mum, who spent several hours consoling and supporting her. Izzy’s poem is uncomfortable to read because it shows, in her own poignant words, the damage bullying can cause.

Like many teens these days, Izzy had no respite from the bullying, as she also suffered abuse online. She was particularly troubled by a social media website called Ask.fm. (Ed's note: No  link on purpose)

If you haven’t heard of this before, it’s a Latvian-based question and answer site with over 70 million registered users worldwide, the majority of whom are teenagers. It allows anyone to post anonymous questions and comments on another person’s profile and is increasingly being used to communicate abusive and sexualised content. It’s this anonymity and lack of accountability and traceability that makes it really dangerous. In the last year, Ask.fm has been linked to the suicides of 13 young people after they were bullied on there.

Gabbi is a single mum, and Izzy was her only child. Because of this, they had one of the closest, strongest and most natural mother/daughter bonds I’ve ever witnessed. Gabbi and Izzy discussed the bullying openly and they came up with strategies together to try to deal with what was happening. Gabbi had made the school aware of the situation on many occasions, but nothing satisfactory had been done.

Gabbi and Izzy deleted Izzy’s Ask.fm account together. Izzy undertook voluntary work for a youth charity in an attempt to meet new people; she joined Sea Scouts so she could socialise with other teens outside of her school environment; and she spoke to her school counsellor. But it seems the damage had already been done.

It’s now been two months since Izzy took her own life. Reality has set in for all those who knew her that she isn’t coming back. But a lot has happened in the last two months too. With Gabbi’s support, we’ve set up an anti-bullying campaign in Izzy’s name and are lobbying the government for real change to the way bullying is dealt with in society.

We’ve launched a petition calling for the closure of Ask.fm, or at the very least, the permanent removal of the ability to remain anonymous on there, as this is the aspect which is causing the most damage to our young people.

On top of that, we want the government to bring in new regulations that will keep people, and young people in particular, safe on the Internet.

As a parent you need to know the following:

Speaking openly with your children has never been so important. Where appropriate, explain to them what bullying is, why it happens, and how they can report it.

Tell them that you love them. Not once, but several times a day. Because love is the only real long-term solution to bullying. Love has the power to protect those being bullied. And love can also stop bullies bullying in the first place.

If you’ve been moved by Izzy’s story, there are 4 things you can do to help:

The slogan for this year’s Anti-Bullying Week is ‘The Future is Ours. Safe, Fun and Connected’. It breaks my heart that we couldn’t make this happen for Izzy.

Please make this a reality for others like her. We need your help before it’s too late for them too.

Maddie Sinclair is a mum of 4 year old boy, Gammon, and 2 year old girl, Chips, and blogs about life with them at Gammon & Chips.

Ed's note: If anyone should happen upon this page and decide to write something other than supportive, don't expect it to be approved. Just sayin'