The answer is clearly 'yes' for all sorts of reasons, especially when the condition is a rare one, as it can lead to improving levels of diagnosis, access to funding, research and medical professionals' knowledge.

Today is the annual Autism Awareness Day, part of an awareness month. Probably because of days like this many more children have been diagnosed with an autism spectrum condition, including my own. There must be very few people in the country who haven't heard of autism.

So why an Awareness Day? Autism isn't rare, it has research taking place into it the world over, there are many medical specialists and so much is written about it, so it's not just through a lack of awareness that parents often still face incredibly tough battles getting access to treatment options and education.

It's clear that being 'aware' isn't enough. What's also needed is more tolerance, training and understanding of the condition and the lives of those families affected.

, right? Or that kid from The Curious Incident of the Dog in the Night-time

? Raising awareness of autism is now as much about fighting media stereotypes as telling people what it is in the first place. 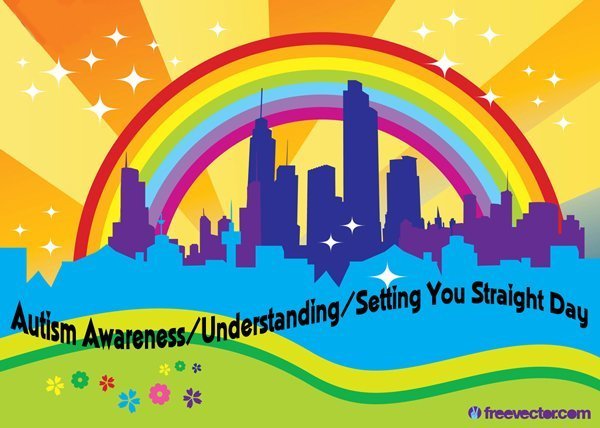 The problem with autism is precisely that is is a spectrum condition, and every child is different. Like they say, meet one child with autism and you've met one child with autism. However, the new US "DSM 5" Mental health diagnostic manual that came out last year has made the crusade for public understanding more difficult, after it ditched the term Asperger's and other distinct points on the spectrum that made a child's behaviour easier to 'peg'.

It's almost as if those learned medical types on the American Psychiatric Association, decided, in their infinite 'wisdom' (and this is slightly ironic given the subject matter) to wipe out official distinctions in the DSM5 without considering the millions of parents who found the terms really quite useful. Not to mention the people with autism who were quite happy to identify themselves as, for example 'an Aspie'.

Lumping such a large range of behaviours under one term of 'Autism Spectrum Disorder" makes it more difficult for 'ordinary' people to understand what exactly is meant by 'autism". So when you say, "My child has autism", it could actually mean anything from non-verbal and unable to be left alone at all to (allegedly) Bill Gates.

Added to this, you'll always get some smart-arse (maybe even a medical or education professional!) who saw it on the news, saying, "But Asperger's doesn't exist anymore, does it...". Oh, right then, thanks for that, my child has been magically cured by a simple change in terminology. Wowzer! Let's call cancer or another killer disease something else and fix that too...

Of course autism and Asperger's are not deadly in themselves, though far too many (one is too many) young people with an ASD have done themselves in, unable to live with being an outsider, rejected by peers or the world in general for their lack of social understanding. Even if they're high-functioning and have made it as far as university or the workplace (ha!), being away from home for the first time without their usual support system can have a catastrophic impact on their ability to cope with the world.

Autism Spectrum conditions are also often made more difficult to diagnose, treat and to live with, because they're sometimes accompanied by 'co-morbidities' for example, ADD, ADHD, Pathological Demand Avoidance (this is itself being accepted in the UK as being on the spectrum), Oppositional Defiance Disorder and so on, as well as any number of genetic conditions from Down's Syndrome to Ehlers Danlos Syndrome.

So, autism awareness/understanding raising days are quite a big job already and DSM5 has the potential to make them even harder if it's so easy to change the goalposts on a condition. If you are diagnosed with a physical disease, then you have that disease. No one's going to come along and say, well you did have it, but now you don't because we've changed the symptoms. Unless you've been cured, which doesn't happen in autism.

The Center for Disease Control and Prevention (CDC) in the US has already published a study (Jan '14) showing that diagnosis rates are likely to be lower under DSM5. And we all know that a diagnosis is the key to support resources.

But the key to this for those here in the UK, is that DSM5 is an American diagnostic manual and, while influential, doesn't affect diagnoses either existing or future, in this country even if it has already affected attitudes. The main set of criteria used in the UK is the World Health Organisation’s International Classification of Diseases (ICD). This is set to be updated next year (2015). If your GP, school or anyone tries to tell you differently, you might want to point them to this page on the National Autistic Society's website which makes things clear enough.

In any case, back in the real world we still use the term Asperger's as much as we ever did and I'm sure people in the US do too. If my child behaves differently from the norm (as usual) and I feel the need to explain so they don't just think he's badly behaved, I simply say quietly, "My son has Asperger's", or if he's being particularly 'unusual' I'll use 'autism' instead. Even if the other person doesn't understand what it really means, they tend to nod understandingly as if they do and shut up.  A diagnosis does that. Unless it's ADHD, then you're judged anyway as a bad parent for some reason (for 'some reason' read the Daily Mail has trashed ADHD so much half the population don't believe it is a real diagnosis)

So this year, we have extra work to do to set aside misinformation as much as encourage better knowledge and understanding of what a 'spectrum' really means.  As if looking after our children wasn't enough...

[Sharing note: if you experience problems with the Facebook share button below today, please use the one behind the green share services button on the end instead.]