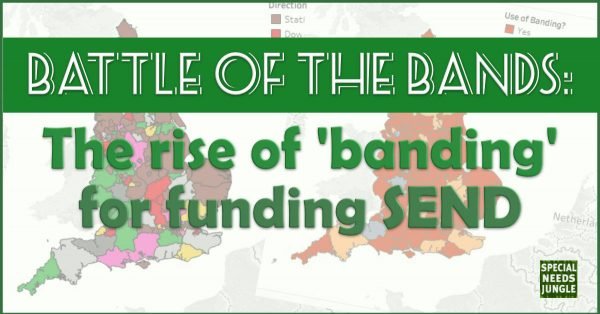 Is your child getting an EHCP? Have you talked to your school about SEND support recently? Has your LA tried to interest you in one of its awkwardly-named “My Plans”? If so, then there’s a very good chance that you’ll have come across people talking about ‘banding.’

If no-one’s explained to you what banding is, how it’s done, why it matters, when it matters – and why it shouldn’t matter at all – then read on….

Banding refers to a policy that a local authority (LA) has put together to dish out “top-up” resources for SEND from its education funding pots – normally from the pot known as the High Needs Block.

SEND funding is ridiculously complex – if you have a taste for serious pain, then read this, but there’s also a slightly easier-to-digest explanation from IPSEA too.

Three ‘elements’ make up SEND funding in mainstream. In theory, the first two ‘elements’ are supposed to be enough to meet most pupils’ special educational needs - although many head teachers, SENCos and school business managers would beg to differ.  If the school needs more resources than this, then they can request a third element – a ‘top-up’ - from the LA’s High Needs Block.

This ‘top-up’ funding isn’t just for children who have an EHCP – schools can also apply for it for pupils on SEN Support.

I’ve simplified things a lot, because I don’t want to make people lose the will to live - but it’s the ‘top-up’ third element that matters most when you look at banding.

The LA then has to work out how it’s going to allocate its ‘top-up’ funding, usually consulting a local ‘schools forum’ in the process. And this is where the banding comes in.

How do the LAs work out the criteria?

Well, this is SEND, so there is no national standard - most LAs have their own in-house recipes.

Some LAs use a crude system based on teaching assistant hours. Others use more complicated points-based systems that work through a list of factors specific to the type of SEND in question. Other LAs deploy web-based matrix systems that are almost entirely opaque in operation and execution.

Either way, there’s a very good chance that your local authority uses banding in some shape or form. Last month, I asked LAs whether they use banding: nine out of ten who answered said they did. You can see from the maps below if your LA is one of them.

Click here to see an interactive version of the map above

Click here to see an interactive version of this

Strictly speaking, no. LAs are not acting unlawfully just by putting banding information in an EHCP. But it’s irrelevant for the strict legal purpose of the Plan. Check this blog from legal firm Boyes Turner for more. It would be just as lawful – and just as pointless - to shove Klingon poetry into the EHCP too.

Where things start to get dodgy though is when LAs decide to put banding information into an EHCP instead of specific detail on SEND provision.

The 2015 SEND Code of Practice, paragraph 9.69 clearly says that “provision must be detailed and specific, and should normally be quantified.” Putting a band (or a sum of money that the band attracts) in Section F of an EHCP isn’t going to be enough by itself.

If an LA tries to argue that it doesn’t need to detail, specify and (where appropriate) quantify SEND provision in Section F of an EHCP because they’ve put banding & funding detail there, then the LA is mistaken. Or more probably, after six years & over £500m spent on SEND reform implementation, the LA is lying. Either way, it’s a myth – a myth that SEND advocates are trying to slay.

From the LA point of view, yes – it simplifies and streamlines the task of parcelling out scarce ‘top-up’ funding. It’s also worth reading this blog from SEND research specialist Rob Webster, suggesting that intelligently-applied, banding could have some potential benefits for flexibility and quality of provision.

But from the point of view of the family, there are reasons why relying on banded funding alone might be a bad idea.

The main issue is this: the banding values, and the banding itself, are just policies. What happens if the LA changes the policies?

That sounds like it might be a real problem. But is it? After all, LAs might move the banding upwards as well as downwards. How many LAs are actually fiddling around with their banding, and who benefits & loses if they do?

It seemed like something worth investigating. So I asked 150 LAs whether they used banding – and if so, what changes they had made to banding over the last few years. Here’s what they said:

Want to know the picture in your LA? See the map below for a guide.

That might sound like a reasonably balanced picture: most bands static, a few up, a few down, but generally speaking, business as usual. Well, that’s not how it’s working out in reality – because the costs of keeping SEND provision going have gone up a fair bit over the last few years.

There’s obvious stuff, like the cost of equipment going up – but there’s less obvious stuff going on under the bonnet too. Even though staff wages haven’t gone up by much, teachers & support staff now cost more to employ than they did a few years ago.

All this has an impact on SEND costs – and what it means is that just keeping the bands steady over the years actually amounts to a real-terms cut.

But some band values are on the rise in a few LAs, right? That’s true, and it’s better than nothing – but in most cases, the rises just aren’t enough to cover the extra costs that have built up. The SEND professionals I spoke to when researching this piece reckoned that their costs have gone up by around 5-10% over the last three years, dependent on setting.

Going back to our 129 LAs, how many of them have bumped up the value of all their ‘top-up’ bands by enough to reflect the rise in costs over recent years?

In at least 125 other LAs, some, most, or all schools receiving banded ‘top-up’ provision are essentially having to deliver the same support with less real-terms funding.

And even with the best will in the world, if it takes funding to make your child’s SEND provision work well, then there’s going to be an impact if your child’s provision is simply listed as a banded sum of money. It’s likely to mean that their staff will be stretched more thinly. It’s likely to mean that they won’t be able to procure as much specialist kit and expertise to support learning.

Money isn’t everything – check this blog from a SEND parent for a great example of the difference that an inclusive culture can make.

But in many cases, money matters – and this is where a proper EHCP counts. An EHCP alone isn’t going to safeguard your child from these pressures unless its provision is detailed, specified and quantified where it needs to be quantified.

Some LAs have enthusiastically hawked non-statutory “My Plan” documents as a quick, flexible and cheap way of getting support in place. They’re flexible for a reason, and that reason isn’t always good for the child. If the LA drops the banding values that support these plans, there’s virtually no statutory protection.

What’s coming down the tracks?

It’s slightly soul-sapping going through SEND finance stuff – I haven’t even touched on several other major SEND cost pressures that schools are facing. If you’ve got an appetite for this stuff (and God help you if you have), then you can find an excellent short guide to these problems here from special school stalwart Jarlath O’Brien.

The outlook for SEN funding is bleak. LAs will tell you that SEND money is tight. It’s entirely right to query what they do with this funding and how effectively they deploy it – but they aren’t always lying about the basic resource problem. The High Needs Block is where banded top-up funding comes from - and in most LAs, this Block is already at meltdown, or close to it.

Banding isn’t going away any time soon – and you can expect to see LAs using it more and more as a means of curbing high-needs spending. One London LA plans to cut high-needs top-up spending by 5% ; it’s also looking to reshape its banding system, and that’s no coincidence. Other LAs have abruptly pulled the rug on existing high-needs funding arrangements, and several other LAs told me they planned to rejig their banding structure in the coming months. You can find some ominous-looking examples coming together here and here.

Parents and schools will need to watch very carefully how these plans shape up. But in the meantime, relying on banding alone is a mug’s game.