I was going to start this piece with "As the dust settles after the #Brexit vote...",  but every day the dust seems to get more dense and choking as the enormity of what less than 50% of the British electorate has decided for everyone else, sinks in.

It seems like, since last Friday's shock result, many people are only now really considering what the implications will be for different industries and sectors. The answer, quite often is, 'it's too early so say'. So unlike the certainty of the #Brexit campaigners before the referendum...

I believe those in the remain camp failed to get over to people what leaving would actually mean for different sections of the population, especially those who don't realise that they do actually benefit from EU membership, without actually realising it (And I still cannot quite believe that the nastiness, racism and ugly behaviour of the Brexit campaigners did not turn off voters completely - or what this says about our nation). 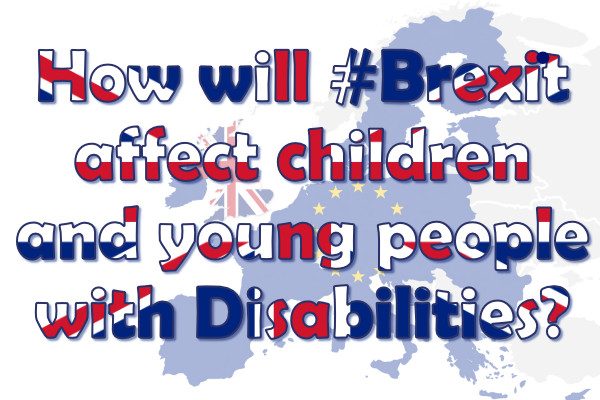 What's the impact on children & young people with disabilities and their families?

I've asked some of our expert columnists what they think a post-EU United Kingdom will look like for children, young people and their families. Will there be any change and if so, what is it likely to be?

Our SENCo, @AspieDeLaZouch thinks there are too many variables to say for certain at this stage"

Nobody knows because it depends on whether:

I've checked and it doesn't have any immediate impact on council services or duties in education or care. So the issue is whether the economy tanks in which case those with higher bills (e.g parents/carers of children with disabilities) will suffer.

What will happen to health and research funding?

Nigel Farage has already admitted he make a "mistake" in his claim that the NHS would benefit from an injection of £350 million. But what impact on health will leaving the EU have on our collaborations and on EU funding opportunities?

The UK Science industry had been in the remain camp, as in recent years they have been net gainers in EU funding streams. Genetic Alliance UK, the national charity of which I am a Trustee, represents around 180 genetic and rare disease patient groups. Well before the referendum, we voiced support for remaining in the European Union.

Genetic Alliance UK receives a significant portion of funding from European Union initiatives, as do many UK researchers operating in the rare disease field.  The UK is also well represented on the Expert Group on Rare Diseases, which advises the EC on issues relating to rare diseases and leaving will most likely mean we forfeit our place, and influence. In addition, the UK currently benefits from regulation such as that on data sharing, clinical trials and medicines.

Baroness Tanni Grey-Thompson, Lords peer and former Paralympian spoke out against Brexit, saying that "leaving the EU would prevent British people with disabilities from benefiting from upcoming legislation on accessibility".

She's referring to the proposed EU European Accessibility Act, with the hope of setting requirements for certain key products and services. These include cash machines, banking services and TV equipment and Baroness Grey-Thompson is concerned this will now mean Britons will miss out. Of course it's entirely possible we could have our own rules on this but being able to influence laws that would apply across the continent for disabled people travelling there would end (guess what, some of us do travel - and with our disabled children!).

Our columnist, Mr Boosmum, whose own blog, Premmeditations talks about bringing up a child with cerebral palsy and epilepsy has offered her view on what Brexit may mean for her family.

Many of my friends' children rely on medicine unlicensed in the UK and imported from Europe. They rely daily on an already strained NHS and a broken Social Care system that Farage and others have been clear will not fare better outside the EU.

These children's lives, horribly difficult though austerity has made them in the last few years, have at least until now had their rights protected and promoted by EU legislation to which their parents have had frequent recourse.

The pragmatic view on Brexit - from columnist, Bren Prendergast

Our newest columnist, Bren Prendergast (whose next column will be on Access Arrangements for exams) likens Brexit to the some legislation closer to home - but agrees that it's our children with rare conditions who are likely to feel withdrawing from the EU the most.

I suppose my view on Brexit is a pragmatic one, we have what we have and now we have to work with it, like the Children & Families Act. While it is far from a forgone conclusion that we will actually leave the EU, what is in the here & now is the devaluation of the pound and the very real possibility of a recession. Those already struggling to keep their heads above water, and struggling to get the provisions that their children need, are likely to be in for a very bumpy ride. As we already know with 'austerity' measures, it is the most vulnerable that are the most exposed to cuts.

Schools & colleges need to lead the way, they need to support and model egalitarian principles, not only for kids with SEND, but for kids too. Families can be too proud to claim free school meals and ask for assistance with funding trips. Schools need to consider what funds they are asking parents to contribute to and adjust venues/arrange breakfast clubs to accommodate all. Children and young people with SEND may also be immigrants - a double whammy for them.

In essence, I'm promoting the philosophy of Reggio Emilia approach  and extending it into secondary and Further Education. Schools & colleges must do what they can to both cushion its children and young people from the effects of further austerity and promote & model good human values.

More impact is likely to be felt by children who have a rare condition. Many research projects rely on EU funds to work on discovering the genetics, causes and potential treatments for conditions which few people in any one country have but when you look further across Europe and to the wider world

Your views on #Brexit and its effect on children with disabilities?

What are your views? Did you vote out and feel children and families will benefit from being outside the European Union, or did you vote remain and are fearful about the future? Or, did you not bother to vote and are now regretting it? Tell us in the comments.