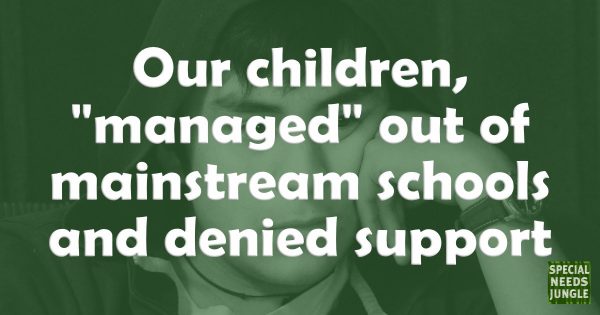 In just 11 astonishing days, the denial of young people’s rights to education, health and care in England has been completely exposed. Evidence of young people being hidden away from their communities, removed from the mainstream, refused the support to which they are entitled and ultimately placed in serious danger has been building and has now burst into the open.

Last Tuesday we covered in some detail the DfE survey showing that parents of children with SEND were twice as likely as other parents to have complained and moved their child to another school. The figures included:

On Thursday, the Department of Health published a review led by Dame Christine Lenehan, Director of the Council for Disabled Children, triggered by concern about the care, support and treatment provided to the group of children and young people with complex needs (and behaviour that challenges) involving mental health problems and learning disabilities and/ or autism. It followed several high profile cases, including the utterly preventable death of Connor Sparrowhawk, who drowned in a bath at an Assessment & Treatment Unit managed by Southern Health Trust.

Speaking of similar reviews in 1997 and 2004, Dame Christine says, “We didn’t get it right then. We haven’t got it right now.” She describes some in-patient units for young people with mental health needs and disabilities as, “a place of last resort” used for, “warehousing, they act as the long stay hospitals that I thought we had left behind.”

Additional factors contributing to the needs of these young people are identified as:

Send in your evidence

But it’s not as if these needs were unknown, as Dame Christine said, “This is not a group of children and young people that is ignored by Government programmes and priorities. The challenge is that everybody’s business becomes no-one’s priority. These children need to become our children.”

Dame Christine is seeking evidence to inform her review into the experiences and outcomes of children and young people in residential special schools and colleges (including non-maintained and independent special schools). She would like to receive evidence about:

You can submit your evidence to Dame Christine Lenehan here.

But it gets worse... yes, it's possible

In the same week I was contacted by Martin Vickers MP who confirmed to me that the Department for Education is preparing a consultation on the admission to mainstream schools of children and young people with autism. This follows his meeting with Ed Timpson, the Minister for Vulnerable Children and Families.

And then, the bombshell:

Yesterday afternoon, the research group Education Datalab unleashed a shocking report showing how pupils have been pushed out of mainstream schools under the nose of the DfE, especially pupils with SEND and especially from ‘sponsored’ Academies (those which joined a Multi-Academy Trust).

The researcher, Philip Nye, used the DfE’s own data to find out what happens to those children (mentioned in the pupil survey above) with low attainment who are ‘managed out’ of their mainstream school because they are likely to lower the school’s performance rating. This is what Nye found:

This is what we have been saying all along: In fact, when Professor of Critical Disability Studies & Psychology at Manchester Metropolitan University, Katherine Runswick-Cole, and I met with Sean Harford, Ofsted’s National Director of Schools, back in January 2015, this is exactly what we told him.

It’s what parents tell us all the time: certain types of school are very effective at pushing out children with special needs, without even going through the exclusion process. They don’t want them, they don’t help them, and – as Nye’s report, “Who’s Left?”, demonstrates – they don’t keep them.

Yet, as Christine Lenehan says, these are our children. And these are tomorrow's adults. We need to think carefully about that.