The Duchess of Cambridge yesterday spoke of her and her and Prince William's belief that early intervention is imperative if we are to prevent mental health difficulties continuing into adult life and, with the cost upward of £105 billion in public spending for adult services, the earlier the intervention, the better for all concerned.

Lucy Russell, Campaigns Director of Young Minds has said the country is sitting on a mental health time-bomb and, as the last review of Children's mental health provision was in 2004, there is little doubt why there is an urgent need for a 'good enough' mental health service, especially with huge pressures of target-driven education, cyber-bullying, sexting infiltrating in to our young peoples lives as well now!

CAMHS – The main source of ‘support’

For many of us hearing, ‘I’m referring your child to CAMHS' (Child and Adolescent Mental Health Service) can send you cold, the hairs stand up on your neck and your face pales, particularly if you have had previous experience of the service.

Maybe it’s your first referral and you don’t know what to expect for you and your child so you see this as a potential lifeline and go to the appointment full of hope that finally someone is listening to you and that help is just around the corner.

Perhaps you’ve heard stories about CAMHS but don’t know what they are about, what they are supposed to do or how they can help This link may help: NHS Choices Childrens Mental Health Services Explained

As there is little option other than to be referred to CAMHS via your GP, it’s not surprising then as a parent, you put a lot of expectation into the initial appointment. Why shouldn’t you? Look at a CAMHS website and it can be like looking like the answer to all your prayers. They tell you of services that are available for a variety of different disorders and needs and give hope in a hopeless situation. Come to us and we'll help! Your child is safe in our expert hands! 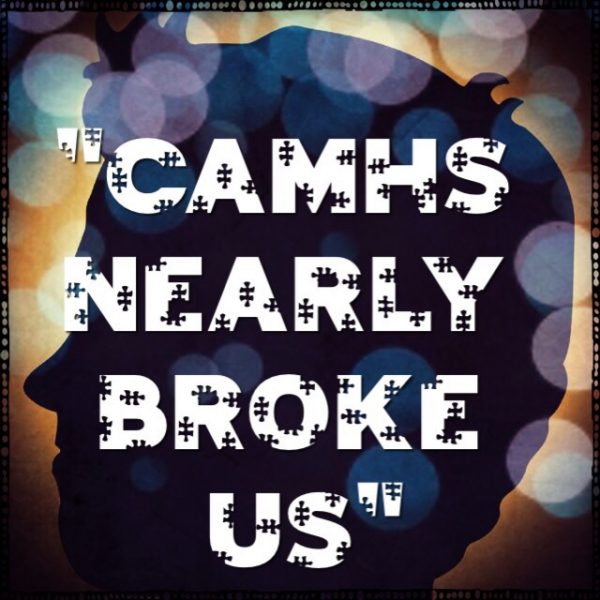 So why is it that so many parents and children are left feeling abandoned, let down and disappointed? Far from the service being as good as the website, parents often tell us that they come away from appointments feeling unheard, talked at, and dismissed. One parent who works as a professional in the healthcare system told me that at her child’s appointment, she was treated with the same scorn and contempt as that of a contestant on the Jeremy Kyle show, her parenting under close scrutiny as a cause of her child’s mental health difficulties. She also told them this too, only to leave them open-mouthed and speechless.

Another CAMHS doctor decided it was a good idea to withdraw approved anti-depressant medication from a child in his GCSE year, even though the last time they had tried this it had had a seriously negative effect. When the parents (and young person) disagreed, she made claims of "research" that supported her view. She also contacted the child's GP behind the parents' back to push her "research" story. When the parents asked her to identify the research, she could not, probably because after thorough searches, they found that there isn't any.

BBC Radio 4 reported that CAMHS spending has been reduced in 60% of local authority areas, this is in spite of the fact that mental health difficulties in children are increasing fast. Last August, Health Minister, Norman Lamb described Youth mental health services in England as “stuck in the dark ages” and “not fit for purpose”. He announced that a government taskforce would be set up to improve child and adolescent mental health services (CAMHS) following concerns raised by NHS England about inappropriate care and bed shortages.

CAMHS again came under the spotlight last November when the Health Select Committee published a report about the services they are providing to our vulnerable young people stating,

‘There are serious and deeply ingrained problems with the commissioning and provision of Children's and adolescents' Mental Health Services. These run through the whole system from prevention and early intervention through to inpatient services for the most vulnerable young people’

The report makes grim reading, especially when CAMHS is your only port of (free) call.  We would be very grateful if someone could enlighten us as to what has happened since then and whether there will be parent and young people with experience of CAMHS as representatives on this taskforce.

Below is an infographic prepared by Mental Health Today that I hope they don't mind us reproducing. It contains startling figures.

CAMHS or the Paediatrician – Who can help?

I hear regularly, and have experienced myself, that if your child has an additional learning difficulty or a diagnosis of a neurodevelopmental disorder such as ADHD or ASD or a neuropsychiatric difficulty such as Tourette syndrome, Conduct Difficulties or OCD, there is very little help available from CAMHS. So you instead, either seek help within the community or see a paediatrician. When seeing the paediatrician, they tell you to seek support from CAMHS. Who can't help. And their budgets have been cut.

For us as a family, this has almost broken us. Our frustration has spilled over on many occasions as we have been unable to help our son. He has been out of school for coming up on three years now, due, we believe, to anxiety. Now in Year 11, he is only likely to attain a foundation-based maths GCSE. For a child who has an above average IQ, it is so difficult to comprehend that we are in this position because it could have been prevented.

When he first went to CAMHS, all he needed was a doctor who listened to him and heard what he needed. Instead he was perceived as wasting the doctor’s time and the doctor actually told him to 'pull himself together'. I was speechless! At the time, we vowed never to return to CAMHS again but several years later we had no choice - and it really was a last resort.

I asked to be referred to a different CAMHS office but was told this wasn't possible and was assured it would be different this time. It was different - it was worse! My son was told he needed to go to school and if he didn’t he wouldn’t get an appropriate education (I wonder if they thought we hadn’t already explained this to him.)

Looking beyond the behaviour

CAMHS could or would not see beyond the behaviour, to discover the root cause of my son's issues. The need to do this is fundamental - so much so it's even in the new SEND Code of Practice as a guide to teachers to find out why a child is presenting with difficult behaviour rather than ONLY just dealing with the behaviour itself. As a newly-qualified mental health professional myself, I know that this is imperative when helping anyone experiencing mental health problems, let alone a child.

One CAMHS 'professional' very recently told my son he will have outgrown his ADHD by the time he is 18. Unbelievable! We are aware that his symptoms may dissipate with maturity but the notion that he will awaken on his 18th birthday ADHD-free, is completely bonkers. Even if that was the case, it wouldn’t take away his whole school experience where he has been left with anxiety and self-esteem issues, lacking confidence and inner self-belief difficulties projected on to him by people who told him because of he had ADHD that he was not, ‘good enough’.

Of course I made a complaint and this gave me the opportunity to explain what I felt went wrong but, as we discovered recently, nothing has changed, at least not yet anyway.

I don’t believe that the doctors don’t care or that they're evil, I believe they have become desensitised by an overwhelming caseload not matched by the budget to make a dent in it. But this can lead to value judgements, comparing one child's need's to others receiving mental health support (possibly in different tiers) and deemed to be, ‘not as bad as those children’. Children need to be individually assessed and treated for their own condition, not have their mental health measured again someone else. At the moment CAMHS and "Person Centred Care" cannot be uttered in the same breath.

This is a problem that needs addressing and soon. Health providers and local authorities need to ensure that no more cuts are made to the CAMHS service and that current provision is fit for purpose. The system is broken and requires a fundamental re-think. With health provision being an integral and statutory part of the new Education, Health and Care plan nothing less is required or an EHCP will become nothing more than an an old-style SEN statement with its fingers crossed.

I have added some websites that might be useful to source other help while waiting for support and we would love to hear your stories about your or your child’s experiences, good and bad. Please leave your comments below.