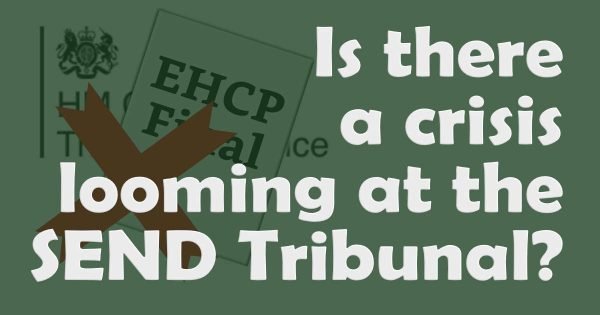 New figures out from the Ministry of Justice have shown a big jump in the number of appeals registered at the SEND Tribunal. It's not totally unexpected; earlier this year, writing in Schools Week, SNJ's Tania predicted that more and more parents would be forced to appeal to the SEND First Tier Tribunal:

"When parents are routinely misinformed, while schools and LAs still deny the existence of a child’s SEND, despite evidence to the contrary, while academies remain reluctant to take on children with SEND and while far too many new EHCPs do not sufficiently quantify or specify support as is required by law, then the tribunal is where more families will end up."

We've analysed the latest figures released by the Ministry of Justice and they show Tania was correct: between April and June this year the number of local authority decisions appealed by parents increased by 29% compared to the same period in 2015, the fastest ever rise.

The annual number of appeals is still lower than the peak of over 4,000 three years ago. However, the Tribunal service appears to be coming under increasing pressure.

Because new EHCPs were taking so long to process, there was a small drop in the numbers of appeals last year. That's now well and truly been caught up and overtaken, as disillusioned parents have their worst fears confirmed. Far from a new era of coproduction, confusion reigns with poorly-trained staff, legally-questionable EHCP formats and a promised culture change that just hasn't caught on.

Add into the mix the fact that EHCPs go from birth to 25 and you're increasing the number of possible applications and hence potential appeals. 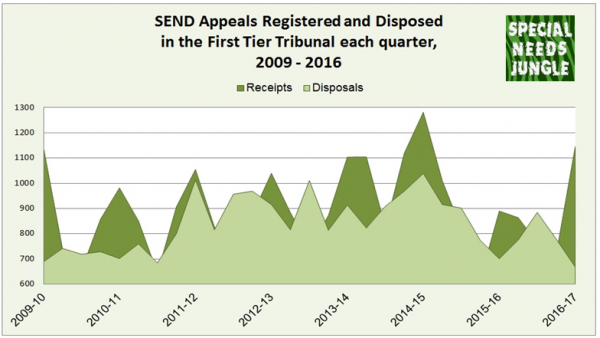 The question is, is this 29% rise just the usual amount for the period PLUS the disputed EHCPs that were delayed from the previous year, or is it the beginning of a new upward trend?

When the reforms were brought in, the Department for Education anticipated there would be a drop in the number of appeals reaching tribunal, as parents and LA staff would work happily together in co-production.  Back in the real world, everyone else knew it probably wasn't going to turn out like that.

There are reasons for this:

The SEND Tribunal has been dealing with more cases than ever via telephone case-management hearings, which give the conflicting parties a chance to resolve disputes before they get to a face-to-face hearing. Another positive change has been that since August, appeals are registered and processed under a new, shorter timescale of 12 weeks, when it had previously been 22 weeks.

The SEND tribunal is also trialling a system where disagreements about the health and social care elements of a plan can also be dealt with in the same process. We hope to be able to bring you more information about this when the results of the trial are out as this does seem a sensible way forward for parents.

Meanwhile, a government consultation, “Transforming Our Justice System”, was launched this month to streamline the entire courts and tribunal operation, adopting a “digital by default” policy on written and recorded evidence. Although SEND appeals account for less than 1% of all tribunal work, the president of the Education, Health and Social Care Chamber, Judge Phillip Seymour, earlier this year issued a double warning for SEND appeals. In his report to the senior president of tribunals, the Judge noted that:

So far the only action to tackle the problem has been a change in practice, when a local authority refuses to assess a child’s needs. The tribunal will only hold a hearing in these cases where the parent requests it; otherwise a decision will be given on the evidence submitted. Parents are already successful in 86% of all cases and this could increase under the new system.

The Ministry of Justice has signalled there may be further changes ahead: “The cost to the taxpayer of our courts and tribunal system is unsustainably high, so it is right that those who use the system should pay more to relieve this burden.”  So far, drastic fee increases have only been made for immigration and asylum cases and for the time being there is no charge to register an SEND appeal. However, parents face significant personal and, if they employ a solicitor, financial costs in trying to win their case. In reality, they pay twice when the LA hires lawyers at public expense to defend their opaque decisions.

Under the Children & Families Act, the Secretary of State, Justine Greening, has to deliver to Parliament a review of how well special needs disagreements are being resolved. The review must be delivered by March 2017 and, since the grotesque Baker S**** Twitter incident, it's likely to focus on the operation of the tribunal and the tactics employed by local authorities. Special Needs Jungle will be gathering your views for this review during the Autumn.

However, taking into account all of the points above, if the DfE does not change its stance on its expected (but apparently incorrect) fall in appeals and doesn't then plan ahead for an increase, then it is compounding the problems families are facing and damaging the prospective outcomes of many disabled children.

It cannot then blame the SEND tribunal for becoming overwhelmed and in crisis, when it's just the last rung of a ladder of policy and political failure.