Hark! I hear screeching tyres swivelling in a U-turn.. or is it just the sound of a General Election approaching? Surely that can't be the reason for the most recent about-face from the government. Well, rather than an about-face, it’s more of an, “Ahem, these disabled students might turn out to be a bit of an angry mob - let's let the next lot sort this out because slashing their student support isn't going to be as easy as it looked - or win us any votes”.

Last October, we posted about the lack of statutory support for Uni students in the SEND reforms. As the Bill was making its way through the House of Commons and Lords, it became apparent that young people with SEN would be excluded from having one of the new Education, Health and Care Plans if they were successful in gaining a place at University. 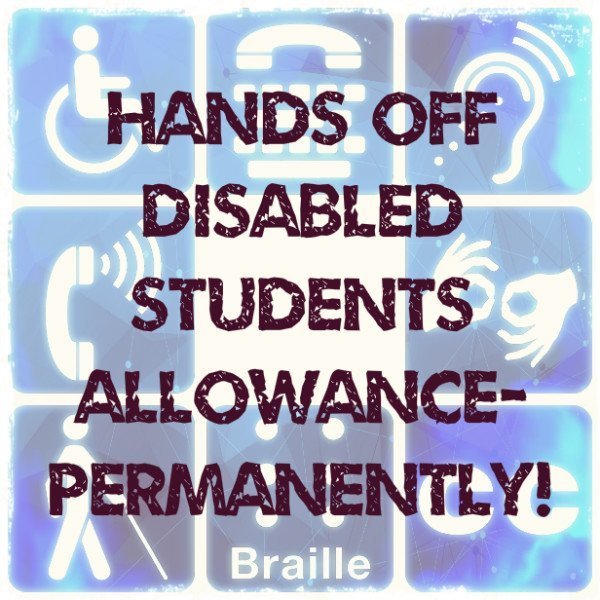 The government assured parents and young people that the Equality Act was followed in Universities (yes,  it would appear they comply with the law which is something we presumed everyone had to) and that the Disabled Students Allowance would make adequate financial provision for students with SEN in University. Nothing to do with the fear of the government becoming liable for university fees for students with EHCPs. Oh no.

As a higher education student living in England, you can apply for a Disabled Students’ Allowance (DSA) if you have a:

The support you get depends on your individual needs and not on income.

There are four allowances to cover different areas of need.

However, as Tania previously said, “An allowance will not spot a young person in crisis or monitor them and take action if needed. It will not be reviewed or outcomes assessed. It is not, in short, protection. The Act gained Royal Assent in March and we had to accept that EHC Plans would not be making an appearance in Universities.

Then in April this year, before the ink was dry on the Children & Families Bill, we heard that the DSA was under threat.  The Business Innovation & Skills (BIS) Dept announced plans for the DSA to be severely cut back. "Hacked" might be a better description.

A written Ministerial Statement (David Willets, MP) said, they would,

“look to rebalance responsibilities between government funding and institutional support. We will look to HEIs to play their role in supporting students with mild difficulties, as part of their duties to provide reasonable adjustments under the Equality Act.

…We recognise that students will continue to need support. However, we believe that HEIs are better placed to consider how to respond in many cases, including giving greater consideration to the delivery of their courses and how to provide support.

We had also heard from a very reliable source that the reason EHC Plans were not available for students in Uni with SEN was down to Vince Cable’s BIS Dept and not the DfE. So, the very department that had ensured the statutory support for Uni students with SEN was limited to Equality Act provision and the support from DSA was now announcing that it would be cutting back on the help provided with the DSA.

No one had to be a rocket scientist to work out the impact of this and we did wonder, " did the BIS just shaft some of our country’s finest young minds who are at the same time some of our most emotionally vulnerable young people?”

Then on Friday, last week, a further announcement came from the BSI.

"For the academic year 2015/16, we will continue to provide Disabled Students’ Allowance funding to help with the additional cost of a computer and assistive software if needed solely because of the student’s impairment. This will be subject to the student contributing the first £200 of the computer’s cost – broadly equivalent to the cost of a basic computer. For future academic years we will explore a bulk purchasing scheme for such computers to keep costs down.

Additional items such as printers and consumables will not be automatically provided, with alternative provision in the form of university provided services such as printing services and books and journals in electronic format to be considered as alternatives.

The changes summarised in this statement other than non-medical help changes will apply to all full-time, full-time distance learning, part-time and postgraduate students applying for Disabled Students’ Allowances for the first time in respect of an academic year beginning on or after 1 September 2015. This provides sufficient time for us to work with institutions and stakeholders to ensure the changes are introduced effectively. All changes are subject to the ongoing Equality Analysis.

Continuing students already claiming Disabled Students’ Allowances and students claiming for 2014/15 entry will remain on the current system of support for 2015/16.

A year ago, in October 2013, at the House of Lords, Liberal Democrat peer, Baroness Northover assured everyone that HEI (or Unis) took the protections provided by the Equality Act seriously. So, what has happened in the last 12 months? Why do they now need a further two years to, “develop appropriate mechanisms to fully deliver their statutory duty to provide reasonable adjustments”?  Weren't they already doing that?

As much as we are very happy that the severe cuts seem to have been put on hold, it does make you wonder if this is due to genuine concerns about the young people involved or purely due to the fact that this was not a popular move and has been heavily criticised by disabled people's groups and the media alike. And with a General Election around the corner, no one wants to be seen as the one to be kicking sand in the faces of those young people who've overcome such difficulties to gain a fiercely competitive university place. They've done enough of that to people with disabilities already.

If the government really want disabled youngsters to have every opportunity to get ahead, they must not cut their ambitions off at the knees. The argument is that as students pay fees, then HEIs  should support their needs without the need for an EHC Plan. But this support isn't mandatory, and we all know this is one of those, "technically true but actually often doesn't really happen," points. And that means that students with disabilities have to choose their universities based on the support available, not the course - which obviously isn't giving our youngsters the same opportunities as their peers.

So to the all the parties who fancy their chances forming our next government, be warned: People with disabilities, their families and their supporters all have a vote. Do you deserve it?