Like many of us, I have children who believe that sleeping through the night is just an urban myth. Oh the joy of having to cope with a full day of paperwork or appointments when you have had a few hours split sleep.

Sleep deprivation is torturous, as you know, but I think my body has become so used to limited sleep that I function fairly adequately all day. However, the thing I find difficult to deal with is the emotional exhaustion this role brings. Being physically exhausted makes everything seem to much worse and trying to deal with the day to day activities becomes such a chore.

Add to this the stress and emotional distress of the community we live in and suddenly there are days when it all just seems too much. 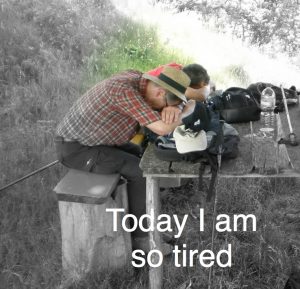 Most of all, I am tired of being tired.

I dream of this world where people genuinely work together, genuinely listen to families, communicate effectively and know what they are talking about; a world where I can cope with the physical exhaustion without the added stress of the emotional exhaustion. It’s not too much to ask, is it?

What about you? Are you tired?

I know that I am not alone. I know that we all have days when we could quite happily go back to bed and sleep for a month (if we didn’t have all the letters to write, phone calls to make and appointments to attend). We all have times when we think “why do I bother?

What motivates you to get up and tackle the world each day?

Thankfully I only have to look at my three children and I remember why I bother.  I also have a few strategies to help me do more than just crawl out of bed.

What motivates you?  What tips do you have to help others to not just get out of bed, but to get dressed, put your face on and face the world with a smile?