A couple of weeks ago, we reported on the latest SEN figures for England that were released by the Department for Education. We noticed that there had been a rather steep drop in the number of children with SEN - 2.5%. This was largely Year 7 children, who seemed to mysteriously shed their SEN status over the summer as they journeyed from Primary to Secondary school. Amazing!

Another perplexing item was the seemingly new category, or in Edu-speak a new 'code' that I hadn't seen before. Here's the bit from the post that I'm talking about...

Talking of proper assessment of need, in 2015 pupils who were formerly School Action but have transferred to SEN support are now required to be allocated a 'type of need'. And so, a new code called, ‘SEN support but no specialist assessment of type of need’  has quietly been introduced. This is something else I find perplexing and when I put a call out on Twitter for a definition, others did too.
According to the new SEND Code of Practice,6.45, when a child is thought to have SEN their needs should be analysed and if relevant an early assessment by external experts is advised. So there should be NO pupils whose needs have not been identified. It's like saying it's a 'CBA (Can't be arsed) to find out,' category which seems to be the complete opposite of the ethos that the DfE want to see. However, later, someone Tweeted that it could be a way to make sure support isn't delayed. Though without assessment, how do they know what provision is needed?      SNJ, SEN figures show 2.5% drop in children with special educational needs in England 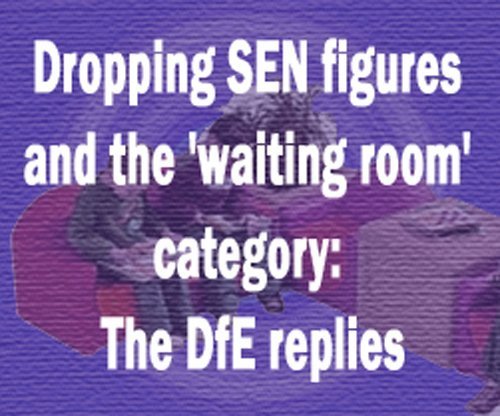 The Department for Education replies...

I figured that SNJ readers would like answers to these curiosities so I emailed the Department for Education for a quick explanation.  Stuart Miller, the Deputy Director of SEND was good enough to reply with answers. Below is the official explanation, reported verbatim:

1. Reduced numbers at ‘SEN support’ – we think there’s probably a combination of factors here (though we're interested to know what others think too):

Note that Stuart Miller does say he is interested in what others think too, so please do tell the DfE your views on this - please make sure you leave your comments in the post comments, (not just Facebook), to ensure they can see your ideas.

In my view, the first point raises suspicions of why the sudden steepness of the drop. And if the final point in the list is true then surely the school should have recorded why a child no longer is listed as having SEN? I would like to see a deeper delve into these figures so that we are not just postulating on the reasons for this big drop. We need to know why and to what extent, the above three points may be true. Or, is there some other reason entirely?

2. SEN support but no specialist assessment of type of need

The second query was about this new code: ‘SEN support but no specialist assessment of type of need’ The DfE says:

"Prior to ‘SEN support’, schools were required to record, on the census, a primary type of need only for those children and young people at ‘school action plus’ or with statements, but not for those at ‘school action’.  It is very likely that the primary type of need would have been known for the majority of those children and young people ahead of previous census dates.

This time around, we think ‘SEN but no specialist assessment of type of need’ numbers may well include a number of children who are receiving support that is additional to or different from that made for most pupils but for whom it has not been possible by the time of the census to establish a definite primary type of need. This may be because specialist advice has not been sought.

So it seems that this category is for children who may have an SEN but who haven't had any type of external assessment by the census cut off date for reporting a school's SEN statistics. That's quite a lot of children who are waiting to have their needs assessed.

It appears that this code of  SEN support but no specialist assessment of type of need is a 'placeholder', noting there is, or may be, an issue with a child. A sort of limbo status, perhaps while some learning interventions are being tried before an assessment is requested. Or perhaps it's like a 'waiting room', while a child has been referred for an external assessment. We know that there is a shortage of Educational Psychologists, Speech and Language Therapists or other experts with specialist training to assess a child so some sort of wait is inevitable (while interventions are meanwhile also being tried)

As the DfE said, previously a primary type of need for children on School Action would not have been recorded, whether one was known or not. But this category says a child's primary need is not yet determined by an expert; it's a big question mark and implies that more will be done so primary need becomes known and then, presumably the child will no longer be in this category.