Some of you may have read a report this week about the use of echolocation in blind children.  In the article, it states "New research from the University of Southampton has shown that blind and visually impaired people have the potential to use echolocation, similar to that used by bats and dolphins, to determine the location of an object."

As you will know my youngest son is visually impaired and in April 2010, we worked with Daniel Kish from World Access for the Blind.  We had been introduced to Daniel via a lovely lady called Sarah from Common Sense (a parent led charity supporting and empowering parents of children with VI in the UK).  We had approached Sarah as we wanted J to be using a cane but here in Kent, the practice (at the time) was to introduce canes when a child was 7 or 8.  However, me being me, I had researched the use of canes for hours and chatted to other parents across the globe - thank goodness for Facebook - and I wanted J to have a cane much earlier.  Common Sense loaned us a cane and Sarah introduced us to Daniel Kish as he recommended using a longer cane than was current recommended here.  The general practice here is to provide a cane which measures from the floor to the user's sternum whereas Daniel advocates using a cane which measures from the floor to the bridge of the user's nose. 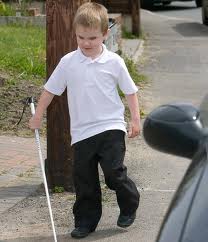 We were very fortunate that Daniel would be in the UK shortly after we contacted him and we arranged for him to spend three days with us.  Daniel is best known for his work using echo-location and we had our first introduction to it when Daniel arrived.  I was amazed to watch this man (with no vision) walk confidently around our home and the local area.

We spent the first day in the local park, walking along a long path which led to a fountain.  Daniel explained how using the sound of the fountain as a target for J would help him walk independently - yes, I was the mum who always held his hand.  Along the path, there was a row of trees and then a large open space.  Daniel explained to J that using a small clicking noise would help him know when the trees were around him and when it was the open space.  I am sure we must have been a very entertaining sight in Kent that day, Daniel and J with their long canes and me with my eyes closed, making clicking noises as we walked along.    But do you know what?  It really works.

You can try it yourself - sit in a quiet room (probably best once the children are at school) and close your eyes.  Hold your hand in front of you at arms length and make a clicking noise; then move your hand closer to your face and repeat the clicking noise.  You will hear the difference.  When an object is closer, the sound is louder and deeper.  You can even do this using a wall in the house - close your eyes as you walk slowly (and carefully) towards a wall and click.  As the wall gets nearer, the sound gets louder.  Then walk towards an open door and hear the difference.

We spent the next two days with several of the practitioners involved in J's life.  His mobility officer, his VI play therapist, his nursery staff and another mum of a child with VI came along too.  It was fascinating for me, as the wealth of knowledge in my house was just outstanding.  As a mum, it was like a Masterclass on all things VI.

Daniel spent time explaining to J how to differentiate size with the clicks.  This involved lining up several glasses, bottles etc and asking  J to tell us which was the largest, smallest, plastic etc. 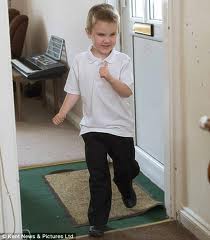 It was three intensive days but three days that changed a lot of what we did.  J decided that clicking wasn't for him so he uses his voice.  He is my son and like me, he likes to chat and if anyone has met me and thinks I talk a lot, they need to meet him and realise I am a rank amateur in comparison.  Due to the fact that he is still a child and less than 4' high, his voice is a great navigation tool for him as objects are still very large around him.  Cars and garden fences are large in comparison to him so this works well for now.

We are now working on the clicking more, as we appreciate that as he gets older, the talking may have to reduce in quantity (or maybe we are just hoping).  We will spend time out as a family and often we all click just to encourage J to do the same.  We are so used to people staring at us as a family that we no longer have any worries about how we are perceived by others.

The local and national press covered the story and J became known as the Dolphin Boy.  Sarah from Common Sense had worked with Daniel and her son was known as Bat Boy.  The media coverage was quite fun to do ; it really helped to raise awareness and of course, I got to sit with Ben Shephard on the GMTV sofa.