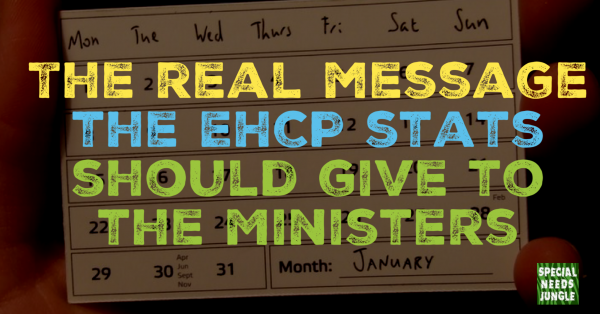 Yesterday’s new SEND statistics reported worrying progress on SEND reform up to January 2016, amid soothing words from the Ministers in charge that the reforms are "boosting the life chances of children with SEND". The facts speak for themselves: according to the DfE's data, the pace of reform is slow, uneven, unfair and unchallenged. So here's an urgent message to get the process back on track.

The EHCP numbers came just as Ofsted’s first local area SEND inspections got under way, in Brighton & Hove and Bolton. Both councils can breathe a small sigh of relief that they completed more than half their EHCPs on time last year and so are within the national average. But parents in 28 authorities had just a 1-in-5 chance of getting their plan within the 20 weeks allowed. Not a single child in Derbyshire, Kingston Upon Hull or Surrey had their needs assessed within the legal time-frame. Not. A. Single. Child.

Okay, it's still a new system and they're also having to cope with the old system as it runs out. But they can’t use high volumes as an excuse: neighbouring Kent issued more EHCPs than zero-rated Surrey yet 86% met the target; Hertfordshire sent out a whopping 585 plans and, even allowing for delays permitted under the rules, 97% ticked the box.

The lead Ministers for SEND (Ed Timpson and Jane Ellison) gave us their view of progress, stating that “Councils are learning new ways of working…” Well, some are... The Ministers had a lot of positive things to say while acknowledging there are some real concerns. Ten days ago Amy Skipp wrote about her research on the experiences of parents, carers and young people in the new system, reflecting the same mix of optimism and disappointment. It’s true that, overall, LAs are gradually getting to grips with the 20 week time limit for new plans. But we learned yesterday much more of the reality behind reform and it isn’t pretty; not pretty at all. So here's my...

Message to the Ministers

Please take another look at yesterday's numbers, and think ahead to this time next year. How would you like to see them change? What can you and your teams do to make the change happen?

In their statement yesterday, the Ministers talked about the need to “strike the right balance between timing of assessment and quality of the finished plan”. If that means we can have one or the other but we can’t have both then I’ve another message for the Ministers: the law says we can and we should. Nowhere in the Children and Families Act does it say that we can get our Plan in 20 weeks but it won’t have any useful aims, or any advice from a professional who has actually met the child within living memory, or any specific, quantifiable provision. Those of us working in SEND are seeing EHCPs which are, I’m afraid, abysmal. I hope the Ministers have read Bren Prendergast’s excellent take-down on the quality of the assessments coming out of County Hall. In fact, I hope the Ministers read SNJ every day: because the reality of SEND reform is written in painful detail right here.