A survey of more than 1,000 school leaders has revealed that more than two-thirds (68%) say they lack the support to deliver the best outcomes for pupils with special educational needs and disabilities (SEND). School heads say the education system is “rigid and discriminatory” and prevents some pupils from reaching their full potential. 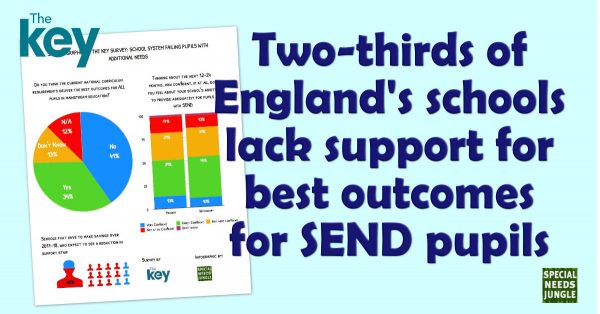 The survey was carried out by The Key, an organisation that provides leadership and management support to half of England's schools. Eight in 10 (79%) of the 1200 school heads questioned say the current curriculum requirements are not providing the best outcomes for all of their pupils.

“The funding for pupils with SEND is not adequate and the referral system for top-up funding is too difficult.” London Primary school leader

The survey also showed that over half (56%) say pupils for whom English is an additional language (EAL) are also being failed while two-fifths (43%) of school leaders saying the system is holding back pupils with an aptitude for vocational subjects.

"Pupils who have barriers put before them will never succeed. The school curriculum needs to be relevant and attainable, not divisive.  The vulnerable and disadvantaged continue to be left behind.  To be socially mobile every child needs to be included.  A considered, realistic approach to improving outcomes for all pupils is needed, using evidence based programmes to provide support for leaders and teachers at this critical time. The gap has been closed where this support has been embedded."  Sonia Blandford, CEO, Achievement for All

The findings come just a few months after a recent government research report revealed that some local authorities do not have any procedures in place to collect and review the outcomes of pupils with SEND.

“There needs to be less pressure on curriculum objectives and a best-fit model for assessment. For example, a strong creative writer doesn't necessarily need to have good handwriting or spelling that meets age-related expectations.”  South-West headteacher

Despite the £1.3 billion announced by Education Secretary, Justine Greening last July, almost half of primary leaders (46%) and two in five (44%) secondary leaders, say that over the next two years, they are not confident in their school’s ability to sufficiently provide for pupils with SEND. More than two-thirds (68%) of the 64% of school leaders who need to make savings in 2017-18 plan  to reduce their Teaching Assistants, who often deliver the only additional input children on SEN Support receive.

“The system needs a greater amount of flexibility as it is very rigid, archaic and discriminatory.” Midlands SENCo.

The school leaders say more funding and additional specialist teaching assistants would help solve the crisis they're facing. Additionally, a greater flexibility in the curriculum and assessments. Some schools have trained other pupils as language interpreters for some children who are learning to speak English, while others celebrate pupils’ different cultural backgrounds with activities or whole-school assemblies dedicated to a different language per month.

The Key invited a sample of its members to complete its annual survey in February 2017. The questionnaire for this study was designed by The Key and conducted online using Survey Monkey. 1,182 school leaders from mainstream primary and secondary schools completed the full survey. The data has been weighted to match the population profile of schools in England in terms of region, school phase and school type. The profile of The Key’s membership database is similar to the profile of schools across England. The data can therefore be taken to represent the views of school leaders on The Key’s database, which in turn provides an indication of the opinions of leaders in mainstream schools across England. The survey was designed, administered and analysed by The Key. Ipsos MORI provided advice on questionnaire design and weighting.

Free resources for schools by The Key