Late last week, the DfE published its latest newsletter about the special educational needs and disability reforms. The issue was packed with information and if you want to read it in its entirety, you can do so here.

There is far too much to go into in depth in one just post, but two surveys warrant further initial investigation. First, the results of a survey of local authorities carried out in 2015 about how their implementation of the SEND reforms was going.

The world according to your local authority may well not bear a lot of resemblance to your own experience, so if these results spark any thoughts in you, please do comment in the blog comments below.

As it happens, the National Network of Parent Carer Forums and Contact a Family surveyed members of England's Parent Carer Forums around the same time and it's been very interesting contrasting the two sets of the results where the questions are comparable. [Sixth SEND survey, Download it in full here]

The PCF survey reveals the views of parent carer forum representatives, who presumably surveyed local parents and carers in turn. This picture may well be different from the data from LAs as it will include how parents feel about their engagement.

So while perhaps lacking 'hard' data of actual numbers of plans processed etc, PCFs will certainly be able to draw valuable conclusions based upon the level of engagement individual forums have been allowed, the parent reps’ local contacts with other local organisations and members’ knowledge of their own and of course other parents’ experiences. If you're in a huge rush now, the infographic at the end has a basic summary.

90% of local authorities in England responded to the survey. While 90% is an excellent response for any survey, a government survey sent to LAs about how they're getting on should, in my opinion, have a 100% rate. I’d like to know which ones didn’t bother to return the survey and why. Maybe they’d gone on their Christmas holidays, who knows?

Worryingly, on the PCF survey, 14% of reps felt their LA doesn’t involve them at all in strategic planning or co-production and the numbers for young people and children are even worse.

Of those LAs who responded:

Of those LAs who responded:

99% stated they are referring parents and young people to Independent Supporters. This is an interesting response as I have come across many parents who were not told of the existence of an Independent Supporter. However, things may have since changed and I hope this is so.

The Department for Education has commissioned the National Development Team for Inclusion (NDTi) to conduct an independent evaluation of the Independent Supporter (IS) Programme.

Interim findings were that parents and families value the support received from independent supporters greatly and particularly the sense that someone is truly on their side, independent from the system that is making decisions about their support. Parents noted, however, that once a plan is received and if there are disputes, it can feel that this personalised support disappears.

The interim findings, that it was too soon to be thinking about ending the IS Programme in March 2016, was echoed by the parents, including me, who met with the SEN Minister at the Department for Education last December. It has since been announced that continued funding is in place for another year at least.

It also found that:

Have I got these comparisons wrong? Let me know below.

I hope to look at some of the other items in the newsletter in more depth in the coming couple of weeks, such as the Post 16 situation and the Local Offer. If you have any comments about this that we should include, let us know. If you have comments about the issues above, do please leave your comments below.

As we sometimes do, we've made an infographic for easy sharing. Click the image to enlarge. You can download a pdf version here 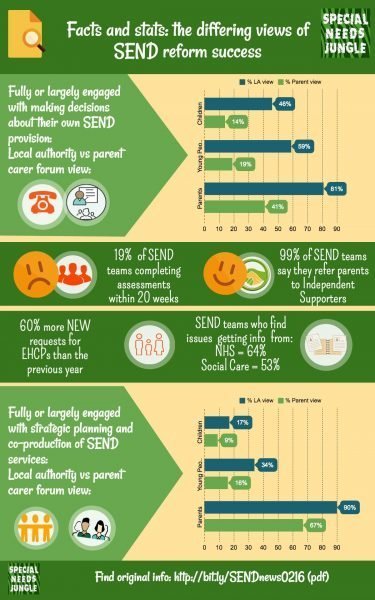