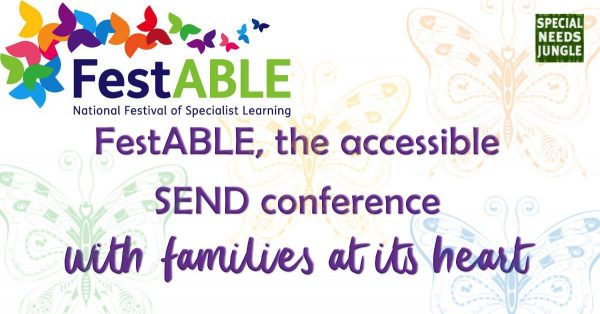 Ever looked at all these SEND conferences that get held around the country and wondered why they always seem to be talking about children and young people with SEND, but don't actually include any of them? In fact, with a few notable exceptions, they mostly don't even include parents either. That's now, in 2018, four years after the passing of the Children and Families Act that put families at the heart of the "system" instead of the system itself.

This June, there's an event turns that on its head. FestABLE is putting disabled children, young people and their families right at the heart of proceedings. It's being held at National Star college*, a specialist college for young adults with disabilities and is a fully accessible event.

As well as notable names in the "SENDerati",  I will be speaking there and so will Renata, and if possible on the day, Renata's son Dominic will also be on the stage. Our columnist Hayley will also be there as well as a very special guest, as David Ellis, chief executive of National Star explains in this article on SNJ today...

Why not all SEND conferences are the same, by David Ellis, National Star college

This year is an important year in SEND. April 1 marked the deadline for Education Health Care plans, the very foundation the Children and Families Act is built upon. Aspirational in nature but seriously affected by central Government’s austerity programme, it has had a deep and long-lasting effect on children and young people and their families. That alone is more than enough reason to launch the UK’s first National Festival of Specialist Learning which will be held on Saturday, June 2nd at National Star College in Cheltenham.

The one-day festival, called FestABLE, is responding to the growing desire to talk about what will work better for young people with disabilities and learning difficulties and how all of us - professionals, parents and the young people - can make difficult things possible. FestABLE will be an opportunity to talk about what's challenging all of us involved in Special Educational Needs and find paths ahead for all the learners and their families.

The festival is for everyone - young people, professionals, parents. It’s an opportunity for people to be informed by leading professionals in the SEND world, to share experiences and to join in discussions about the future.

We are thrilled that award-winning writer and actress Sally Phillips will be one of our special speakers. Sally - who fronted the BBC documentary A World Without Down's Syndrome? - will deliver one of the keynote sessions. Having starred in Smack The Pony and the Bridget Jones trilogy, Sally waded in to the emotionally-charged debate about a new screening test that is said to detect Down's Syndrome in 99 per cent of pregnancies and explored the effect the test could have on society.

Her appearance will be profoundly important, not only to the hundreds in the audience at FestABLE, but also to hundreds of thousands of people around the country who care passionately about education for children and young people with disabilities and special needs. Her personal experiences speak for all of us in some way, and at the end of a momentous day at this inaugural event, her humour and compassion will be of immense value as we take forward the ideas and inspiration we have shared. 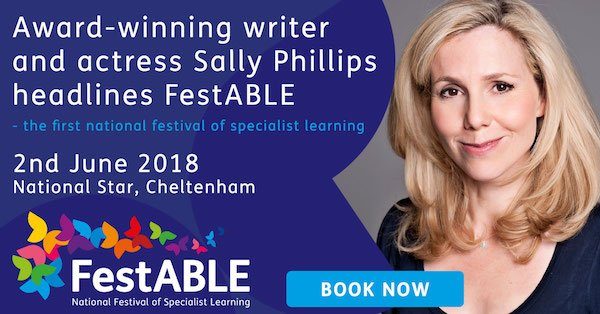 Dame Christine Lenehan, author of the review These Are Our Children, along with Dr George Julian and a senior executive of the Local Government & Social Care Ombudsman will discuss the concerns, highlighted by the Review, around the rights and aspirations of young people with disabilities at a time when systems and services seem to count for more than the voices of those who use them.

Four professionals, including SNJ's Renata, and Andre Imich, will discuss the impact of the Children and Families Act 2014 - its good points and its negative ones. Attendees will be able to ask questions. Professor Caroline Rowland will discuss her research on how children acquire language. Her data suggests the quality of language input is of great importance in children’s later language development. Her work explores how the child’s environment promotes and shapes language growth. Prof Rowland’s Language 0-5 project is the largest of its kind in the UK.

A range of evidence shows that speech and language therapy impacts positively on learning outcomes, behaviour and self-esteem. But will this evidence drive the changes we need to see in speech therapy practice and teacher training? Our keynote speakers will explain this in detail. Sarah Driver and Chris Rossiter from the Driver Youth Trust will debate the need for more integrated thinking to drive good quality SEND support in mainstream schools and a less fragmented offering.

Dr Adam Boddison, Chief Executive of NASEN, the leading membership organisation for education professionals working with learners who have additional needs - will present the national picture of assessment, inclusion and learner choice, arguing that the notion of "outcomes" must be broader than just qualifications.

As well as the presentations, discussions and workshops there is also an opportunity to celebrate all things SEND and to enjoy yourselves. There will be accessible sports and craft workshops, a chance to try out the latest communications technology and, weather permitting, an opportunity to go up in a wheelchair accessible hot air balloon.

There will be quiet areas as well as live music, entertainment and food in the festival village. National Star College’s campus is fully accessible. We hope that this will be the first of many FestABLE events. As hosts, we at National Star passionately believe that with the appropriate support that children and young people with disabilities and learning difficulties can reach their potential. As a college we believe it isn’t what you can’t do but what you can.
That will be the spirit of FestABLE - working together to improve the opportunities and support for the next generation.
Tickets can be booked at: http://www.festable.org