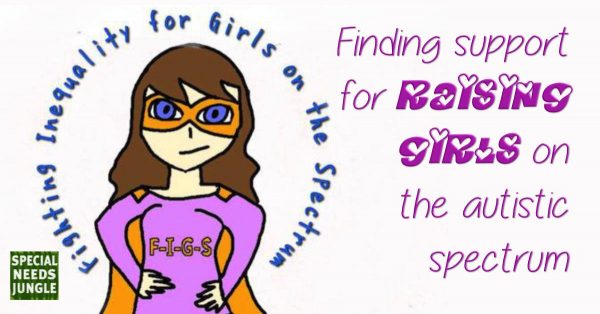 We've written before about girls on the autistic spectrum a few times before and, of course, I am one myself (an old girl!), so it's a subject close to my heart.

When I was diagnosed, at 48, some of the tests used were, the psychologist said apologetically, designed for children. But more than that, they were designed for boys, as girls with autism were thought to be few and far between. Turns out that, if you use a diagnostic scale set up for boys' behaviour, you're going to miss lots of girls because their behavioural profile is very different.

Like boys, they want to fit in and they often want to be social but don't get it right. Some autistic girls learn, to some extent (as I did), how to 'mask' their symptoms and try, with varying success, to model themselves on their socially successful classmates. Meanwhile, their mental health and lack of understanding of who they really are can suffer, showing up as anxiety, depression, self-harm and worse. But even in 2018, girls like these, and even those whose symptoms are too severe to allow even cursory 'masking,' are still finding it tough to get a diagnosis and appropriate support,

One mum, Mandy Chivers, is doing something about it. She's started a support group and a website, Fighting Inequality for Girls on the Spectrum, or FIGS UK, to try to end the disparity. She's written about her experience for us today.

'Just' Another NT Mum, fighting for her daughter on the autism spectrum

'Just another neuro-typical mum' is a title has been thrown at me a lot recently, in an attempt to make me feel like my views are not important, because I'm not diagnosed autistic myself. let me tell you what if feels like to be Just Another NT Mum. The first thing you realise is there is nothing ‘just’ about parenting a child on the spectrum. It is a constant battle to be heard and get your child support and if you have a daughter on the spectrum it is even worse.

Having battled for a diagnosis for my daughter for seven years, I thought we were the exception. But we were not 'unlucky', it turns out. After my 11-year-old left her 11thsetting (specialist), I decided to find out if it was only us being let down. I contacted a very knowledgeable friend, who coincidently also had to fight for a diagnosis for her daughter and we both agreed that everything around female autism is a fight. A fight to be believed, a fight to access support, especially when in crisis, a fight to the right educational provision and then a fight to get support within said provision. On the back of this lengthy conversation, we decided to set up FIGS – Fighting inequality for Girls on the Spectrum. It's so bad where we live, that parents are considering opening their own free school, We spoke to professionals, off the record of course, who are also aware it is a huge problem.

Creating our own support

We decided to go national and created a poll for new members. Within five days we had 375 members from across the country and some very interesting statistics and truly horrifying accounts. 100% of the completed polls said there was no suitable provision for girls in their area, so not just a local problem then. It could be explained by the fact 85% felt there is no understanding of female autism when seeking a diagnosis in their area, or the 90% who were originally diagnosed with mental health issues. Doesn’t fill you with hope, does it?  This is just a snapshot, but we feel the statistics already speak for themselves. Our membership has now grown to over 2000 and we have set up regional support groups. Myself, Helen Bates and Vicki May have worked tirelessly to lobby professionals to promote a greater understanding.

If in 2018, we still have professionals telling young girls that they'll grow out of their autism, we are kidding ourselves if we believe the system is geared up to help any child on the spectrum, let alone girls.  Having read the NICE guidelines, I am desperate to find the Utopia where they are followed, as they bear no resemblance to the experiences our members have encountered.

There appears to be little provision across the country for girls on the autistic spectrum. Girls are being placed in schools for mild learning difficulties where there is little if any,  autism training or they are being put in mainstream schools and struggle to cope. Parents are resorting to home-educating, as they can longer watch the system emotionally destroy their daughters.  Families are being driven to breaking point. 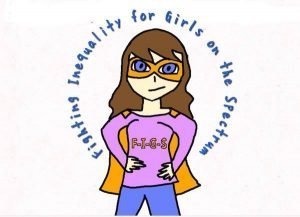 It's unacceptable that the average life expectancy of an autistic person is 56 because of the high rates of suicide. Young people on the autistic spectrum being 28 times more likely to consider self-harm is unacceptable. We believe, as government ministers so often say,  “All children should have the same opportunities to reach their full potential," and that this should mean autistic girls too.

Everything you read while trying to get help, stresses the importance of early diagnosis. But this isn’t happening; parents are being fobbed off with excuses like ‘she’s just shy’, ‘it’s a phase’ or my personal favourite, ‘it’s your parenting’. By the time you finally get the diagnosis, the damage has been done and our statistics show that on average girls are being diagnosed at least a year later than boys. It took only three years to get my son diagnosed opposed to seven years for my daughter.

We recognise that these girls have huge potential if they are supported correctly. But in the current system, there's a very real risk they will fall through the cracks, as well as cost the NHS a great deal of money in years to come because of the associated problems of being diagnosed late, through no fault of their own and at a huge personal cost too. We believe that being diagnosed earlier will save money overall.  We know from speaking to mental health professionals that the system is at breaking point and other agencies are having to pick up the pieces, again earlier diagnosis and support is vital to try to prevent things reaching crisis.

We are campaigning for recognition of Girls on the Spectrum, to start a conversation so future generation of girls and their families can access the right support, from diagnosis to provision. Now that would be 'Just'.