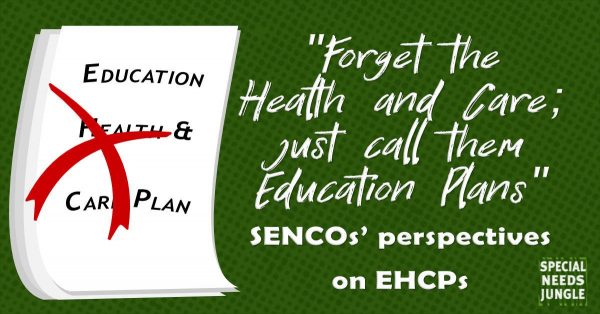 New research from the Centre for Research in Autism and Education has explored what SENCOs think about Education, Health and Care (EHC) plans,

The full research article by Laura Crane, Deputy Director of CRAE at UCL Institute of Education, and Lauren Boesley, formerly a postgraduate student at CRAE, has been published in the Journal of Research in Special Educational Needs, but they've written a summary of the key findings exclusively for Special Needs Jungle.

“Forget the Health and Care and just call them Education Plans”: SENCOs’ perspectives on EHCPs by Laura Crane and Lauren Bosely

Two of the key principles that formed the foundation of the SEND reforms were person-centred planning (recognising that young people and their parents are experts in understanding their needs, empowering families to take the lead in decision-making) and multi-agency working (involving collaboration between education, health and care services).

Central to the SEND reforms were the replacement of Statements of SEN with integrated Education Health and Care (EHC) plans. These documents are used to identify the educational, health and social needs for children and young people, and describe the additional support required to meet those needs.
Special Educational Needs Coordinators (SENCOs) are often responsible for the application of EHC plans yet, despite their critical involvement in the process, surprisingly little attention has been given to SENCOs’ experiences of initiating applications and transferring Statements of SEN into EHC plans.

Sixteen SENCOs were interviewed about:

SENCOs felt that EHC plans were still being perceived as education documents and were not yet the wraparound care plans that had been envisioned. Despite frustrations with the process, when person-centred planning and collaborative working came together, experiences and outcomes were encouragingly positive, and SENCOs felt that EHC plans had the potential to be powerful tools.

Improvements to the process may include: the establishment and integration of evidence-based frameworks to improve person-centred and multi-agency working; greater collaboration between Local Authorities and SENCOs to reduce procedural challenges (e.g., regional disparities); and greater awareness of the challenges of accessing EHC plans for children with SEMH needs.