As any parent knows, all children are individuals with their own personalities and I have spent hours wondering how I can have three children, all raised in exactly the same manner,  yet all so different?  Add to the different personalities, the additional chaos of a variety of SEN and I am sure you can imagine how entertaining our house is.

My eldest son, K, is hugely literal and teasing is something he just does not get.  We have tried so many times to explain it but I totally understand his view that saying something that isn’t true to someone just isn’t funny.

My youngest son, J, is very aware that his brother is hugely literal and likes to use this for his own entertainment.  He likes to sing a little ditty which goes "I love you K, yes I do, I love you even when you smell of poo" (oh yes, the joys of little boys) and J takes great delight in K's adamant insistence that he does not smell!

We also had one incident where I was startled by genuine screaming from the boys bedroom and I honestly think I gave Usain Bolt a run for his money to get to their room.  On arrival, K was hysterical and telling me he could never sleep ever again - which was obviously not something any parent wants to hear.  J was falling around with laughter and couldn’t tell me why K was so upset.  After eventually calming K down, it transpired that J was not happy that K wouldn’t share his iPad with him that evening so had decided to tell him - just as he was falling asleep - that boys eat boys.  His actual phrase was “do you know what K?  Boys eat boys.  Boys eat boys when they are in bed.  They eat boys when they are asleep in bed” and I know that was the exact phrase, thanks to K’s echolalia.

I sat calming K down and explained that J was just teasing and boys did not eat boys, ever - not when they were asleep, not when they are awake, never.  At which point, J (who unfortunately shares my need to have the last word) decided to mutter “they do, K - mummy just wants you to go to sleep so she can go back to bed”.

I counted to ten, very slowly.

A few mornings later, I was having one of those school mornings when time is not your friend.  I asked my daughter, R to help J find his school shoes.  R, has managed to perfect the technique that many parents will be familiar with on school mornings - reverse Burlesque.  The skill that some children have to dress incredibly slowly; put one leg into trousers, pause for a minute or two, put the next leg half in, pause again for a moment, finish putting trousers on (with immediate help required for buttons and zips), pause, dance to a song on the radio, then find school shirt, pause and so on.  Interrupting this is something I normally avoid at all costs but she was near the shoe box so I took a chance.

May I also share that R is really a 14 year old masquerading as an 8 year old.  There is no other explanation for the dramatical emotional responses we often get.  When I asked her to “pause her pausing” and grab J’s shoes, I was the lucky recipient of the perfect “Kevin and Perry” impression.  Yes, R has to do everything in our house, it's not fair, it's always her.  I'm sure you know how the rest of the rant went.

At that point, K decided to chime in with “why can’t J get his own shoes? Is it because his eyes don’t work or is he just not very clever?”

I counted to ten, very slowly.

J was deep in thought the other day and when asked, he wanted to know if he could catch "that brain thingy" K has.  We have explained to the twins that K's brain works differently.  When I asked why he was worried about that, he replied "well, I am just not interested in ADT alarms (K's obsession of the moment) and K doesn't like listening to Pink Floyd (J's favourite group) so I just think I'd rather not catch it". 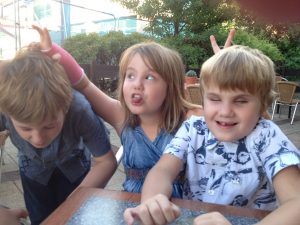 Every week, we have an incident where having three children with different SEN either makes us laugh until we cry, makes us swell with pride or sadly, just makes us cry.

Having J believe that the only down side to autism is not being interested in Pink Floyd or  having to learn about ADT alarms makes me swell with pride.  It makes me realise that no matter how much we get frustrated with the system, the changes, the budget cuts and the bureaucracy, our children are not aware of it.  That has always been our goal.

There is a saying - "I wouldn't change my children for the world, but I would change the world for my children" - that is definitely the case in our chaotic house.