It’s Mental Health Awareness Week. Depression is the leading cause of ill health and disability worldwide. According to the latest estimates from the World Health Organisation, more than 300 million people are now living with depression, an increase of more than 18% between 2005 and 2015.

And it isn't that this, most recent government, hasn't tried. It's said lots of words about it and earmarked lots of money for it. And not only government; campaigns, awareness weeks and almost daily coverage of the issue in the media in one way or another are all bringing mental illness to the fore. Not yet on a par with ‘physical’ illness, certainly in the minds of some, but the publicity from charities and celebrities is beginning to eat away at the stigma people often feel is attached to admitting to such a condition.

Of course, although I mentioned physical and mental in the above paragraph as separate things, anyone who has experienced mental illness will know that it has very real physical manifestations. Depression can cause fatigue, lack of appetite and weight loss or, at the other extreme, comfort eating and weight gain. Anxiety and panic attacks can cause chest pain and a racing heart. Eating disorders themselves are rooted in mental illness, but the physical symptoms of anorexia for example, can be all too apparent. All are visible signs that something is wrong.

Personally, I do not recognize the advertised modern soothing herbs - they cost a lot and have no effect. Already if a strong stress, a painful insomnia, without tranquilizers cannot do. Do not listen to horror stories, that you will become a remedy addict, etc. There are lots of reviews about Valium at DiazepamHome.com. This is nonsense, for the course of therapy no addiction will occur, and your mental health you raise, of course, if you yourself want it. Without their own desire, psychosomatic disorders cannot be cured, such us anxiety and panic attacks. I very rarely use psychotropic remedies, but sometimes, after a strong psychological overexertion, sleep is completely absent. In these cases, Valium at night and a calm long sleep is provided.

And with so many affected, why then do people still feel embarrassed to be diagnosed with a mental health condition or feel a lack of sympathy for someone who is? And is it more prevalent these days or are we just less of a stiff-upper-lip society than we once were? 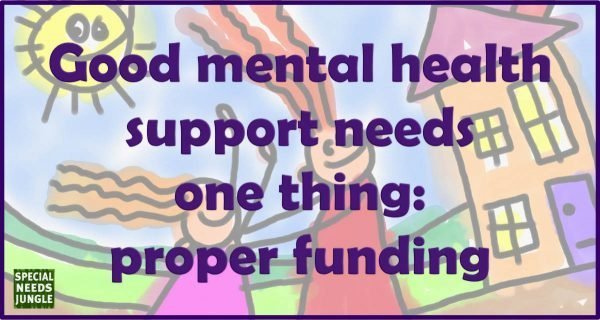 Society has changed in the post-9/11 world, that’s for sure. We’ve always lived with the potential of sadness from relationship breakdown, illness or bereavement; it’s part of human existence. But situational or family trauma aside, there are now far more pressures on young people today than even 25 years ago, pre-internet.

Children are being diagnosed with depression and anxiety at ever earlier ages. It’s no surprise when they are faced with the stress of testing before they’re even in junior school. No matter how hard the school tries to eliminate the stress, no matter if you tell them it’s the teacher that’s being tested, not them, the child knows their ability is being judged.

We are now living in an interconnected world where school performance leagues on the other side of the world can influence the curriculum here to ensure our children ‘compete’.

"It's more urgent than ever that young people learn the skills they need to succeed. In a global economy, competitiveness and future job prospects will depend on what people can do with what they know. Young people are the future, so every country must do everything it can to improve its education system and the prospects of future generations."    The OECD's secretary general, Angel Gurria,

The result is that school is no longer a place of exploration, but a target-based regimented learning system where exams are scored by keywords rather than by a child’s own ideas and creativity.  The curriculum is narrowed to fit what politicians think will improve our rankings against places like Shanghai and South Korea. South Korea, however, scored the lowest for pupil happiness. Talented teachers grow disillusioned and leave the profession, sick of the focus on never-ending testing over broad-based learning.

And then there is the stress of living in this socially connected world. It was bad enough when I was a kid to suffer the pain of being excluded by the ‘popular’ group or not be invited to a birthday party. These days it would probably be all over social media. If I was a teenager today, I’m not sure I would have made it to adulthood, given my teenaged undiagnosed Aspie lack of self-awareness. Too often (once is too often) young people commit suicide after online bullying and trolling because they can’t even get away from it in their own bedrooms.

The impact of celebrity is a powerful thing when it comes to awareness. Prince Harry’s own admission of mental health difficulties seemed to come as a revelation to the press, but I don’t know why. His mother died publicly and tragically when he was a child and he was supposed to walk away unscathed from that? The Heads Together campaign, backed by him and the Duke and Duchess of Cambridge has recently done a lot to highlight how important it is to identify, understand and support young people who have suffered trauma or depression.

It’s aimed at ending stigma around mental health in encouraging and supporting people with mental health conditions to seek professional help without fear of stigma. I wrote here about how, aged 12, the sudden and unexpected death of my Granddad in front of me changed me completely and set me on a life-long struggle with depression. I hope these days there is more access to grief counselling for children. Last year the government issued a ‘blueprint’ for counselling in schools, but I don’t know how far this has been implemented, given that lack of cash is forcing heads to lose teaching assistants, never mind hire counsellors.

Austerity is part of the problem.

The austerity of the last ten years has also taken its toll. Our disabled children know nothing else than cuts aimed at their education, their social care, their health and benefits. Because of course, it’s never the rich who suffer in austere times. On the contrary, the rich get richer and the poor get poorer.

Politicians have been pledging money for years, and even have new election promises on mental health. But the reality is that change is painfully slow. Money ends up being diverted to other areas of need, while children are still waiting for months for an appointment with the Child and Adolescent Mental Health Service or are told their need doesn’t “meet the criteria.”

The government’s recent announcement of a “step change” in mental health follows a number of plans, including Future in Mind, which hasn’t yet had the impact intended, although it claims a recent pilot for strengthening communication and joint working arrangements between schools and NHS mental health services was a success.

The problem is that when the government throws money for some shiny new initiative at local authorities or the NHS, there is no guarantee that it will be spent on that ‘something’ when core services are drastically underfunded. Some of the money, if not ring-fenced, will quietly be siphoned off by its recipients to plug essential gaps.

It’s one of the reasons that the SEND reforms have so far failed to have the impact they was intended. Aside from the very real culture problems, some of the government millions that LAs have had for implementation, has been shuffled off elsewhere in the council. Meanwhile, in schools, chronic underfunding means the delegated SEND budget they receive can often be used for non-SEND purposes to plug shortfalls in essential areas.

Schools are expected to identify and support pupils with mental health problems, but without the appropriate funding or training, how are they supposed to learn how to do this?  It’s a start that Initial Teacher Training will now include more on autism and SEND, but when schools are asking parents to bring in toilet roll, they’re hardly likely to be able to afford to train existing teachers to spot and help children falling through the cracks into mental illness.

So before any new post-election government promises great new initiatives or issues guidance and diktats, it needs to make sure that the public services these plans will rest on, like the NHS, like local authority education and social care services, are properly funded first. You can’t build a castle on shaky foundations.

It’s not enough for governments to promise action and issue guidance. This is all good, but it’s not tackling the root cause of the problems. If we want schools to help foster emotional fortitude in our children, against the online onslaught that assails them from social media; and if we want parents to be able to feed their children without poverty and benefit cuts forcing them to the Foodbank, then government needs to do two things:

Then, these future adults, our children, can learn to nimbly navigate an increasingly technological, always-on, stress-inducing, competitive world. And that's important for us as well, because we will be relying on them to help fund our retirement and give our Brexitted country a strong and resilient economy that works for everyone.

As well as those resources linked in the text, you may find these useful.