Tania's note: A parent post today, but it's not a personal tale of an experience with the new Education, Health and Care Process. Instead, it's a lesson for everyone involved in the SEND system that you may well be grateful for.

In fact, Bren Prendergast,  or @bjpren as you may know her if you're on Twitter, is an SpLD Tutor as well as the parent of a child with additional needs. Bren won cases against her LA after they threatened her with court action over her son's non-attendance due to issues with his school. Bren volunteers for a large charity that gives free legally-based advice. She also assesses students for Access Arrangements for their exams. On her Twitter bio, Bren describes herself as "Often outspoken, definitely opinionated", and her post for us today is one you should bookmark or print. It's about the EHCP process or, as Bren describes it, The Great EHCP Swindle. 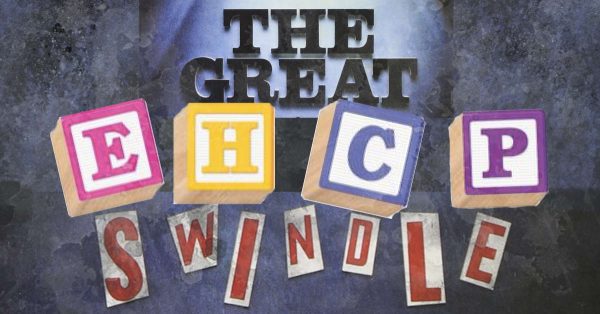 I was about 11 when the riotous sounds of Punk assaulted our eardrums and I loved it. I wasn’t a big Sex Pistols fan, but Johnny Rotten (John Lydon) fascinated me. It wasn’t so much ‘Anarchy in the UK’ but more, ‘why do we have such stupid social conventions’. By the time he had released ‘Metal Box’ with his band, Public Image Ltd, I was studying for an ‘O’ level in commerce. Part of that ‘O’ level was a section on the shiny, new Sale of Goods Act (1979). I discovered Law and I loved that too. I was an odd child.

What I didn’t realise then, was how much influence that would have on me, as I learned to swim through the shark-infested waters that is the world of SEND. For a great many families, that really is Anarchy in England.

The more shark bites my family suffered, the more I looked to Law. If the Sale of Goods Act told of consumer rights, then the Education Act would tell of, well, educational rights! Law is not there to be flexible, it is there as a clear set of rules by which we all must operate. They may influence some social conventions, but not all social conventions are stupid!

The SEND reforms are not running smoothly, although EHCPs are little more than a statement with a bit of Health and Social Care. Much of the underpinning law (and subsequently case law) remains the same, so why are local authorities (LAs) apparently so confused? I do realise that there are many new, inexperienced staff employed to write EHCPs and a distinct lack of professionals to provide input. Only individual LAs can say why they did not pro-actively seek to train/secure the necessary staff. They knew it was coming after all and they knew all about how SEN Statements should be written, didn’t they?

The LA has responsibility for all children and young people in its area with SEND (Section 25, Children and Families Act (CFA)). It is the LAs duty to secure an Educational Health and Care Plan (EHCP) Needs Assessment (Section 36) and secure and maintain an EHCP (Section 37). These duties cannot be delegated. These are LA duties.

A transition from statement to EHCP must follow the same Needs Assessment that is required when an EHCP is first requested. SEN Regulation 6 (1) details all the advices that the LA must obtain. Being set in statute, these are non-negotiable (unless everyone considers that existing reports are sufficient; old reports are unlikely to be sufficient). However, looking in Section K (advices) of the majority of EHCPs that I have seen to date, many (sometimes all) advices have been absent. LAs cannot ignore SEN Reg 6, it is law.

Additionally, I am hearing that many LAs are telling schools and colleges that they must write Section B (description of needs) themselves. The SEN Code of Practice (9.53) states that the ‘local authority must prepare a plan’. It does not state ‘the local authority can delegate the writing of a plan to whoever it sees fit’. There are two issues that jump out at me here: this is tying up the resources of schools and colleges and; a badly written Section B will result in a badly written Section F (provision). Parents and schools/colleges alike should also question whether they have the necessary level of expertise to write Section B (and bear in mind that it is not their duty to do so).

The basics are straightforward, the EHCP should set out all the needs and the appropriate provision (Section F) to meet those needs (which must be specified and quantified, and generally including TA ‘hours’). These sections should be written without consideration of cost.

If I go back a step, and I’m sorry if I’m labouring a point here, there’s that pesky SEN Reg 6 (1). If the LA has not secured these advices, how is a school/college going to know what should be written in Section B? An unwitting placement may use its own resources and pay for reports themselves – and some are actually being told they must do this! Others will be fumbling about in the dark. The whole point of a Needs Assessment is to establish the needs and the provision to meet them. 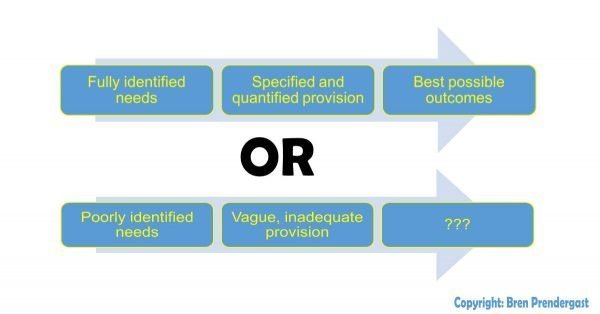 The school/college that has not had good quality, impartial training, may end up writing really bad Section Bs. The LA will write the provision based on this incomplete information. A school/college may then find that the provision is wholly inadequate and ask the LA for Element 3 (top-up) funding which will be refused as it is not indicated on the EHCP….

An unwitting school/college may end up stumping up for the support that should be funded through the EHCP. CFA Section 66 is the Governors ‘best endeavours’ duties. The LA must secure the provision in section F, so, even if some of the provision is ‘that generally found in mainstream’, provision has to be set out in the EHCP. S66 is a pro-active duty to use beast endeavours to secure support for students, but the school/college should not have to provide funding for what ought to be in section F, but isn’t. S66 should therefore be the funding put aside for those students who are effectively ‘SEN Support’.

In regards to students on LDAs, the Children and Families Act 2014 (Transition and Savings Provisions) (Amendment) (No 2) Order 2014 states at Article 28 (3) that section 36 of the C&F Act does not have effect in relation to a young person with an LDA before 1st Sept 2016. Section 36 is quoted above: the duty to secure an EHCP assessment. At (10) it states:

In making a determination or forming an opinion for the purposes of this section in relation to a young person aged over 18, a local authority must consider whether he or she requires additional time, in comparison to the majority of others of the same age who do not have special educational needs, to complete his or her education or training.

S36 comes into force on 1st September 2016 – to secure an assessment. As an LDA only has weight under s66 (best endeavours), provision in an EHCP must come via the LA – and costed/paid for accordingly. Will LAs be pro-actively seeking out this cohort, will colleges already under incorrect pressure from LAs seek to identify them, or is another storm brewing?

(It is recommended that all student who have LDAs and have not completed their education (excluding university), should request an EHCP as soon as possible.)

Now where did I leave my PiL Greatest Hits CD?

You can find Bren's own blog here.