It's Mothers' Day, at least it is here in the UK.

For me, this will be the first year that Son1 hasn't spent Mothers' Day on the football pitch. That doesn't mean he'll be spending the day with me, though. This year he will be at his part-time job that he recently got himself in the kitchen at Wetherspoons in Alton. Because of this job, he has finally learned how to wash his hands properly. At work, anyway. This will no doubt come as a relief to the patrons.

I asked him why he didn't apply to be a waiter. "Because I don't like people," he replied, proving that you can help to level the playing field of life for your Aspergic child by securing the right schooling but, at the end of the day, they still have Asperger's. Youngest, meanwhile, will no doubt fling a card my way before returning to the TechnoLair.  I am currently still awaiting the completion of their EHCP transfers, with Son1's almost two months overdue for various reasons.

These are difficult days for me as their mother. It's time to loosen the apron strings, not knowing how far is too far but knowing that it needs to be a slow, gradual yet vigilant process. Luckily for us, our boys feel able to be open with us as far as they want to be about growing up issues. I did once ask Son1 if we needed to have "that talk" about girlfriends. He just smirked at me and asked what it was that I needed to know.

I remember being his age - at 17, I had already long left home following a mental health crisis, the culmination of a lifetime of never quite feeling good enough to win the attention of my own mother, unless it was for all the wrong reasons. At 17, I had found the peace and stability of living with my Grandma. Now they are both gone, my absent father has recently been diagnosed with Alzheimer's and it has brought home to me once again, the importance of being the kind of parent that your child needs you to be rather than the kind of parent that it's convenient for you to be.

That means not just physically being there, but emotionally. Children who grow up with emotionally unavailable parents are likely to face much more difficulty in achieving a healthy relationship themselves; they have no experience of what one should be like.

I have been lucky. In 1997, I won the husband lottery and he has, over these past 18 years, proved that our sons won the father lottery too. Because of him and his unfailing support, I have been able to be the mother both that I wanted to be and that our sons needed. Lucky indeed.

No relationship is perfect, but the faults are always mine. He has always caught me when I've stumbled, supported me when I've been weak and, in these last few years, picked up the household slack as well as working long hours in the City, while I have felt sorry for myself about my illness and wasted too much precious emotional energy where it wasn't appreciated.

So while I know there is a Fathers' Day in June, I would like to dedicate my Mothers' Day to my husband who constantly supports me as I try, within the limits that I now have, to be the mother that my boys need. Thank you, Marco. 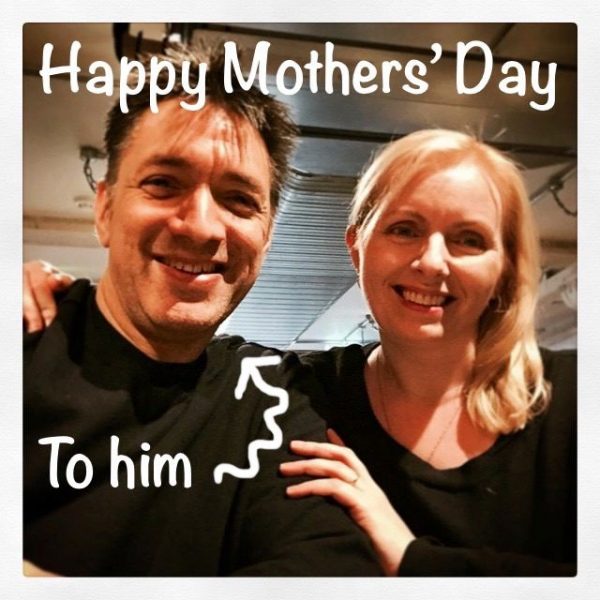 Who is your Mothers' Day heroine - or hero? Tell us in the comments below - and if you're a mother, have a very happy Mothers' Day. You deserve it.