Sense, the charity that helps people who are deafblind or who have sensory impairments, are running a public inquiry into the provision of play opportunities for children aged 0-5 with multiple needs in England and Wales.

Play is an essential part of every child’s life. In addition to being fun, playing helps children gain vital social and communication skills and to develop an understanding of the world around them. Sadly, children with multiple needs often don't get the same opportunities to play as other kids.

Sense's inquiry we hopes to find out more about whether barriers exist to children with multiple needs accessing play, and to learn more about what works. The Rogers family knows only too well how the effects of this. Lesley Rogers has written about her experience for Special Needs Jungle. 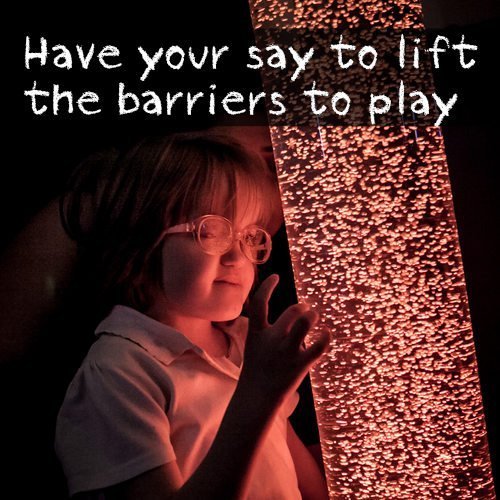 I have an eight-year-old called Ruby, she was born with a rare condition called CHARGE syndrome and is consequently deafblind, she also has a heart condition and feeding problems. Ruby is not independently mobile but she is a very determined little girl and she certainly doesn’t like to be bossed around.

Shortly after Ruby was born we started getting support from the children’s sensory team. A vision impairment and a teacher for the deaf would visit and work together helping Ruby to learn about the world around her. Those visits and the support they provided early on was essential, through pictures, toys and play we learnt basic sign language. We also received some support through Portage, initially weekly session however when Ruby reached nursery age they stopped coming.

I struggled to find places to take Ruby outside of the house; most playgroups were not geared up for Ruby. I wouldn’t take her to regular toddler play groups, I felt vulnerable and isolated. I didn’t want to explain to the other parents what is wrong with Ruby, and I wanted to go to places where I could meet people who would understand.

When Ruby was 18 months we were introduced to the deafblind charity Sense, it was a lifeline. We started going to the Sense play group, Sparkles, in Barnet. It used to take me 40 minutes to get there, but it was worth it. You didn’t need to explain to anybody what was wrong; if you came along with a feeding pump and a suction machine, it was accepted.  I found everything I needed there, support from other parents and expert knowledge from Staff, It was a real support network which is why when Ruby came to leave Sparkles and start school we felt quite apprehensive about where we would turn to next.

Over the years I have spent so much time researching activities and play opportunities on the internet. I don’t want Ruby to miss out so I have thoroughly explored my borough but nowhere fully meets her needs. I’ve learnt that you have to be very proactive; I approach establishments, tell them about Ruby and ask if they are willing to make adjustments. I did this recently with a soft play area that opened nearby. The lady who runs it is fantastic; she lets us come in an hour before opening so we can have the place to ourselves. I wish more places would be as flexible and understanding as this.

Play is such an important part of every child’s life, and it’s particularly important for children like Ruby as it helps them to develop her social and communication skills. The harsh truth is that families like ours do face barriers in accessing Play. I’m aware that I’m naturally quite determined but I worry for other families who don’t know how to push for what they are entitled to and more importantly deserve.

The charity is calling for evidence from parents of children with multiple needs, specialists from the disability sector and practitioners. Visit www.sense.org.uk to find out about the many different ways you can get involved. If you would like any more information about the inquiry, please get in touch with Sense at playinquiry@sense.org.uk

Watch the inquiry video below.