If you switched on BBC2 this morning (June 2nd 2016), you would have found me, Renata and some of our children on the Victoria Derbyshire show talking about experiences of the SEND system. [update: see the interview here]

We'd been invited to give parents' views about a new report out today, highlighting the struggle of mainstream schools in England to support more than million pupils with special educational needs or disabilities (SEND) amidst delays to assessments, insufficient budgets and cuts to local authorities. School leaders are calling for a greater focus on SEND in ‘mainstream’ education policy-making.

The report is from The Key, an organisation that provides leadership and management support to almost half of schools in England.
The findings, based on the views of more than 1,100 school leaders, reveal far-reaching and systemic issues in the support currently available to children with SEND. More than eight in 10 (82%) schools across the country say they have insufficient funding and budget to adequately provide for their pupils with SEND. Almost nine in 10 (89%) school leaders have seen the support they receive for these children affected detrimentally by cuts to local authorities’ (LAs’) services. 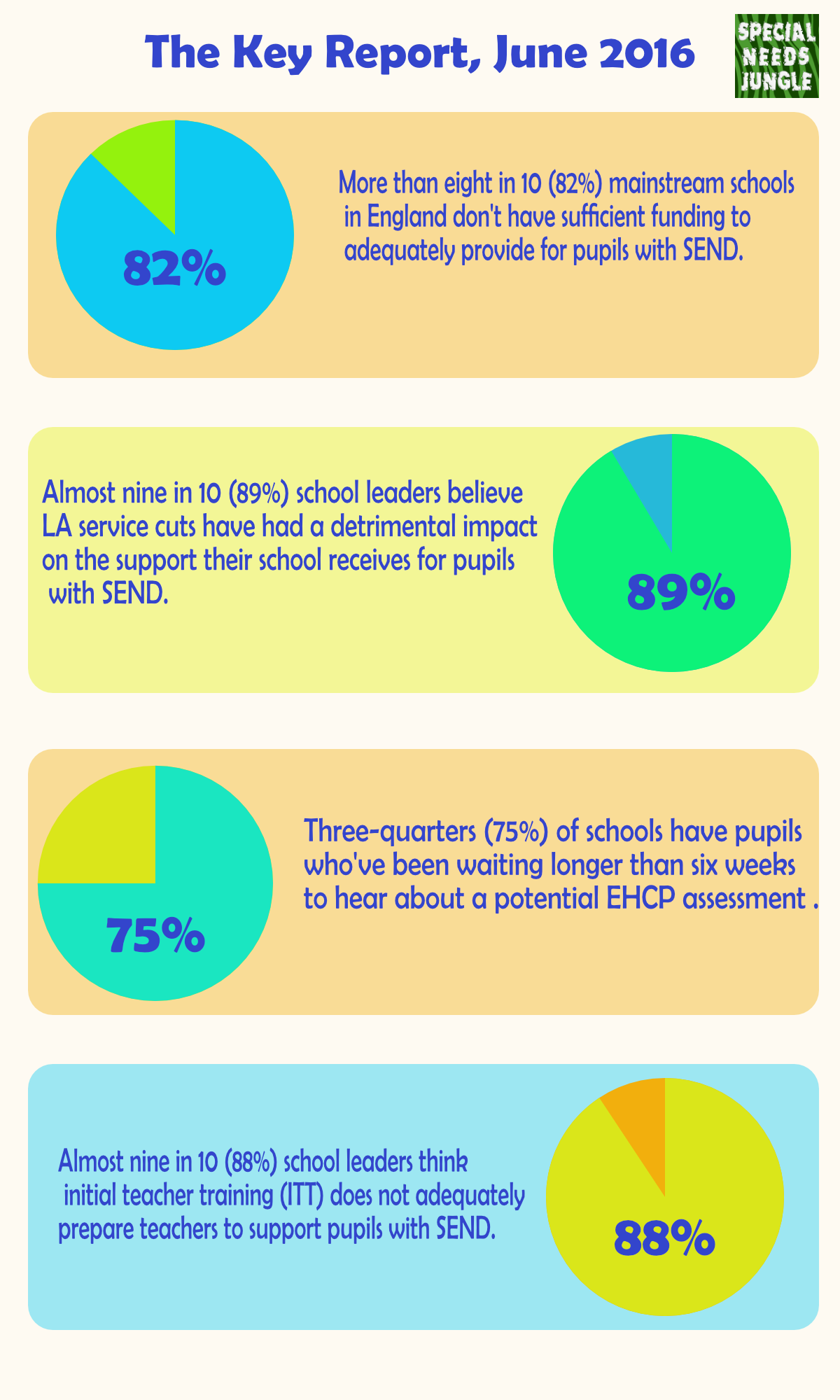 None of this is news to us - we only have to look at last week's EHCP figures to see these failings in the government's own figures. It's not even as if we didn't see it coming - what else can you expect when you rush a far-reaching piece of legislation into practice a day after the final Code of Practice is published?

Ofsted and the CQC are just starting their SEND inspection regime and most local authorities are quaking at the thought of being held to account. I know there are many people inside of LAs who are working very hard to make the reforms a success but lack of training from teachers, SENCos to SEN departments has proved to be the reforms' Achilles Heel. It does make me angry - culture change is something I've been banging on about since the start

This report, however is focusing on the other big issue - funding. There has been lots of money poured into the reforms - almost half a billion pounds, but it's the day to day matters of teaching children, especially those with lower levels of SEND, that seems to be the problem. For more on SEND funding reforms, read @AspieDeLaZouch's guide

One headteacher said: “Funding for pupils with SEN has become extremely difficult to access this academic year and this has a detrimental impact on staffing and the welfare of our pupils.”

“School funding is so stretched that schools are unable to absorb any additional staffing and funding demands for children with SEND. The direction the curriculum is taking is also becoming less and less inclusive for these children, meaning schools need to look at alternative interventions which cost money and teacher time.”        Cathy Earley, nursery headteacher

When asked if initial teacher training adequately prepares teachers to support pupils with SEND, almost nine in 10 (88%) school leaders said they don’t believe it does. They will, no doubt be pleased to hear last week's announcement that training for teaching children with autism is to become a core element of ITT. The only question is why has it taken so bloody long? If the government wants mainstream school to be inclusive and for every teacher to be a teacher of children with SEND, then they have to train teachers in how to teach every child in their class, whatever their needs. And guess what - that's going to cost more money too.
But The Key report shows that even with that, teachers are not convinced inclusion works, quoting one headteacher as saying, “Teachers cannot possibly have or expect to gain knowledge, experience and skills to cope with the many differing needs of children now coming into school”.  And as for Academy schools, well we all know what they think of children with SEND, just ask Melanie Sykes.

Delays in assessments of SEN and long waits for education, health and care plans also appear to be more prevalent for children of primary-school age. Almost eight in 10 (79%) primary schools have pupils who have been waiting longer than the expected time, alongside just over six in 10 (62%) secondary schools.
From Monday 6th June 2016, (my birthday! ?) The Key will be running a #SENDmatters campaign to raise awareness, drive positive outcomes and make a difference for children with SEND.

If you miss us on Victoria Derbyshire, it will be on iPlayer afterwards and I'll try to add the link here. Just hope you don't have a big-screen HD television - don't want to scare the kids!
Please do add your comments below.

Tell all about the smoke and mirrors processes that spend our children’s sen support funds on financial sweeteners for schools, to enable them to accommodate the work involved in Herts home grown SEND funding distribution process! Tel about government guidance and laws on funding specific statement/ehcp provision – these apply in Herts too. Tell about the multi-layers of ‘clusters’ and ‘panels’ making opaque and inconsistent decisions based not on need and actual provision already defined by what should have been a thorough assessed EHC plan ( if the LA has done it’s job properly). BUT. INSTEAD. Based on the competency… Read more »