She's running a "Thunderclap" campaign which aims to get supporters to sign up their Facebook, Twitter of Tumblr profile to send out one message on March 18 at 9:30AM GMT. The idea is that if lots of people sign up, then social media will echo with the sound of the message like a clap of thunder. 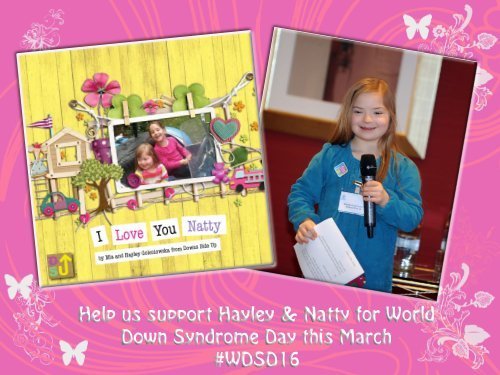 Okay, so Down's syndrome isn't exactly unknown - so why does Hayley want to raise awareness? It's really nothing to do with name recognition, it's to show the world that people with that extra chromosome are so much more than most people expect. That someone with Down's cannot be stereotyped in a one-size-fits-all box and that they all have as much talent, individuality, hopes and dreams as every other person with or without a disability.

It's about raising awareness so that medical professionals do not automatically assume a woman who discovers she is having a baby with DS will not want to proceed with the pregnancy and a much-wanted, loved child. It's about changing perceptions and changing language and terminology to avoid loaded and negative implications.

Hayley and her eldest daughter, Mia, are also offering part of the proceeds of their book about welcoming a child with Down's into the family, "I Love You Natty" to the Down's Syndrome Association.

Hayley writes: "Mia is 11 and began writing notes and poems for her sister Natty when she was around 8. One poem said 'I love you Natty and without you my life wouldn't be the same'.

Hayley knew instantly that this was the basis for a book for children, the likes of which she had sought when Natty was born with Down's syndrome.
I Love You Natty is a sibling's introduction to Down's syndrome, accompanied by bright and beautiful drawings and photos. Sold around the world, it has delighted young audiences everywhere. It touches on topics such as heart surgery, learning to sign, speech therapy and friendships, hobbies and school.

How to support Hayley

During the awareness week, 19th - 27th March 2016 I Love You Natty will also be UK P+P free and will come with a free Downs Side Up magnet (while stocks last) to celebrate World Down Syndrome Day on 21st March. To support Hayley, just click the thunderclap button below and add your social media profile.

You can also read more about a new documentary Hayley has made about her work to be shown on BBC South West.

I Love You Natty is also available via Amazon in the USA and as an eBook.