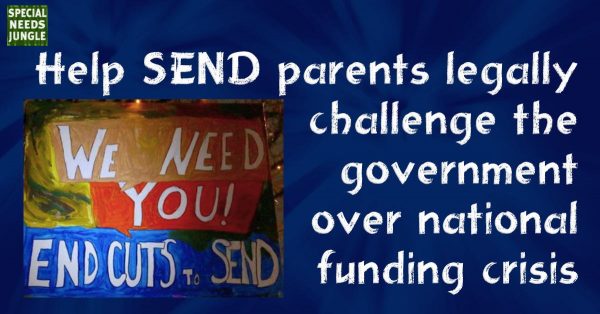 The Department for Education has been put on notice: parents have had enough of government and local authorities speaking with forked tongues. They've had it with assurances that disabled children's futures are just as important as any other child's, while the funding that makes it happen is cut or refused - or both.

Damian Hinds and Chancellor Philip Hammond: Don't mess with special needs parents. These are people who daily go into battle to ensure their children are not ignored, excluded, discarded and rejected. You may think parent carers are too hard-pressed to fight, but when it comes to protecting their children, you are wrong. Parent carers are strong and determined. And they're together, across the country. And as parents of disabled young people ourselves, SNJ stands with them.

Parent group, SEND Family Action Group yesterday launched a Crowdjustice campaign to fund a judicial review of the government's special educational needs funding policy that has created a national crisis. Local authorities are already struggling to make ends meet after years of austerity, but the SEND High Needs funding policy is leaving them without enough money to fulfil their legal obligation of providing care for pupils with a range of disabilities and conditions.

If you want to read more about how this works (or doesn't), read Matt Keer's post here.

Solicitors Simpson Millar have already led the successful Bristol judicial review about council cuts to SEND, while Irwin Mitchell are representing parents in Hackney and Surrey who are also bringing JRs against their local authorities. Surrey's hearing is 2-3 October, Hackney 31st for two days. No one from Surrey has yet met with the families, something I think is hugely misguided and I have told senior contacts in the LA this. It's not a game of chess ffs, it's children's futures and worried parents. Be human.

Within hours of yesterday's crowdfunding launch, a quarter of the money needed had been raised, a sign of the support this campaign has. We've also contributed and we hope you can too, even if just a couple of pounds.

Anne-Marie Irwin, specialist public law and human rights lawyer at Irwin Mitchell representing the families, said: “The issue of councils being able to fund specialist services is a growing problem with concern that an increasing number of local authorities are failing to meet their statutory responsibilities to disabled children. The families are concerned that local authorities are not receiving enough funding so wish to investigate whether there are legal grounds to challenge the government over its funding support. They believe that thousands of children across the UK with special educational needs are currently unable to receive the support that they need.”

Parent and campaigner from the SEND Family Action Group, Gillian Doherty told me, "Local authorities and the government are failing children with SEND due to underfunding and a lack of accountability. We can’t just sit back and let this happen any more. It’s time to make a serious commitment to upholding disabled children’s legal rights and genuinely putting families at the heart of the SEND process."

To donate to the appeal visit https://www.crowdjustice.com/case/disabled-children-vs-secretary/ 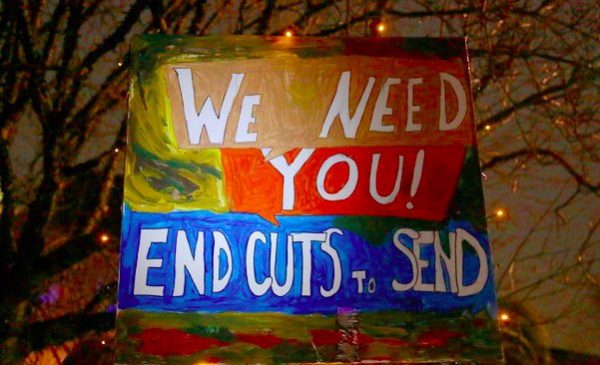 Some examples of why this action is needed

“Families can’t sit back any longer and watch this unfold. It is obvious that councils do not have enough money because of the funding they receive.”
In East Sussex, 15-year old Nico Heugh Simone, from Robertsbridge, is autistic and has anxiety and related conditions. This means he needs specialist educational care to remain in a mainstream school. When he started secondary school in September 2014, East Sussex County Council refused to fully fund his care, arguing the school should pay the shortfall out of its budget. The family took legal action and the LA was forced to relent.

This process was repeated in 2015. However, the following year the school was advised that a new scoring system would see Nico’s funding reduced even though the cost of care is the same.

Nico’s mum, Lorraine Heugh, 57, said: “Nico really enjoys school, he has lots of friends who along with the teachers have been great in helping him progress. Nico’s is at a key stage of his education and his upcoming GCSEs will go a long way to determining his life chances. He should be able to concentrate on these but instead we are once again battling for him to receive the support he needs.

“Cuts to SEND budgets are being made across the country. It has got to the point now where this is a national crisis. Nico feels strongly about helping to support other children to have access to a good quality education and for schools to be better resourced to support the children. He has close friends who have spent years out of school and their parents have repeatedly been fighting for an appropriate placement and provision so he has seen first-hand the heartache this has caused.

“Families can’t sit back any longer and watch this unfold. It is obvious that councils do not have enough money because of the funding they receive.”

In Scarborough, 14-year-old Benedict McFinnigan has been diagnosed as having post-traumatic stress disorder, anxiety, depression and chronic insomnia. Benedict has been refused an EHCP assessment by North Yorkshire County Council because the local authority said he does not meet its criteria  for having special educational needs.

He's been out of mainstream school for two years and was taught at home until he was admitted to a pupil referral unit for less than three hours a day.

His mum Kirsty, 40, a full-time carer for her children, said:  “We are trying to do the best for Benedict but we are not the experts. He deserves to be receiving the best education available like all other children. Ben was hoping with support to be able to have the opportunity to reintegrate into a mainstream school where he hoped to be able to choose his options and ultimately be able to go to university one day. His mental health has declined as he no longer feels he will have the opportunity to do so.

“Ben is at a time when he is beginning his GCSE years. His whole future and life chances are being put at stake by his current lack of support to access an equal education. It's clear that the number of children with disabilities not being able to receive the help they need is growing. If councils and head teachers across the country are telling us they don’t have enough money there is clearly a national problem. The money comes from the top with regards to the Government so we want to take our fight for change to the top.”

These families' stories will be familiar to many of you. Other families will have been through even worse. The government can no longer rely on trotting out stock phrases like they're putting 'more money than ever before' into the system. Austerity, combined with a flawed funding formula, combined with hugely expensive reforms that, council after council, have been shown to be a failure, have created a perfect storm with vulnerable children and families suffering more than they ever did under the previous system.

But, Mr Hinds, families have had enough. Do something to ease the strain today or they may force you to in court. And if that fails? There's always the ballot box.

To donate to the appeal visit https://www.crowdjustice.com/case/disabled-children-vs-secretary/

Did you watch the Panorama episode about CAMHS this week? If not, you can find it here. Be aware, it's gruelling viewing and had me in tears thinking about our own family's experience, which isn't yet over. For our privacy, I don't talk about them here.