Last week, I said Autism Awareness had graduated from a day to a week. Dear reader, I was wrong. It's a month. Look, if Ehlers Danlos syndrome, a rare disease can have a month (May), so can autism. After all, autism is anything but rare. Even I have it. And my kids. And maybe your kids. And you.

So, a month it is, which gives me the opportunity to feature today's post from the mum of a daughter with autism, Holly, who's 12. She's taken part in awareness raising of her own, as part of the National Autistic Society's Too Much Information campaign. Her mum, Jo tells us about Holly and her volunteering. 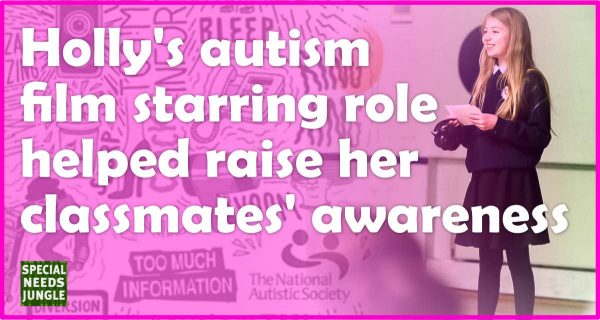 How Holly's film role educated her school about autism

When we first proposed the idea to Holly about auditioning for the National Autistic Society’s Too Much Information (TMI) campaign film, she immediately felt it would be a great way to explain and encourage people to be more understanding of autism. So we were completely delighted when Holly was invited to be the star of the film that has launched the second year of the TMI campaign.

The day we found out, Holly had just come back from a really hard day at school – she’d had a meltdown and everyone had just stared. Holly was fed up with everyone judging her for being different, so this was a great opportunity to make a change. After reading the film’s script, Holly grew even more excited, as the film focuses on the need to provide more time for autistic people to process information, which reflects her own experiences really well.

Holly had also recently decided with the support of her SENCo, to disclose her autism to her school during World Autism Awareness Week. It was perfect timing.  She was able to screen this amazing film, featuring herself, to explain meltdowns and processing time to her school in an accessible and powerful way.

As the film so accurately represents, Holly, like many autistic people, can struggle with processing information. For example, when we’re in a shop, staff will often say ‘Hi’.  Nothing wrong with that, but when there’s no response, they follow it quickly with a question like, ‘Are you off school?’  Silence leads to another question: ‘Are you doing something nice this afternoon?’ and so on. The more questions, the more overwhelmed Holly gets.  She may have been laughing and chatting when we joined the checkout queue, but her mood will be transformed by the time we leave.

Holly’s decision to stand up in front of her entire year group and be so frank and direct about her autism was a daunting prospect. As a parent, I was so hopeful that the assembly would lead to her peers knowing what makes her different and, as a result, being more accepting. At the same time, I was concerned this could give them more reason to exclude her.

On the morning of the assembly, just before Holly was about to give her speech, she had a meltdown. She became overwhelmed with anxiety about how her fellow pupils would react. We managed to calm her down and, minutes later, Holly was standing in front of 180 pupils, completely confident of who she is. Her determination to improve everyone’s understanding of autism meant that her usual shy exterior was nowhere to be seen for those five minutes. I felt so proud seeing her up there and seeing the look of awe on the faces of her teachers and peers.

During the speech, Holly talked about how autism affects her, explaining how she's different but that's OK. She talked about what she enjoys (cinema, singing, pizza, chocolate) and her difficulties too: crowds, loud noises, people talking at once, changes to routine, and others breaking the rules.

She then talked about how her classmates could help her: like giving her time to answer questions, by not staring at her if she's anxious, including her in conversations, inviting her to social events and understanding how ear defenders help her block out sound and join in during loud activities. She also said she can be direct, but this doesn't mean she's being rude.

Hopefully as a result of all her honesty, Holly can now be herself, because as she said, ‘it was exhausting trying to be someone else, trying to fit in’.

We are hopeful that this powerful TMI film and campaign will help the public accept and understand autism and learn how to make the world a more Autism friendly place.

In fact, Holly put it perfectly herself when she said: “If just one person sees the film and is more understanding of autistic people, I’ll be happy.  People can do really simple things to help autistic people, like not rushing someone to respond to a question or giving them space if they’re feeling overwhelmed or having a meltdown. Small changes can often make the biggest difference.”

After just five days, the film has already been watched over 5 million times on different platforms, so we’re sure it will make a massive difference.