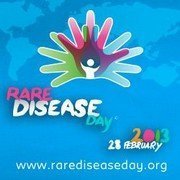 Rare Disease Day is at the end of February, with the theme 'Disorders without Borders'. In Europe it's coordinated by EURORDIS, the European Rare Diseases Organisation.

Many children have special needs because of a rare disease that may present extreme difficulties with being included in mainstream education. Many others, however, whose condition is physical and not a learning disability, simply need support to help them manage the classroom environment on a practical level.

One person such as this is Dan Copeland. I met Dan through my work with DysNet Limb Difference Network. Dan has TAR Syndrome and was only the 18th person recorded in the UK with the disorder. Despite his physical difficulties, Dan, from Liverpool, impressed me with his cheerfulness, humour and can-do attitude.

Dan, now 23, is a student and works part-time as a DJ. Below is the first part of his story, with a link through to the remainder that's hosted on the RareConnect DysNet rare disease community.

My name is Daniel Copeland and I have a very rare syndrome called TAR syndrome which is short for Thrombocytopenia with Absent Radius.

This means I have a low platelet count which causes me to bruise and bleed more frequently and when my blood count is low it causes me to catch viruses more easily than others. I also have no radius bone in my forearm, the rare thing with this is the fact in most genetic cases if the radius is not present then neither is the thumb. But with TAR there is a thumb, although the tendons and ligaments are connected to the ulna bone which causes the wrists of the affected to be turned inwards.
As so little was known about my syndrome as a child, initial diagnoses from knee and hand specialists were not good, telling my parents I would be unable to do basic things from feeding myself to dressing myself. When I was due to start nursery and primary school, the boards were trying to push my parents into sending me to a special school even though all my problems are physical and not educational.
Through my whole educational experience, fitting in was difficult when I started at a new school and college but I quickly integrated into a normal social lifestyle. There were some other disabled children in my school but not many (about six in my school year) so integration with able-bodied children was extra important so as not to become isolated...