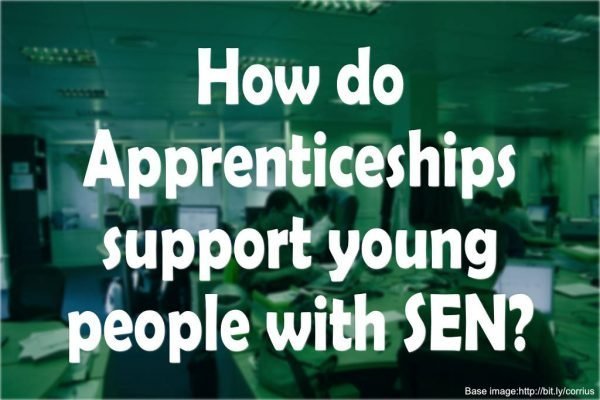 A while ago, I was searching the web for specific information about apprenticeships for young people with SEN/Disabilities for one of my sons. I couldn't find much at all about who is in charge of ensuring needs in Education, Health and Care Plans (EHCP) are met. The practical matters of where a young person is going to find an apprenticeship that can cater for their special needs is another matter.

Figures from 2012 show a significant decrease in the proportion of apprentices who declared a learning difficulty from 11.1% to 8%. This report, "Creating Inclusive Apprenticeship s" had a number of recommendations and it would be interesting to discover how many had been acted on. The report also noted that some apprentices had not disclosed their learning difficulties if they were not visible, for fear of being rejected1.

Our commitment to apprenticeships is giving people everywhere the chance to develop vital skills while working in a real job and being paid. This taskforce will focus on how apprenticeships can be more accessible to people with learning disabilities so everyone can be part of the apprenticeships success story.

There are, also, of course, Supported Internships for those aged 16-24, which are work-based, structured study programme for those with a statement, EHCP or Learning Difficulty Assessment to "achieve sustainable paid employment by equipping them with the skills they need for work, through learning in the workplace". Only, they're unpaid, unlike apprenticeships.

How do you get an apprenticeship if you have SEND?

I visited the flashy Apprenticeship website titled, "Get in, go far", but doesn't mention SEN. It's designed, obviously, for the less-is-more YouTube generation. But to apply, you're taken to the regulation gov.uk branded site where SEND is only mentioned as a field of work.

I clicked through to a number of roles. Most were admin-related, retail sales, receptionist, car technicians, hairdresser, even an apprentice accountant. If we're talking about a young person with ADHD, Asperger's or dyslexia, these roles might well be possible if they were interested, but they would still need support.

As the main flashy website and the gov.uk site were devoid of any SEND advice, I dusted off my old reporter skills and decided to find out by telephoning one of the training companies, Positive Outcomes.

Positive Outcomes is a government-funded, but independently operated training company who work as a matching service between available apprenticeships they have on their books and candidates looking for a role.

Karen Milward of Positive Outcomes was kind enough to explain how the system worked through a "dual screening" process. The first stage finds out about the applicant, their abilities, aptitudes, preferences and any additional needs (that they choose to disclose!). The company do need access to any statement or EHCP, so that they can then understand the young person's support requirements.

Their priority is to treat every learner as an equal and in fact they do not, in the first instance, tell any potential recruiter about the young person's learning disability, although they've found that the young people themselves are very open about their needs during their job interview. Karen has found employers are not put off and are keen to employ anyone with the right aptitude.

As an example, Karen explained that they'd recently placed a young person with ASD and a statement in an apprenticeship where he was now thriving.  To support him, there was a "buddy" system and a mentor at the employer who could talk through any anxieties with him. He also has a daily diary to complete which enables his progress to be monitored with the training company. This is in addition to regular "after care" meetings to monitor how the placement is progressing. Nationally recognised qualifications can be gained through either work-based or part-college based studies (depending on the training provider)

So who's responsible for the EHCP? Karen said that the employer and the training company were each responsible for aspects of it. However, I'm not sure, if it went completely pear-shaped and stated needs were not provided, how a young person could hold them legally to account. I'd like to find out more, if anyone knows as I'm pretty sure no one has tested this out so far. I'm sure that if a placement did sour, the training company would work with the employer to help sort it out, but I'm not sure what would happen if this proved untenable? And in any case, surely the local authority where the EHCP was issued is still ultimately accountable?

I asked about what kinds of special needs they could help and as you would expect, it is the more cognitively-able end, including severe dyslexia. When I asked if they could place a young person with Down's syndrome, for example, it was stressed that they look at the young person first, not their disability. Even so, it isn't possible to place everyone - it would also depend on the roles that could be sourced.  I do know that these training companies work proactively to find or create roles, as I've been called several times myself to ask if I would be able to take an apprentice on via my social media company (answer: sadly no- I don't have time to do that much myself!)

Of course, this is just one training company, though I have no reason to suspect I just was lucky enough to find the only helpful one - you tell me! When I asked what message they would like to give to the government's Taskforce it was simple: get more information out there so that young people, their families and employers can understand what apprenticeships are about and how they can work well as an alternative to post-16 education.

I'm really not sure though, how an EHCP in an apprenticeship can be legally enforceable  - an LA has no authority over an external training company or employer. (It is interesting to note however, that as Apprenticeship training firms are government-funded, there is a stick in there somewhere, if ever needed)

It does beg the question finally, that if an EHCP can be in place in this situation and the government sees no problem, what is their argument against not having EHCPs for SEND students at universities now they've slashed the Disabled Students' Allowance?