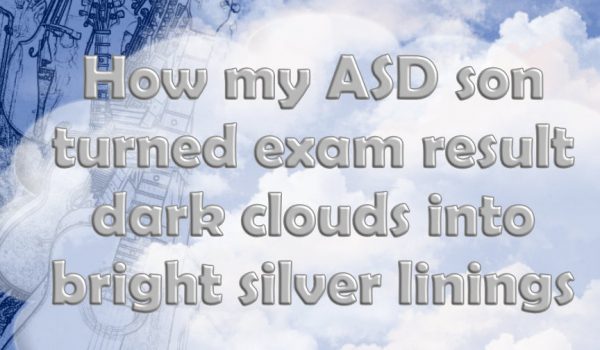 At the end of summer last year, the AS results day to be precise, we were in a bit of a pickle in our house. ASD/ADHD Son1, who had left his specialist school for mainstream sixth-form college, received some unexpected and very unwelcome AS results.

As many of you will be waiting on tenterhooks for exam results in the next month, I thought it would be worthwhile (with my sons' permission) sharing what happened, how he dealt with it and what has changed in the past year.

Despite ace-ing his GCSEs, Son1's AS results were, sadly, not what he had hoped. I had realised that the level of support he had received at his previous school, specifically tailored for each boy, would not be replicated in mainstream. However, it appeared that very little teacher support had materialised at the crucial moments for his AS exams.

Son1 had access arrangements in place, qualifying for a laptop for exams*. However, at his previous school, the teachers knew to remind boys when vital assignments or projects were due. And remind them and remind them again. They knew the pitfalls the boys often veered towards, such as not double-checking the fine detail of the brief or not making sure they had translated the brief into the work that was expected to gain those tricky GCSE marks.

At his old school, the boys were in class for revision weeks rather than being left to do it at home alone. The teachers knew that Executive Function difficulties gave the boys short attention spans and broad-brush thinking styles. Because of this, Son1 came out with 5 As and the rest Bs at GCSE. The school as a whole has an 84% A*-C pass rate from boys who either couldn't sit still, could barely read or couldn't organise their thoughts back in Year 7.

A number of things had gone wrong in the Lower Sixth at Further Education (FE) college, the culmination of which was the AS-level disaster. The Learning Support teacher I had met with before the year started had left and none of the things I had told her about my son had been passed on to the rest of the department or to teachers, so we had to start again.

Other things that contributed:

The Perfect Storm for AS Disappointment

Like the proverbial perfect storm, these four deficits all happened at the same time and the result of the results was that Son1 was unable to move on to the second year of his A-level studies. For a young man who has always been among the cleverest in class and who plays seven musical instruments, this was a very rude awakening, not to mention very upsetting.

His teachers, Learning Support tutors and, especially, his music teacher were horrified too - he had been expected to do very well. They admitted that the support had, with hindsight, not been what it should have. And, EHCP aside, Son1 comes across as a capable, independent student. And he is. He's just a capable, independent student with an Autism Spectrum Condition who doesn't understand his own limitations and needs.

I also suspected that some of his tutors hadn't read his support needs information very closely and I had felt rather fobbed off at parents' evenings when I mentioned them. All through the year, when I had checked he was getting support, I had been assured that they understood his needs. However, it did not seem that support happened at ground level. Additionally, given Son1's new found freedom, he did not want to feel like a special needs student and so, despite his LDA/EHCP explaining all this, they chose to take things at face value.

It was also a shock for me too, having spent the last seven years knowing that he was being kept a close eye on. When he first started at Sixth form, I was left feeling once again like the 'pushy mum' who says her child has special needs but no one really believes you and just wishes you would go away. I think, in retrospect, this is not how I was seen by staff, but they have the difficult task of supporting growing independence while simultaneously trying to put needed SEND support in place for a student who is reluctant to take advantage of it.

To make matters more worrying, Youngest was also about to start at the same college the following month, having decided he also wanted to spread his wings outside of the nurturing confines of the same specialist school. Gulp. I was determined the same outcome would not await him too.

We asked for re-marks of course - in one subject it wasn't just his mark, it was the entire cohort that ended up with dreadful results in one specific module, so this could surely have only been down to poor marking or teaching errors. He also re-sat a module in Music last May and we will find out the result this August because November resits are no longer allowed. (**August 2016 update: He passed! And now has an extra AS level, so it was worth the resit**)

But this didn't solve the urgent problem of what to do in September 2015.

What happened next is a testament to Son1's resilience. Through the year he had become more interested in the performing side of music and drama and had spent the summer studying Musical Theatre and Dance at summer school.

Faced with his poor AS results, he took lemons and made sweet lemonade, restarting the year on a new course, the Extended Level 3 B-Tec in Performing Arts. This summer, he has ended up with Distinction grades at the end of his first year and will be applying to study Musical Theatre in 2017. He's also just played a brilliant run of performances in the role of Thénardier in Les Miserables with Surrey Youth Music Theatre.

For Youngest, new to FE, it has been a tricky year. Fresh out of school with a clutch of nine A*-B results, he tentatively began a similar B-TEC in Creative Media Production. The first term was very wobbly, veering between staying and dropping out right up to Christmas. The second term was more stable as relationships developed and this summer he's also ended up also with Distinction level results.

What changed for Son1 was that he ended up on a course he was genuinely excited about. He's worked really hard and improved his performing skills steadily. He's ENJOYED it. Loved it. Dedicated himself to it. For him, this has made the biggest difference. And no exams.

I truly couldn't have asked for better support from all of them in the last year and I thank them so much for this.

The other big difference was the course. With AS/A Levels in a large college, there is less possibility for the teachers to get to know the young people and the if form tutor is not on top of things or communicative, it's easy to let problems arise. With an Extended BTEC, the course tutors are there all the time and they get to know the young people much better. For boys like mine, who came from a small, close knit school, it has made a big difference.

If your son or daughter is moving to a mainstream sixth form/FE, I would advise that you do make sure you build up a good relationship with everyone who teaches or supports your son or daughter, especially the vitally important Learning Support department.

Next year it's University (and Drama school) application time - and this presents even more challenges. I'll let you know how it goes.

***Also a moment to say Happy Birthday to Youngest, 17 today... always seems a long time coming when you're summer born.!***

* At the end of August, Bren Prendergast will have a post about Access Arrangements to get you ready for the next school or college year. Don't miss it!