Since my son’s diagnosis of ADHD back in 2008, I have noticed that it is one of those conditions that seems to send what would normally be balanced, sensible individuals, into a frenzy of facts, advice and information about the condition.

I was simply amazed at how knowledgeable everybody was about this so-called, "invisible disability"! They were telling me how to parent my child, how all children behave that way, why I should or should not medicate and how, if I just said ‘no’ more to him, restricted his diet and implemented more consequences then everything would be sorted. I reached a very low point where I didn’t mention it unless I knew that I would be listened to and I know my experience is not that unique.

Ed was diagnosed with ADHD when he was almost 10 years old, although we had been attending appointments at our local Child and Adult Mental Health Service (CAMHS) for more than six months prior to the actual diagnosis. His diagnosis date coincided with the revised National Institute of Care Excellence (NICE) guidelines for the condition and the guidelines were, for me at the time, essential to help me with deciding what, if any, treatments we were going to try. (It is also worth noting that some of the treatments suggested in the NICE guidelines are not available on the NHS or through CAMHS in many areas!)

Each family's choice is individual to their child’s and family's needs and we initially opted to try parenting courses, together with dietary intervention including fish oil supplements and reducing processed food and drinks. While these things did help to some extent, it was not significant enough to help my son engage with his education.

There were many reasons for this, including Ed's inability to focus, but it was also in part down to a minority of his teachers not understanding ADHD and not being willing to try to understand the condition.

For a while we, with Ed's agreement, trialled some ritalin based medication and while it really did help with the concentration, the side effects were too much for Ed to cope with and we stopped it.  It was like being between a rock and a hard place

Ed is a very astute boy and also very sensitive, but this sensitivity is often camouflaged.  He had some awful experiences at primary school, particularly around scapegoating and being blamed unnecessarily. At one time he was blamed when he fell over the side of a hill on a school trip (luckily saved by a tree) and barred from school trips, when, in reality, it was lack of appropriate supervision that was the root cause (he was a 10 year old boy!). So it’s camouflaged because if Ed’s experience of you (especially if you work in education or health) has been negative, his default position is not to trust you. That’s a big problem when you have ADHD!

However, the professionals who did listen built the most amazing rapport and relationship with Ed and this really helped him stay engaged with education during his primary years. Sadly, the ones who refused to listen and understand were the ones that contributed to Ed’s long-term difficulties engaging with school - The brain is pre-programmed to recall negative situations more readily than positive ones). So much so, that, despite the great team of teachers that are now available to Ed, he cannot engage in the school environment and has now effectively been out of school now for almost two and a half years. 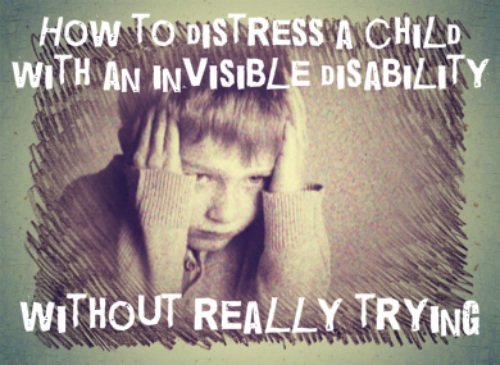 So what would have helped us and helped Ed?

Yep, that’s it! A good, positive one of course. But what does good look like? This will be different for different people so the key to discovering this is to listen, without any preconceived ideas) and discuss. There is no room for judging. If you really do disagree with what you are being told, gently check out with the parent what you have heard. It might be that you both have a different take on something. If this is the case then clarification is imperative to a good working/teaching relationship Most people can accept an off day or a bad mood if your general everyday attitude is good. This is true for our experience. It was others' misconceptions about ADHD that was so often the problem. These ranged from thoughtless comments to just plain rudeness and many left us open mouthed in shock!

What I would suggest is that before you comment about ADHD (or any disability for that matter) is that you think first, then speak. It’s really that simple: Is what you are about to say from a researched and educated source, or is it from something you just heard or an opinion you were brought up with (and we all have a lot of those).

If you are unsure, look it up, it’s not so hard these days with Dr Google at your fingertips, just be sure that you have used a reliable source such as an official site for the condition you are researching. Addiss or Understood for ADHD and attention difficulties have a good source of information.

Did you really just say that?

We had an very popular post on SNJ recently about some of the things that people have had said to them ‘Did you really just say that?’ so I thought I would offer a few of ours together with the replies I now know I would be able to say to people. At first I would either say nothing or would become defensive (after all they were commenting about my child and we all know what a lioness is like with her cubs!).

"They diagnose most kids with that these days, don’t they?"

No, they don’t, the NHS Choices website details that between two and five percent of school age children in the UK are diagnosed with ADHD – That means that between 95% and 98% of children are not!

"If only he could concentrate."

We heard this at every parents' evening we attended and saw it on every end-of-year report. At first, I felt annoyed by the comments, but with time I learned that just because the teacher didn’t understand the complexities of the condition, it didn’t meant that we had to listen to this over again without comment. My response became ‘Yes, we feel that too, It's so very hard for him that he can’t. What we need to focus on is support to optimise ways for him to plan and remember’.

"ADHD is not a disability!"

Ed was told this by a professional and the upset it caused was enormous, so to avoid any future misunderstandings we now politely advise any doubting professionals that ADHD is included in the Equality act 2010

Poor planning and memory problems have been devastating for Edward, especially where his primary educational experiences are involved and I believe this is the root cause of his school refusal now!

"ADHD didn’t exist in my day, kids had discipline."

Well, actually ADHD-like symptoms have been recognised since the late 1700s, with the condition itself being further recognised in the early 1900s, so it has been around for quite a while!

"He has to learn to try harder."

If the professionals around Ed knew just how hard he was trying they would never ever had uttered those words!  It was soul destroying and incredibly hurtful for us too.  He can only learn what he is taught, if you cannot recognise and utilise his strengths to teach him, then he will not learn. There is a saying, ‘If you have tried to teach a child something 100 times and they have not learned it, change the way you are teaching it’.

"He has to stop himself being distracted by other students."

That’s a bit like saying, ‘You have to use the steps to access this building in a wheelchair. Because ADHD is a recognised disability, reasonable adjustments can be made to help the child in the classroom. Have a search online to see what you think might help your child. We brought in many thing to our son's school as they refused to allow him the support he needed (a wobble-board, timers, visual displays), although many other schools are a lot more cooperative than my son's primary school was!

This has been our most recent comment at our most recent CAMHS appointment and one I challenged at the time, only to be met with a rigidity of opinion but no evidence.  For politeness' sake, we agreed to disagree but I was seething, especially as the doctor said this in front of my son.  While the symptoms of ADHD change as a person goes through adolescence and matures, the planning and executive functioning difficulties associated with ADHD often exist into adulthood.  The diagnosis of adult ADHD is increasing, although is still under researched and by the age of 25, an estimated 15% of people diagnosed with ADHD as children still have a full range of symptoms, and 65% still have some symptoms that affect their daily lives (NHS.co.uk)

It's been an exhausting time for us and for many of you parents and carers too, so I hope this little compilation helps with the navigation of your family's ADHD Journey.

I could add many more jaw-dropping moments, but what I would really like to know is: What have your experiences been with professionals over your child's ‘invisible disability’ and how you have dealt with it? If you've arrived via Facebook, please also leave any comments here on the post itself to avoid them getting lost on the Facebook page.