Back in 2012, we ran a parent story about her son's difficulties, "When the words move by themselves – it could be Visual Stress." It's also known as Irlen syndrome and it can affect many areas such as academic and work performance, behaviour and attention and it can also cause fatigue and headaches among other symptoms. It's not a problem with the person's eyes, but originates in the brain. Coloured filters or lenses can often help.

Today we have an article from a professional's viewpoint about Irlen syndrome. Juanetta Edwards is a Senior Irlen Screener who has vast experience with the condition. We hope you find it useful to read and share. 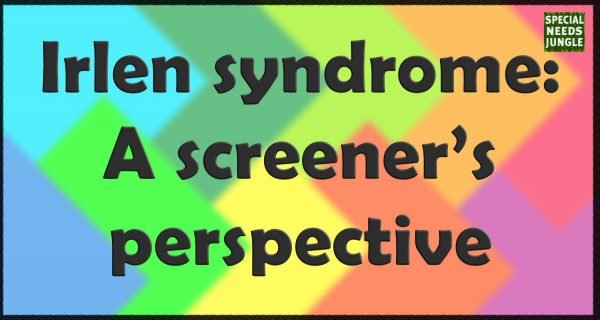 What is Irlen Syndrome?

My name is Juanetta Edwards and I have been screening for 16 years in the Kent area.  I have Irlen syndrome and am passionate about raising awareness of this disorder.

Over 20 years ago, Helen Irlen, an American psychologist, began to study children and adults with learning disabilities and discovered a significant improvement in their reading ability when the page was covered with coloured acetate sheets.  This lead to the discovery of a disorder involving the brain’s inability to process visual information- what is now known as Irlen syndrome.  There are now 170 clinics worldwide.

I have an appointment to screen a 12 year old boy who has struggled in school his entire life; he’s intelligent and knows almost everything there is to know on the subject of ancient Egypt.  He was diagnosed with autism at age six, but despite every intervention, he refuses to go to school. He has friends and is well liked despite his social anxieties, but this child has daily meltdowns at the thought of going into the school building. It was only when his mother, desperate to help her son, posted on a special needs forum about her son’s difficulties that another mother mentioned Irlen Syndrome.  After reading through the list of symptoms on the internet, she said, “it was like they had described my son”.

This is something that I hear of frequently; children who cannot cope in the school environment.  Bright fluorescent lights dazzle them to distraction, white walls and paper give them unbearable headaches, the words on the smartboards swim about making it impossible to copy down information. Playtime is no easier. Bright sunshine is blinding and distorts the play equipment, depth perception issues cause a child to have frequent accidents and appear clumsy. At its worst, Irlen can make outdoor physical activity impossible when games like tag and catch become a source of dread.

Of course, this is only a small part of Irlen syndrome. Mostly, I screen children and adults who have difficulty reading; often Irlen will co-exist with dyslexia or dysgraphia but not always.  Symptoms include eye strain, print distortion, headaches, difficulty following words on a page and consequently this leads to poor concentration, low self- esteem and a short attention span.

I also screen many children on the ASD spectrum, often when all attempts to remedy the sensory processing issues have failed; because treating the autism isn’t the answer.

Misdiagnosis is also becoming more commonplace; children diagnosed with mild ASD are actually suffering with this little known perceptual processing disorder called Irlen syndrome.  Alternatively, a child may simply baffle healthcare professionals; one such child was 6 year old Thomas.  Thomas was screened after teachers at his school were concerned that he was completely detached, he was unable to communicate with his peers and his mother, Elloise, described him as ‘being completely in his own world’ and ‘not the boy she knew he was inside’.  Thomas was so transformed after wearing Irlen spectral filters in his glasses, that his mother wrote a book entitled, ‘[amazon_textlink asin='099312920X' text='Thomas’s Journey with Irlen’' template='ProductLink' store='specialndsjungl-21' marketplace='UK' link_id='3bc57844-49fd-11e7-aa6b-b5c09c5b1b74'] by Elloise Scott.

Screening is a fairly straightforward process, it can often be done within the school or at home, wherever the child feels most comfortable. It takes around and hour and a half and involves identifying if and how the child (or adult) is affected and to provide a coloured overlay (or combination of overlays) to assist with reading. A report is also usually supplied.

The second stage is referral to an Irlen diagnostician who will assess the child for Irlen spectral filters – a special Irlen laboratory will coat prescription or non-prescription lenses to be worn in spectacles.  Contact lenses are also available.

It is important to note that the eyes must be tested before the Irlen screening to check vision first.

Watch this sample distortion to experience Irlen Syndrome for yourself. This video is from the Irlen syndrome website

Follow me:
Marguerite Haye
Head of SEND at Sunshine Support
Marguerite Haye joined us as a columnist toward the end of 2015. She's knowledgeable in SEND legislation and embraces its ethos at the heart of everything she does, by adopting a child-centred approach to ensure every child receives the right provision. I have been involved in teaching for over 15 years in various positions and sectors, including being Head Teacher at a Specialist School for Autistic children and young people.
Marguerite can recognise individual learning abilities and uses her initiative to tailor learning programs to meet individual need.
Through effective leadership, Marguerite promotes an appropriate culture, empowers staff and demonstrates high standards.
Marguerite has built connections with parents, young people and professionals alike in her career
Follow me:
Latest posts by Marguerite Haye (see all)

“Misdiagnosis is also becoming more commonplace; children diagnosed with mild ASD are actually suffering with this little known perceptual processing disorder called Irlen syndrome.” I’d like to know on what basis this statement is made. ASD frequently comes with co-morbidities, including ADD/ADHD, dyslexia, dyspraxia etc. Many autistics also have a sensory processing disorder and Meares-Irlen/Scotopic Sensitivity Syndrome is likely to exist as part of an overall SPD in an autistic individual. It’s very dangerous and I believe wholly inaccurate, to state that some autistics (with the implication that it’s also common) are misdiagnosed when they are not autistic and have… Read more »