I don't think anyone is unaware of the word 'autism' these days. The problem still lies in understanding how vast a spectrum it is and how to adequately provide for that, especially in these austere times.

The National Autistic Society's theme for Autism Awareness Week (it's been promoted from just an awareness day) is "Until Everyone Understands". I think, given the breadth of presentations of what autism "looks" like, this could be a fairly tall order. 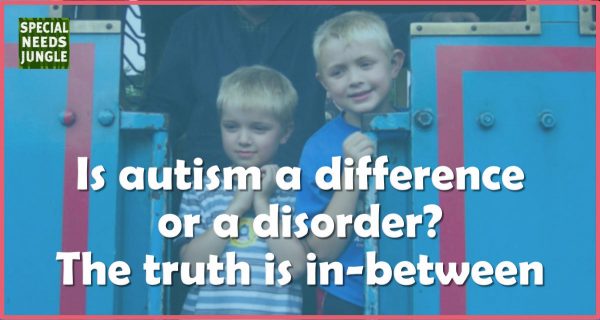 In the UK, the prevalence of autism is 1 in 100 while in the US, the Center for Disease Control (CDC) estimates the figure as high as 1 in 68. Is it getting more common or just being diagnosed more frequently? Or a mix of both? Will there, in fact, come a day in the future when there are almost as many people on the spectrum than not?

If that's the case, then there may well be a time when everyone does understand autism because there will be someone in everyone's family with ASD. Or more than one person, given its genetic component. Even today, if there is one person in the family with a diagnosis, there is very likely to be another on the way to diagnosis or an adult who clearly displays many autistic traits.

So, as the question in this article asks, will autism (of the Asperger's variety), be seen as a disorder or a difference? In this article by psychology expert, Dr Ellie Dommett, about a debate over the same issue, it was argued that it was, "more than a debate over semantics and is, in fact, critical in enabling access support services."

Social and Medical Models of Disability

In the social model of disability, it is society that disables people and so should be changed to accommodate everyone. However, the medical model dictates that the impairments caused by autism disable the individual. Or is it that, in autism, the truth lies in between? One must change society both physically and by education, but also support those people who require assistance with difficulties such as anxiety, poor coordination, lack of organisational skills and so on. And even more so for those whose communication and basic skills are severely limited.

In Dr Dommett's article, autism expert Prof. Simon Baron Cohen, went on to argue that those with high-functioning autism and Asperger’s Syndrome, will have disabling social deficits, but also key attributes, which may be advantageous. These include intense attention to detail and an ability to develop a deep level of knowledge on a topic of interest. Indeed, some companies, including Microsoft, are using this to their advantage.

But to get to a place where they can be employed, young people need to have a suitable education. While some can "get through" mainstream education, though often feeling like misfits or being bullied by "normal" kids, others - perhaps a larger number - will not thrive in any way in mainstream education at present.

So where do they go? Too capable for special school, they must endure the social agonies of mainstream to get the qualifications they need. Or, if they are very lucky, live in the right place, or have determined parents, they may get to go to a specialist school of which there are very few.

What's needed for understanding in schools?

As you may know, my sons were lucky, lived in the right place and had determined parents. They went to a brilliant school which is only for boys and is heavily oversubscribed. The easiest way to get in is to do it early, when your son is in junior school. My boys chose to go back into mainstream for sixth-form and they did not find it easy after having a protective environment in their secondary years. However, my younger son had a lot of good support on his Digital Media Extended BTEC and has received FOUR offers from universities for September (His brother is heading the same way, but is still thinking about his path).

Many young people like them are not so lucky. More schools are opening autism units, but again, where on the spectrum are the units aimed at? If we want truly inclusive schools where children with autism can be happy as well as receive a good education, then schools MUST adopt the social model of disability as well as paying heed to the inherent physical deficits I've already mentioned.

For example, including quiet areas where children can opt to be - if they wish - instead of enduring the torment of break times. Trained teachers who can differentiate in their sleep. Staff who can spot when their autistic pupil is in danger of becoming overwhelmed and have steps in place to help. Schools who want to work compassionately with parents, including them when the draw up provision on SEN Support. Then, if it becomes apparent that the child needs more expensive support, help them secure it, funded by an Education, Health and Care Plan.

We need schools that include all pupils' learning styles in the lesson plan, not just the majority. And while an autism unit will work for some, you can't hope to be able to cater for all types of autism in one unit. I'd love to hear from a school with a unit -or any other school - about their best practice.

It's a bit ironic that poor communication by schools and LAs is one of the biggest barriers to helping children with a communication disorder.

In schools, the leadership should communicate to everyone that pupils with autism must be enabled to participate and enjoy their school lives, whatever that takes. Often it's not money, fortunately, it's attitude and culture, which costs nothing (except training, where needed).

Encourage home-school communication so the teacher knows if the child has had a bad night or if something disruptive is happening at home such as an illness, death or breakup in the family. Use an app such as Class Dojo to communicate with parents. It's free for the basic app, which may be all that's needed.

In the debate detailed in the article, Baron-Cohen is quoted as saying it was more useful to focus on the strengths that autism (Aspergers) can endow, rather than just its weaknesses. I recommend this; telling a child they're good at something when they hear so much negativity about what they struggle with, is very important.

Baron Cohen suggested, says Dr Dommett's article, that everyone falls on a continuum for autistic traits, it's just that those with a diagnosis usually have more of them.

"He even proposed that it is not the score that determines diagnosis but rather the environment, with some people finding themselves in a more supportive environment not needing help or diagnosis, whilst others greatly need the diagnosis to access support services."

And that's the point entirely - while lots of people have one or two traits, they can manage and thrive in modern society and are not "autistic". More than a certain number of traits and the environment usually becomes disabling. And that's before any other of their potential physical/medical difficulties are considered in the mix.

He is, I think, right to say that both approaches of disability and difference are needed. Your views are welcome in the comments here on the blog.

Article 2: Autism: A Difference of disorder? Implications for access to services by Dr Ellie Dommett. Published in Science in Parliament Vol 68, No 1 Spring 2011. Accessed on 28/3/17 on Baroness Susan Greenfield's website.