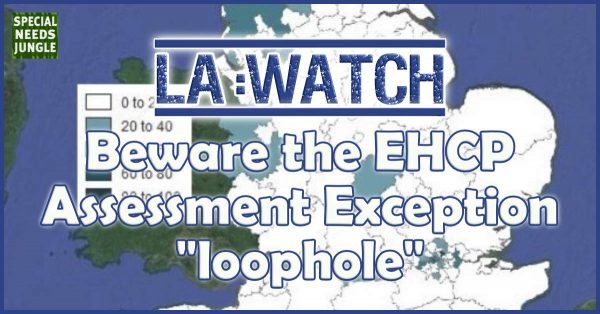 It’s the last week of the year in most English schools. A week to take things a bit easier, tidy away, and prepare for what the next academic year brings. But it’s also a week where a loophole opens up in the SEND system; a loophole that a fair number of local authority SEN services appear to be exploiting.

The introduction of Education, Health & Care Plans (EHCPs) in September 2014 was one of the biggest recent changes wrought to the SEND system. Many seasoned SNJ readers will know how the EHCP process is supposed to work – check the flow charts on this site if you’re not sure.

The timescales are laid out in the 2014 SEND Regulations, and they’re pretty clear. Once a request for assessment has gone in, and if it’s determined that a child or young person needs an EHCP, local authorities then have a statutory duty to finalise and issue the EHCP within 20 weeks of the start of the process.

The SEND Regulations list several situations where LAs “need not apply” the 20-week deadline to get an EHCP finalised if it is “impractical” to do so. These situations - broadly known as “exception cases” - are as follows:

The first two exception cases could happen at any time. The third one kicked in this week for most English schools.

The LA decides when to apply the exception case to an EHCP, and therefore they get to decide when they don’t need to apply by the 20-week deadline. The SEND Regulations don’t offer any more direction than that - but the SEND Code of Practice says LAs should tell parents and young people when they are applying an exception case, and that they should aim to keep delays to a minimum.

How "exceptional" are the exception cases?

These exception cases are supposed to be just that – exceptional. There are bound to be cases where they are necessary: a personal disaster hitting the family, for example. It’s also possible that LA SEN teams will sometimes only get a chance to ask schools for EHCP advice in the last week of the school year, or during the summer holiday. That doesn’t strike me as great practice, but there might be times where it’s unavoidable.

But either way, this is a loophole. A narrow loophole, but it’s there. Are LAs using it, and are some of them abusing it?

Unsurprisingly, the answer is yes to both.

According to data from the Department of Education, last year local authorities chose to classify 5,077 of their new EHCPs as “exception cases” – roughly one in every seven new EHCPs finalised last year. That’s over 5,000 cases where the 20-week deadline didn’t apply.

And as always seems to be the case with SEND, there’s a definite postcode lottery in play.

Most LAs seem to be using this loophole responsibly. Most applied it to less than 7% of their caseload - which is a reasonable proportion, given the exception case situations laid out in the SEND Regulations. Many LAs don’t make use of the loophole at all.

However, a significant minority of LAs are making use of this loophole on an implausibly extravagant scale. For these LAs, it’s hard to see how they are treating these “exception cases” as exceptional:

You can find out who these LAs are at the end of this article in tables and below in these maps. The LAs are scattered across the country, but they seem to be particularly concentrated in London and the North-West. Between them, this bunch accounted for over 3,500 of England’s 5,077 EHCP exception cases last year. Many of these LAs are clearly abusing the exception case loophole. Why? 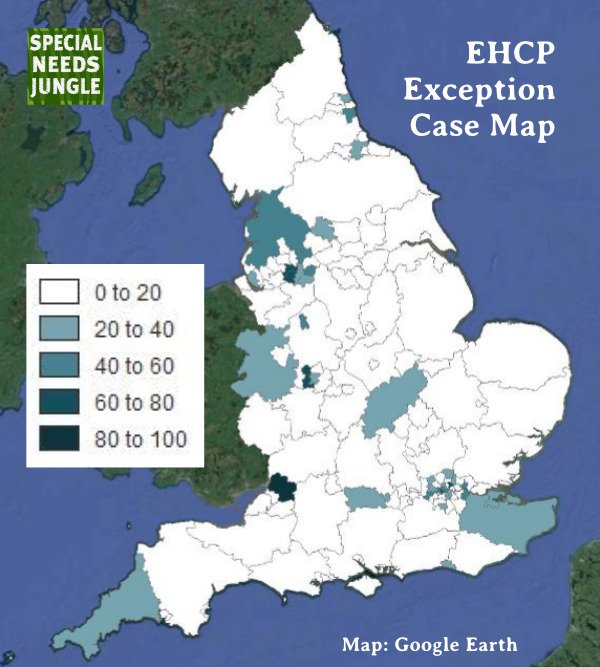 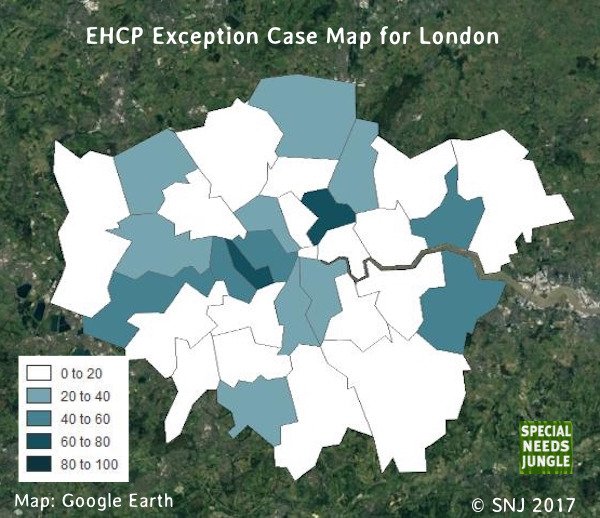 Why use the loophole?

The main benefit of this loophole to an LA is obvious – it frees them from the statutory 20-week deadline to get the EHCP finalised. Most LAs are struggling to meet the deadline and have been since the SEND reforms kicked in nearly three years ago. It looks like some LAs are choosing to relieve this deadline pressure by abusing the exception case loophole.

But there’s another reason why this exception case loophole is so attractive – it allows unscrupulous LAs to game their performance data.

External agencies – Ofsted / CQC local area SEND inspectors, the Department for Education, and others – are looking at how effectively LAs are implementing the SEND reforms. One of the things they look at is how many EHCPs get produced on time. But they mostly seem to be assessing LA performance with EHCP timeliness using figures that don’t include the exception cases.

That provides a strong temptation for LAs to game the statistics by shoving more of their EHCP caseload into the exception case category, in the hope that no-one will pick up on it. We also know, incidentally, of cases where LAs finalise an unfinished plan to meet the deadline and then put it straight back into draft.

Most of the 40 LAs that made extravagant use of the exception case loophole last year got a distinct boost to their EHCP performance data by using this tactic. And up until now, it’s been effective; some Ofsted & CQC inspectors have been fooled by this statistical sleight of hand, praising improvements that aren’t really happening.

But inspectors are now wise to this game, and they will be watching the use of this loophole much more closely from now onwards. And so will we, and hopefully, so will you and the DfE.

A lot of what you’ve just read is pretty arcane. But there are clear practical consequences for children and young people with SEND, and for their families. Each year, thousands of EHCP cases are being quietly disapplied from the statutory 20-week deadline. Some of these cases will be genuine exceptions, where a decision has been taken in the best interests of the child. Most, though, will not – particularly in those LAs that are making rampant use of this exception case loophole.

It’s hard enough for families to get a lawful EHCP for their child on time. There are cases where families have been waiting over a year for their child’s EHCP to be finalised. Abuse of this loophole simply makes that task even harder, and thousands of children and young people are affected by it.

The SEND Code of Practice says that LAs should inform families when they use the exception cases – but I have seen no evidence that this is happening, and neither have other parents who keep a close eye on the system. Most families hit by this probably have no idea that their child’s EHCP has even been classed as an exception case.

Abuse of the loophole means that kids often cannot secure the statutory SEND provision they need at a time when they need it most. The loophole cases also have an impact on the family’s right to appeal. Families cannot appeal to SENDIST until the EHCP is finalised – and when this loophole is used, the timeframe for finalising an EHCP is potentially open-ended. There are also likely to be serious practical and financial consequences for many schools and nurseries if thousands of EHCPs have been wrongly classified as exception cases and take longer to enter force.

What can we do?

If your child is getting an EHCP for the first time, and if it’s not arrived by the statutory 20-week deadline, then ask your local authority SEND team whether they have applied the exception case criteria laid out in the SEND Regulations.

If the LA refuses to answer - or if the exception case they have used is wrong - then inform Ofsted / CQC local area SEND inspectors, and inform the Department for Education – get in touch if you need email addresses to make this happen. They will not be able to resolve the case for you, but it gives them evidence to pursue enquiries.

If the evidence is clear that your LA is deliberately misapplying the exception case criteria to your child’s EHCP, you might also want to consider getting legal advice.

The table below includes local authorities that classified more than 20% of their new EHCPs as exception cases in 2016. Most LAs classified fewer than 7% as exception cases last year. You can find data for all LAs displayed on a map here – or as a kml file to download and open in Google Earth here. You can also see the data we have used here

Has this happened to you? Tell us your experiences BELOW, in the comments (rather than just on Facebook) so your comments stay with the post - this is very important so the powers that be can see your experiences!