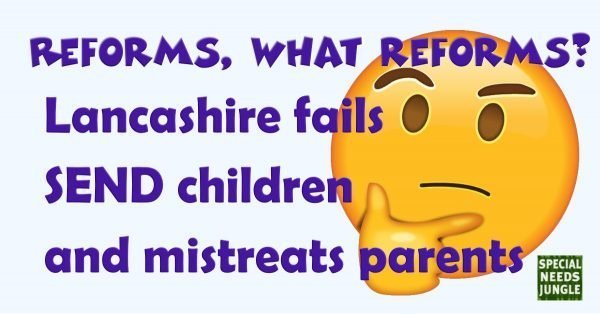 Just over a year ago, I wrote about the dreadful SEND inspection report for Surrey from Ofsted/CQC, as part of the SEND reforms accountability measures. Since then quite a number of local authorities have been given detention from Ofsted/CQC, in the form of being told to write a Written Statement of Action (kind of like writing lines, but meaningful) outlining how they plan to improve. This week, almost as if none of that had happened as a warning, Lancashire County Council not only got spanked, but given a caning and temporarily excluded in its own SEND inspection report. I mean, what have they been doing for the last 3.5 years?

Unlike Surrey, I have no deep knowledge of Lancashire, other than growing up in a small village called Walshaw between the ages of three to nine, so I've spoken to parent carers in the county to get a better picture. I'm told that around 100 parents turned up to the Ofsted/CQC open meeting for parents for the inspection and I'm sure many more had their say at the webinar last November. Lancastrians are plain-speaking, tell it like it is folk. And tell it, they did. As a result, the inspection team had a lot to work with and were not hoodwinked by LA platitudes and 'truth economies'.

We know from Matt Keer's research in his Transfer to EHCP post earlier in the week, that Lancashire is way off meeting the deadline of March 31st for moving all children over from statements. Matt estimates that it will take them until at least July and, at this point, I wouldn't hold my breath that they're going to be any good, either.

The bad and the ugly

So, let's give you a few quotes from the report's main findings.

So basically, Lancashire's SEND provision sucks. The whole point of the reforms was to put children and families at the heart of the process and work together so that their voices are heard.

"During the inspection, it became clear to leaders that much work, tenacity and purpose are needed to regain the trust of parents and carers and to put them, children and young people at the heart of the SEND reforms." Ofsted/CQC SEND inspection report for Lancashire, 2018

It’s also systemic: It’s not just those in the SEND departments, who often bear the brunt of parental complaints, this lack of prioritising for disabled children and young people extends to councillors and leaders across health, education and social care.

So what does the LA do? Does it APOLOGISE? OF COURSE NOT! Instead, it issues a statement that in no way conveys the seriousness of Ofsted's findings. It described the report as of "significant concern" and then goes on to list the (very short) list of positive aspects of the report, including the IAS (parent partnership) service which is an "arm's length service, not directly run by the LA anyway so they can hardly take credit for it.

So tell me what else (apart from an apology) is missing from this paragraph from LCC's response:

"As you would expect, this is of significant concern to us as a local area and we will now apply the same rigour and disciplined approach that has supported us in delivering improvement following previous inspections. The local area strategic partnership, including school leaders, will be working with Ofsted, CQC and the Department for Education (DfE) to deliver a SEND action plan to address the issues identified by the inspectors."

Did you spot the missing component? PARENTS. Among the action points they have already taken, LCC claim to have already set up a 'SEND partnership board that includes representatives from parents and young people' to help improve matters. However, I have spoken to three parents who have current or past involvement and none have heard of this or have any idea which parents LCC are talking about. Just the fact that they are only now setting up a SEND Partnership Board, 3.5 years after the reforms became law, is astonishing. And, according to all I have spoken to, it's LCC's fault that there is currently no fully-functioning, independent, Parent Carer Forum.

What happened to strategic engagement with parents?

There was a parent carer forum in Lancashire once upon a time. It was funded and run by the local authority who was firmly in control and knew everything the volunteer parents did. The parents, quite rightly, decided they should be independent and duly separated themselves from the LA. The LA, however, wasn't happy about no longer being in control and, I am told, would no longer work with this new, county-wide, independent PCF, leaving the parent carer members exhausted and stressed. There's little point being a strategic partner if you're the only one at the table. As a result, the PCF fell apart.

Now, what LCC bills as PCFs are, in fact, 12 satellite (Lancashire covers a wide geographical area) parent groups, run by council officers. Of course, these groups do not provide any challenge or strategic partnership to the LA and are, effectively, just coffee mornings.

Nevertheless, some Lancashire parents are in the process of constituting another new independent Parent Carer Forum, but this is still at an early stage. I'm sure they would welcome your involvement if you're a Lancashire parent carer.  They're not happy with the council response but are willing to work with them to try to improve things:

Parents are not surprised by the results of the Ofsted inspection and very disappointed by the L.A 's response.
Please do not make these issues political. This is about how our children have been let down time and time again. The inspection shows only a snapshot of the issues between 13th and 17th of November that families continue to face on a daily basis. Parents are yet to see any positive changes.
It is now time for you to look in depth at that report, listen to parents and work in co-production to make our children's lives better.

The LA that gaslights parents

Gaslighting is a form of manipulation that seeks to sow seeds of doubt in a targeted individual or in members of a targeted group, hoping to make them question their own memory, perception, and sanity. Using persistent denial, misdirection, contradiction, and lying, it attempts to destabilize the target and delegitimize the target's belief. Source: Wikipedia

Lancashire mum, Christine Anderson's 15-year-old son, Christopher, has complex needs including spina bifida. We both spoke on the BBC Radio Lancashire breakfast show (at 2h23m in) on Wednesday. Christopher's EHCP transfer started a year late in autumn 2016, just as he lost his SEND transport and as he was about to undergo major surgery. Now, just six months before he moves to college, his annual review (of a poor final EHCP) isn't finished.  Christine told the BBC that parents in the county have been - what sounds to me - bullied and gaslighted (my words) by the LA.

"We've been made to feel as parents that our standards are too high, our expectations are too high, we've been treated so badly and been put down, to stop you asking for support. They make you question if you know your own child. The whole of his life we've have had to fight for provision, but particularly since the SEND reforms, when we expected people to want to work with us. I don't see it changing-it's not about money, it's about attitudes how they talk to you and work with you. I've not noticed anything getting better."

LCC Council leader, Geoff Driver, also on the BBC Lancs programme, admitted the report was "scathing and damning" and "disgraceful", but leapt on to the points made about "turbulence" in leadership (not him, we assume) and attitudes of council staff, rather than funding. He then also sought to blame the previous administration (who left office last May) and said improvements were being made. Considering Cllr Driver is himself currently somewhat under a cloud over accusations of witness intimidation, I do hope he'll delegate this staff 'attitude adjustment' to someone else.

May not have been about funding, but it will be...

What he also didn't mention is that, according to the local paper,  they are considering deep cuts to the county's children's services in the coming budget. This includes:

Quite how things are supposed to get better if these cuts go through is anyone's guess.  I understand that short breaks have already been cut in the county and, while the under-construction Parent Carer Forum are asking them to reconsider the cuts, in the light of the budget, it's not likely unless they suddenly have a massive change of heart- which maybe this report will do, who knows?

Cllr Drive, in the interview, says things have begun to change, and of course, the council's response shouts about that, while failing to apologise to parents and their disabled sons and daughters. But like the tree that falls in the forest and no one is there to see it, did it make a sound? Clearly, no parents have heard it because there is no parental engagement - and Lancashire can only blame themselves for that.