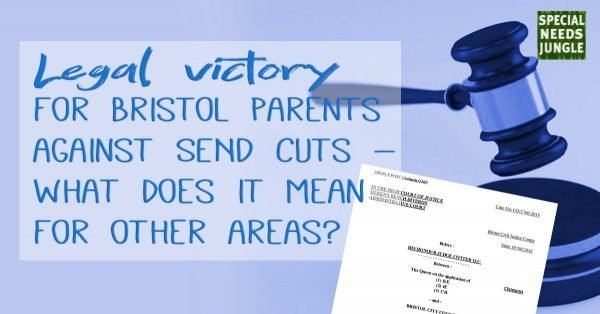 Last Friday, the High Court handed down a judgment with far-reaching implications for families of children & young people with SEND. Here’s what the case was about, what it might mean and why you should now consider doing the same if your area is making deep cuts to SEND…

What was the case about?

This case focused on SEND cuts – specifically, cuts that Bristol City Council planned to make to services funded through its High Needs Block, one of several pots of education funding that local authorities get from central government. The High Needs Block is a vital source of SEND funding, particularly for more complex needs: it pays for special schools, but it also funds extra support for pupils and students in mainstream schools and further education.

Like most local authorities, Bristol City Council’s High Needs Block has come under intense pressure in recent years, in large part because of the new statutory duties inherited under the 2014 SEND reforms. The Bristol High Needs Block ran into deficit – and in 2017, the LA started to draw up plans to rein in High Needs Block spending.

The Bristol plan required £7m of cuts over a three-year period to eliminate the deficit – with £5.1m of these cuts front-loaded in the 2018-19 financial year, roughly a 10% cut. Special school funding would take the biggest hit, followed by top-up payments to mainstream school and FE college students. Big cuts were also considered for specialist outreach teams and Bristol’s pupil referral unit.

These cuts would have had a massive impact on the life chances of many of Bristol’s most vulnerable pupils. And without the action of two families, these cuts would already have kicked in.

Parents fight back to protect their disabled children's education

Using legal aid, two families sought a judicial review of Bristol City Council’s decision making around the proposed cuts. Via their legal team, they argued that the LA’s High Needs Block budget should be quashed, because the LA hadn’t consulted properly or legally when drawing up its planned cuts.

The LA defended its decision, arguing that they hadn’t got to a point in their decision-making where they needed to consult fully – and that even if they were to have breached their legal duties around consultation, the end result for the cuts would not have been substantially different anyway.

The judicial review hearing took place at the High Court on the 24thJuly, and the judgment came out on Friday – you can read it here.

So what does that mean?

The judgment is great news for families of children & young people with SEND in Bristol; it’s quashed Bristol’s plans to implement cuts. In the meantime, the LA will have to find some way of plugging the High Needs Block deficit, most likely using council reserves.

You can read Bristol City Council’s response here– they have an option to appeal, but realistically it means going back to the drawing board, rethinking their High Needs Block plans, consulting properly and lawfully, and resubmitting them.

That process is unlikely to be complete before the 2019-2020 financial year – and it means including families fully. If you want a flavour of how far the LA will have to shift its attitude, this paragraph from the judgment is eloquently damning:

“There is no evidence, from the extensive paperwork evidencing the Defendant’s decision-making process, that members of the Council had any regard to the need to safeguard and promote the welfare of children, still less “actively promote” children’s welfare, when making the decision to proceed with the proposed savings. Indeed, the decision-making process appears to be driven entirely from the standpoint of ensuring a balanced budget by 2020/21.”

It’s also not impossible that this judgment might prompt more local authorities to consider judicial review proceedings of their own against central government. Over the last year, councils have loudly, repeatedly, and correctly, told the government that they don’t have enough funding to meet their statutory SEND duties. A London councillor recently hinted that several London LAs were considering a legal challenge on that basis. There’s no guarantee that this will happen – but it is worth watching.

The Bristol judgment does not automatically prevent LAs from making cuts to SEND services in the future. But it clearly reminds LAs that they have to put their proposals out for proper, lawful consultation, that proposals to cut SEND spending must have a lawful basis, and that LAs must consider whether their SEND services are sufficient. Given that most SEND services struggle to meet their legal obligations already, this judgment is going to make it very hard for LAs to push SEND cuts through. And that’s a very good thing.

As a parental Representative, I am absolutely delighted that the Bristol parents have been successful in their Judicial Review case today. Often Councils do not follow the appropriate procedures and legislation in making their budget cuts, nor properly consult those likely to be impacted and this results in those most vulnerable in our society being affected. While I recognise many local authorities are underfunded, these decisions cannot come at the expense of a child’s education.

As a result of today’s case, Bristol City Council’s high needs budget allocation has been quashed and they will have to reconsider their funding allocation. i.e. reverse their decision. This case sets a precedent for those coming after it and I hope families will continue to challenge similar unlawful decision making in their own local authority areas.

Every child deserves a right to education, irrespective of need. It is our duty to continue to champion that.

So can we relax our guard? Not entirely, no. There are other ways to restrain and suppress SEND spending without going through formal cuts, and LAs are increasingly likely to probe these in an environment of inept accountability.

Take East Sussex, for example – they aren’t formally seeking cuts to SEND this year, but they have spent the last year suppressing “the rising tide in demand” to stay within budget, and they plan to do the same again this year. The way they’ve gone about it needs investigation, according to local parents and schools.

It’ll come as no surprise to SEND families that once again, the law trumps all. But it’s really important to remember that parents were the driving force behind this result. It’s absolutely the case that you need excellent legal representation for a case like this – and the parents had this from solicitors Simpson Millar and barristers Jenni Richards and Steve Broach.

But the parents made this happen – they applied for legal aid, they made the decision to challenge the LA’s unlawful decisions, and they didn’t do it for their own benefit, but for the benefit of many, many other families. And if they can do it, then we can do it in our local areas too.

The Bristol parents remain anonymous. But another Bristol parent involved in the judicial review process has the following advice, if you’re thinking about following in their footsteps:

“Look closely at the decisions your local authorities are making re: SEND funding. Have they carried out consultations? Have they performed equality impact assessments? Have they shown regard to the people that these cuts will affect? In essence, can they make these cuts and stay lawful?”

And if you’re looking for other sources of advice on how the law can protect SEND services, then give this SNJ post from Steve Broach a read. Steve knows what he’s talking about – he was one of the barristers instructed in the Bristol case.