A while ago, you may remember we featured a post from Kathryn Rudd OBE, Principal National Star College and Chair of the Association of National Specialist Colleges (Natspec)

They were running a survey to determine if young people with SEND were being made aware of the potential choices they have for education after the age of 16. Thanks to everyone who took the time to give their views.

Today, Kathryn's back with the results of the survey. 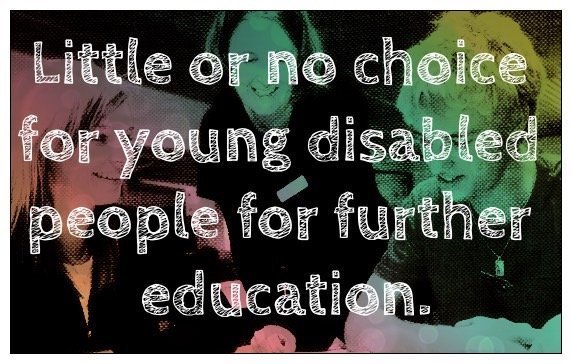 Our national survey shows that funding reforms and new legislation have created a postcode lottery for young people with disabilities.

More than 1,600 parents from England and Wales who have teenagers with disabilities took part in the survey commissioned by National Star College.

Parents highlighted their fears about a system which has removed choice and in which they face a constant battle to get the right information.

Over 80% of parents were only given information about further education options run by local authorities. Even though there is a statutory requirement on Local Authorities for them to provide the full range of options available.

30% of parents said they had been actively discouraged or stopped from finding out about other options - including specialist further education colleges.

A huge majority of parents – 87% – have no idea how Local Authorities are making decisions about their child's future.

The Children and Families Act, which it came into effect last September, promised a brave new world. It was designed to offer transparency, clarity and a more joined-up system.

Sadly this survey shows that young people and their families are reporting a very different reality.

The Act's objective was to create transparency in decision making and to allow parents and young people more choice.

But that isn't happening. This survey shows what we feared would happen – further education for young people with disabilities is simply a post code lottery. The system is failing young people and their families.

One mother who completed the survey said: "The Local Authority gave us no direction at all in regard of post 16 placements. The system and processes are just not in place to support all parents and outcomes rely heavily on the ability of the parents to source their own information and research what suitable provisions are available. It's little wonder that so many parents/ young adults are being failed."

The new Act states local authorities must list all the education options for young people with disabilities in what is called the Local Offer. That must include FE options out of county and those that are not authority run.

The survey found 63% of parents did not even know how to find out about the Local Offer and the options for their child.

One mother was told by her local authority that it was not launching the Local Offer until April – even though it had been law since September.

Another parent told how they were moving so that they could gain better options for their son.

"We are moving out of the county to where there will be much better provision for autistic teenagers," said the mother. "There is nothing here and I have had great fears for my son's future."

Alison Boulton, Chief Executive, The Association of National Specialist Colleges, said: “During the passage of the Children and Families Act, it was promoted as placing young people and families ‘at the heart of the new system. It will provide them with greater choice and control over services.’ (DfE 2013).

“Launching it a year later, Minister Timpson said, ‘For too long, families have found themselves battling against a complex and fragmented system. These reforms ensure support fits in with their needs and not the other way round - they will result in a simpler and more joined up system that focuses on children achieving their best’.

“This timely survey undertaken by the National Star College clearly shows that there is some way to go before the legislation achieves its important ambitions.

“Without impartial and comprehensive information, young people and their parents cannot make informed choices, nor can they be confident that they are being offered the choice of college that will best meet their needs.

“Ensuring young people are on the right course, and getting the support and therapy they need to further their independence, enables them to live more fulfilling lives and achieve good outcomes.

“Rather than Local Offers which promote the minimum, there needs to be some long term thinking in the system that supports young people and families to look to a positive future.”

Thank you so much for all the parents who took the time to complete our survey. We appreciate you sharing your experiences with us and we will now ensure that we pass on these concerns to those in power.