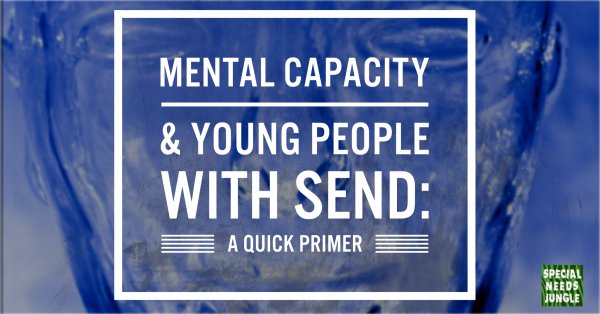 Earlier this week I attended the SEND seminar of the law firm, Boyes Turner who represent families having difficulties getting the SEN or disability support they need. The firm is based in Reading and solicitor, Ed Duff is very active on Twitter.

One of Boyes Turner's partners, Ruth Meyer, who leads their Court of Protection team, delivered a quick run through of the Mental Capacity Act, and while we did have a couple of posts about this during the reforms, they are now somewhat out of date, so I thought including a few fast facts here would benefit everyone.

You can read how mental capacity applies to young people in the SEND reforms in an explanatory annexe in the Code of Practice. It first appeared in a later draft of the CoP, shortly after Jane McConnell (formerly IPSEA CEO) wrote this post for us.

The most perplexing thing about the whole area for me is that while most young people are only considered to be an adult when they turn 18, if you have a disability, you are assumed to have the mental capacity to make your own decisions, often very important ones about education, care and support, when you become 16. From my own experience, my son's response was, "Can you do it and just say it was me?" I'm not sure many 16 years olds, special needs or not, would want anything else.

However, because we live in a topsy-turvy world, we must work with what we have and Ruth has kindly given me permission to repeat some of the main parts of her talk here for you.

"A person lacks capacity in relation to a matter if at the material time he is unable to make a decision for himself in relation to the matter because of an impairment or disturbance or the mind or brain."

This means they must be able to:

It's not a blanket assumption - the decision on whether a person has mental capacity is on each decision, as it may not apply in another issue or decision. As it says in the CoP, the person concerned can (and should) be supported to make their own decisions and be involved as much as possible. In the case of our young people, it will most likely be their parents/carers who will support them to make decisions, but for older or looked after young people, it may well be a solicitor, GP or even social services.

If the parties cannot decide on the capacity of the person to make a decision or whom should make it in their stead, a court will have the final say.

This is most definitely just a snapshot of the MCA and if you need to know about it in detail, you can find as much as you ever need to know (probably) at the links below:

Boyes Turner have now added their conference review with lots of information about all the SEND presentations including the slides.

Here is an update via IPSEA: A recent case has provided much-needed clarity on how Tribunals should deal with appeals involving young people. This also includes cases where the young person lacks the mental capacity to conduct an appeal themselves. The decision is a very positive one for young people as it confirms the wide category of those who might need an EHC plan, and firmly rejects the suggestion (being made increasingly frequently by Local Authorities) that it is only those who are seeking to study and gain further qualifications who would qualify for such a plan.