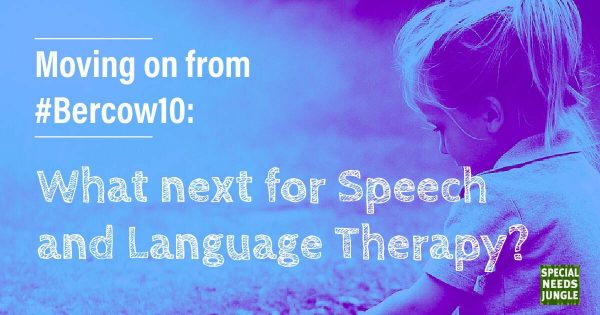 Recently, a review was published by the children's communications charity, I CAN and Royal College of Speech and Language Therapists to see what improvements had been made a decade after the Bercow report into children's speech and language services. We wrote about the review when it was launched in 2016

So how is it looking, 10 years on? Head of Evidence at I CAN, Mary Hartshorne, has written for SNJ about their findings.

What's the future for Speech and Language by Mary Hartstone, I CAN

In January 2017 the time was right to take a step back and take a critical look at the state of provision for children and young people’s speech, language and communication needs (SLCN). It was nearly ten years on from the previous Government review in 2008, then led by Rt Hon John Bercow MP. This time around, I CAN, the children’s communication charity and the Royal College of Speech and Language Therapists (RCSLT) undertook an independent review, aiming to paint a picture of the current ‘state of the nation’ very much from the perspective of children, young people with SLCN and their families.

On Tuesday 20th March, after 15 months of evidence gathering, analysis, discussion and engagement we launched Bercow: Ten Years On an independent of review of provision for children and young people with speech, language and communication needs (SLCN).

The report is uncompromising. Although we found many, many examples of really innovative, effective practice, we also found a disjointed system failing thousands of children and young people by not identifying their needs early enough or providing adequate levels of support. The report makes bold statements about the need for change. At the launch, it was well received; the feeling of support for children and young people hugely encouraging and the collective desire for action was palpable.
Over the course of the review we have been challenged on two counts:

There have been many positive changes which have stood the test of time over the last ten years. More school and early years staff are confident in identifying SLCN and supporting needs. Awareness in the youth justice system is much improved, with all youth offending institutions commissioning speech and language therapy (compared to none ten years ago), three times as many children with complex communication needs have benefited from a dedicated income stream for communication aids, our knowledge of what works in supporting children and young people with SLCN has grown exponentially, there are many local initiatives which really put SLCN on the strategic agenda in local areas.

We can link much of this directly to the action plan arising from the 2008 review: the Better Communication Research Programme, The Communication Trust programmes and resources, a funded role to develop AAC provision.....I could go on.

However, what has changed is the context in which we operate. A drastic economic downturn and a seismic shift in public services which we couldn’t have foreseen – across education, health and in particular the SEND system. A shift which has resulted in threats to specialist services, a significant ‘downgrading’ of speech, language and communication in the school curriculum, and no statutory requirement to report on spoken language beyond age five.
So yes, the themes are similar. But the solutions are different. They have to be because so much has changed. In our review we found:

What happens next then?

Well, as we heard yesterday, the report is just the start of the process, not the end. We need systemic change and to ensure that it will be sustained. So we have developed strong recommendations for decision-makers – for government, for local leaders and for regulators such as Ofsted and CQC. How will that be different? Well – in two respects.

Firstly, each recommendation is underpinned by a key lever such as a consultation or an existing framework we can change, and we have been having conversations with the people who are able to make those changes. We also had a commitment at the report launch from children’s minister Nadhim Zahawi that government would consider the recommendations and to respond to them.

Secondly, we are not just taking a top-down approach; the report is just the tip of the ice berg. Visit bercow10yearson.com and find a host of practical ways that parents, teachers, therapists, young people, and commissioners can take action. And for each suggestion, we’ve provided resources and support to help people do just that.

Perhaps the most compelling speech on Tuesday at the launch event was from 15 year old Lily, who appeared 10 years ago on the sofa at BBC Breakfast with her mother to share their experiences of specialist speech and language support. Ten years on, she reflected on her experience in her early years and in primary school. Now taking her GCSEs, and able to stand up in front of nearly 100 people to speak out, she is doing work experience in a nursery.

There, she can see children who, like her, would benefit from speech and language therapy. She challenged us to consider what their lives will be like in ten years time. We need to pick up that challenge. I CAN and RCSLT are committed to a yearly review of the recommendations in Bercow: Ten Years On.

Join us in making sure the right support is in place to ensure all children with SLCN have the life chances they deserve.
Mary Hartshorne, Head of Evidence – I CAN, the children’s communication charity.