Have you, as a parent, ever sat down and thought "is this it?"  Have you ever sat in despair wondering if it would ever get better?

It's heart breaking and it hurts but it is nowhere near as painful as hearing your child say those words to you.

It has taken me a bit of time to be able to write this post as the pain of hearing those words was almost my un-doing.  I'm seen as a strong woman who can handle anything that is thrown at me; and, to be honest, I like to perpetuate that myth - in the hope that it will one day be true.

However, a short while ago, my youngest son came home from school and as a mum, I knew something was amiss.  I asked him but he reluctant to share and said he was fine.  I presumed that it was just a small blip.  He hates not being able to do something really well and I thought he had just struggled with a lesson that day.  The one thing I do know is not to push him to share, he will always tell me when he is ready so I left him alone.

He went off to bed and Chris and I set about the usual evening routine of lunch bags, dishwashers, paperwork and trash tv.  Within an hour, he was back down the stairs but as all parents will appreciate, this is pretty much the norm (it's amazing how many excuses children find to come back down after bedtime).  How I wish though, that he had just had a silly reason to come down the stairs.

He sat down on the sofa, Chris and I grinned, waiting for the usual "does Mickey Mouse really exist" or "my sister won't let me sleep and I really want to sleep, honest".  We were totally unprepared for what came next.

My heart broke.  In fact as I write this, I have tears rolling down my face.

"Is this it forever?  Will I always be blind?"

I took a deep breath and tried to keep the emotion out of my voice.  I couldn't even look at Chris because I knew the expression on his face would mirror mine and I would fall to pieces.

"Because I don't want to be blind anymore, Mum."

I cannot find the words to express just how painful that was to hear. 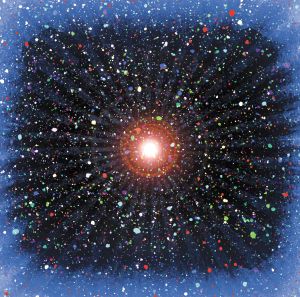 I felt as though my whole world had just exploded; I felt sick to the stomach, I wanted to burst into tears and I wanted to scream and shout with the pain I felt but the Queen of Comebacks was speechless.

I sat biting my lip and trying to think of an answer.  I could tell him about the amazing advances in science and explain how it was possible that one day, he may be able to have vision.  I could tell him that being blind wasn't that bad.  He wanted an answer and I had to come up with something.

"Why do you want to see, darling?  What has brought this on?"

It took some persuasion but he eventually told us that a friend at school had been talking about a magnifying glass and he wanted to use one too.  He was fed up of not being able to do everything his sighted friends can do.  He was also fed up of not being able to understand what things meant - his friend had tried to explain what a magnifying glass did.

How often do parents hear those words and laugh - I remember saying it to my parents and my mum's response was always "and it's not raining either".  However, this time I agree totally with my son.  It isn't fair.  There is nothing fair about it.

We spent almost an hour talking about why he was blind and how thrilled we were to have him here and healthy after his premature, eventful start in life.  We talked about the progress being made in science but also had to make it clear that this didn't necessarily mean he would ever have vision.  We also talked about all the things he would like to do but believed he couldn't.

He went back to bed and I sat and sobbed.  As a mum, I want to fix things and make things better so I choose to battle the system and get my children the support they need.  However, as a mum, here is something I cannot fix and that hurts more than any refusal from a service or any legislation change which doesn't benefit my child.  As hard as that may be, I can wake up the next day and do battle again.  I can't battle anyone to give my son vision.

As I write this, I am crying.  This was so painful and nothing and no one had prepared me for this.  I am also aware that my daughter is starting to realise that our family has different dynamics to her friends at school.  I know that soon I will be answering more painful questions.  How can I give an answer when I don't have the answers myself?

You may ask why I am sharing this story.  Well, Tania and I want to keep this blog real.  We want people to remember that we are also parents of children with a variety of SEN or Disabilities.  We may sit on boards and we may write about SEN reforms with an informed voice but we do that because we know how rough it can get, we know how events can break you and we know how it feels to fight a system for your children.  We are in this Jungle with you.

On a more positive note, J did what all children do and woke up the next morning as if nothing had ever happened.  I hardly slept, I had bright red eyes and as he came down the stairs, I was ready to grab him and give him the reassurances I thought he would need.

However, as he stepped onto the last step, he shouted

Life was back on track but that point-changing moment meant it wouldn't be the same track again.