My eldest son, K lives in a very literal world and we spend half of our day trying to watch what we say, and the other half paying for the fact that we forgot.  "Watching what we say" - there you go, that phrase would have K staring at our faces to "watch" what we are saying.

Inititally, this caused us heartache, for example when we saw him closing a door and shouted "watch your fingers" and he did.  He watched them as he closed the door on them.  We hadn't said "move your hand away from the door".  However, it has also caused us some huge entertainment.

For a long time, K believed my name was "Hiya".  When people visited us, the first thing many of them said as they walked through the door was "Hiya" and K truly thought this was my name.  When I intitally suspected this, I said to my parents "I'm sure he thinks my name is hiya" so that evening, at dinner, my dad said "Hi K" and K responded "Hi Grandad", then my mum said "Hi K" and he responded "Hi Grandma" and then I said "Hi K" and he responded "Hi Hiya".  Mummy Hiya was confirmed.  This did amuse us, especially when I left him at nursery and he would respond "Bye Hiya" or "See you Hiya".  Yes, I know that this could be interpreted as me laughing at my son but nothing could be further from the truth.  We have to get through this jungle with some sanity intact so for us, a sense of humour is essential.

As he got older, K realised that my name was Debs and he also understood that I was his mummy.  However, he chose to call me Debs.  He would return from school and say "Hiya Debs, where's Chris" and I would reply "Daddy is at work".  This went on for some time and still does, however, when we asked him why he called me Debs and not Mummy, he gave me a very confused look and replied "But you don't call me Son, you call me K".  So yes, why should he call me Mummy - which is in fact my relationship to him - when I call him K and not Son.

Sometimes his logic just stumps me for a response.  On one occasion, K had been settled in bed, however, when I finished making a brew and walking into the sitting room, he was sat in there.  I asked "Why are you not in bed" and his response was "because I am sat down here" 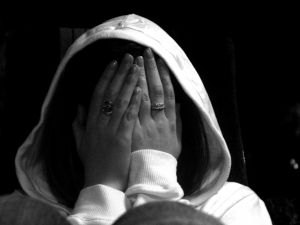 Of course, living in such a black and white world, with little understanding of social rules can cause some issues.  Usually mortification

We had one occasion when I was trying to plug him into a booster seat with one other child (in a booster seat) and a non-petite lady in there too - not an easy task.  So how mortified was I when I asked K to move towards me and he responded  "it's not me, it's her - she's fat".  Now as a non-skinny lady myself I was horrified for this poor lady and I told him very firmly that we don't use this word, it's not a nice word and he was plugged in and off they went.

That evening, I asked him how the day was and he replied it was okay, I asked about the journey and he said he was "squished" in the car because the lady was fat.  I explained again, this was a word that makes people feel sad inside and not a nice word to use.  The next morning, we walked out to the car and I suggested that it may be nice to apologise for using that word and he was happy to do this.

We got to the car, he sat down and as I plugged him in, he offered an apology.  "I am sorry I said you were fat yesterday, Debs has told me that it is not a nice word and it can make you sad inside which is not nice".  The lady accepted the apology, I smiled with pride and then........

"Debs, it's not my fault I am squished in here.  It's her, she is overweight and needs to go on a diet"  The driver at this point choked, I was looking for a hole to crawl into and K said "is that ok, Debs - I didn't use the word fat so no one feels sad."  Want to bet?

So yes, the literal world can be amusing, heartbreaking, mortifying and a real challenge but we try hard to keep smiling.   I would love to hear your experiences, maybe we can all help each other.  We now have a rule with K that he doesn't comment on people's height, size, colour or clothes unless they ask him to.    What rules or tips do you have?