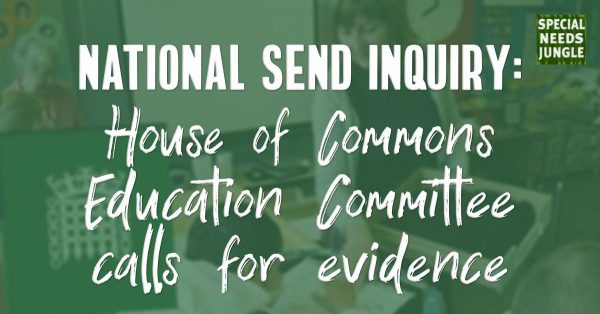 The House of Commons Education Committee has launched an inquiry into support for children and young people with special educational needs and disabilities (SEND).

This is music to my ears and I'm sure parent advocates are rolling up their sleeves and sharpening their pencils across England. It's something that the National Autistic Society and other organisations have been lobbying for some time and they will no doubt be putting their views in.  We will use your views that you've been sending us here to inform our own submission. If you'd like to submit, but can't face doing something for the committee itself, we could help you get your points in - but read to the end of this as they want certain things from you. Then can either click through to the SNJ link to send us what you want to say - or indeed, submit your own report to the committee.

The last time the Education Committee looked at SEND in such detail was as part of its pre-legislative scrutiny of the Children and Families Bill. You can read my report from then, in 2012, here [Pre-legislative scrutiny report, a précis and my views (SNJ 2012)].  The Committee will now be considering the impact and implementation of part three of the Children and Families Act 2014.

In 2014, the Government introduced wide-reaching changes to the SEND system, with the intention of offering simpler, improved and consistent help for children and young people with SEND. The Government claimed these changes would give families greater choice in decisions. The Committee’s new inquiry is intended to review the success of these reforms, how they have been implemented, and what impact they are having in meeting the challenges faced by children and young people with special educational needs and disabilities. From the announcement of inquiry, 18/4/18

This inquiry launch is very interesting timing, given the amount of mainstream media attention there has recently been over planned council cuts to SEND and the growing the anger about the generally poor state of available SEND provision. More parents are planning to follow Surrey parent, Alicia McColl's example, by launching Crowdjustice campaigns to fundraise for legal challenges LA cuts.

BBC Breakfast has been particularly dogged in following the SEND story, and we've been happy to work with them on their reports to bring this story to a far wider audience. The reporter, Jayne McCubbin, interviewed SEND Minister, Nadhim Zahawi who told her he'd, "Never seen an EHCP not worth the paper it was written on."

I spoke to Jayne yesterday evening about the inquiry. She told me BBC Breakfast had never had a story before that had sparked such a huge response. "Why were so many parents telling us they were fighting for their children when the reform had promised an easier, fairer process? Does this Inquiry mean the Government is listening? Will this be productive? We'll keep watching and reporting."

Jayne also questioned why an inquiry was even needed, when there is so much evidence already available from Ofsted, the Care Quality Commission, the Local Government Ombudsman, the Local Government Association and even reports commissioned by the DfE itself. Having met many families herself, Jayne predicts the committee will have to brace themselves for a tsunami of parental evidence. We completely agree.

Every day on social media and in my SNJ inbox, I see heart-breaking stories of children who are out of school through exclusion or lack of the right provision, or who are in mental health crises or heading there through being shoved into the wrong school. Parenting children with SEND requires dedication and constant vigilance at the best of times. But so many families, faced on the one hand with caring for their disabled children, while on the other, fighting for the right provision, are becoming more desperate, angrier and often can feel like they are at breaking point themselves.

The Children and Families Act and its preceding (and following) SEND pathfinders were supposed to mark the end of all this. Parents and practitioners were supposed to begin working together harmoniously. Confrontation was to be a thing of the past. Local authorities were supposed to have scrubbed-up SEND departments full of staff who had new attitudes and who looked forward to working co-productively with parents, so the child and their family were always at the centre of the system, not the other way round.

“It has been four years since major SEND reforms were introduced and it’s important we examine whether the Government’s stated ambitions for simpler, improved and consistent help for children and young people with SEND have been met. There are rising concerns about the quality and access to SEN provision which the Committee we will want to explore in this inquiry. The Committee’s current inquiry into alternative provision has heard considerable evidence that children with special educational needs are disproportionately excluded from school and over-represented in alternative provision. During the course of our quality of apprenticeships and skills training inquiry, we’ve also heard that with young people with SEN have faced significant barriers in accessing apprenticeships.

“All children deserve to access good quality education that meets their needs and supports them to learn to ensure that they are able to thrive and climb the ladder of opportunity. The 2014 Act extended provision to young people up to the age of 25 and the Committee is particularly keen to hear evidence about whether there is the right support available to enable young people to access appropriate post-18 opportunities such as studying at FE colleges and undertaking apprenticeships.” Rt Hon Robert Halfon MP, Chair of the Education Committee 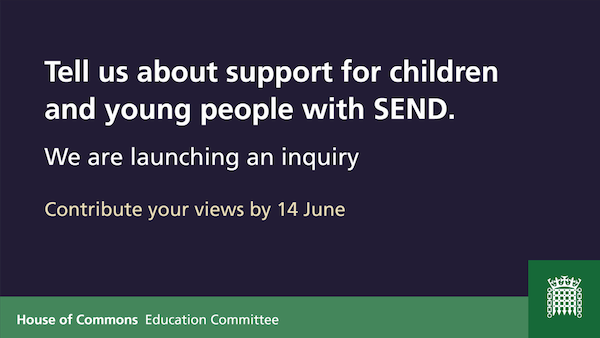 So, okay, there is a new system. No more statements (apart from the many thousands of children who still have one). Statutory support extended from birth to 25 years. Education, Health and Care Plans are in force that are supposed to provide holistic, wraparound care, combining the needs and provision for a child's education, social care and health needs all in one beautifully crafted document. I know, it doesn't say 'beautifully crafted' in the legislation, which is just as well because, unless you've been to the SEND Tribunal with a specialist lawyer, you're unlikely to have seen one like that.

It was always an ambitious idea and, in principle, a good one. The DfE managed to bring health to the table, it is running the extended trial for a more streamlined appeal system (though it's still not a "single route" to redress). The SENCo award is there to help train teachers. Personal budgets are available to provide more tailored provision. But while the structure is there, it is more akin to an abandoned, half-built construction site, whose sub-contractors have spent the cash and walked off the job.

You can't extend a service within a notoriously malfunctioning system without providing long-term funding and sharp, constant oversight. Funding formula changes have served to cripple High Needs Budgets, academisation and a fixation on performance and zero-tolerance behaviour policies have led to a rise in exclusions, or children not being able to get a place to start off with. The narrow view of inclusion meaning mainstream school rather than an adult life in mainstream society has shoe-horned generations of children into the wrong schools. And now the vicious grip of austerity has led to LAs cutting services for the most vulnerable, while simultaneously siphoning off DfE funds intended to improve their lives.

Things are not, to say the least, as they should be.

What's the inquiry looking at?

The inquiry will consider the impact and implementation of part three of the Children and Families Act 2014. It's inviting written evidence on the following by 14 June 2018:

The committee says, "In line with the general practice of select committees, the Education Committee resolved on 12 September 2017 to not investigate individual cases. The Committee understands that personal experiences will form an important part of many submissions, but requests that any written evidence directly addresses the terms of reference set out above."

Therefore, should you find the time to write a submission, please use the above as headings to frame what you want to say. You don't need to put something for all of it. Your submission needs to be a word doc.

Written evidence may be submitted confidentially (read guidelines here) or on the basis of anonymity; please make it clear at the beginning of your submission if you want this to be the case. Evidence may be edited prior to publication to remove personal information.

Who's on the Education Committee?

Is your local MP on the committee? Here's the list: